The NFL Combine results list Osweiler at 79" tall & 242 lbs. with a 9.88 inch hand size. Some say he's grown an inch since then, but at 6' 7" he can certainly see the playing field easily enough.

Unfortunately that isn't all that it takes to qualify as an elite NFL player prospect, and in some people's eyes he is neither. I'm taking the wait and see approach, but in the mean time, I thought I'd take a look at what I could find to see what it might be that John Elway sees in this young man.

It's quite obvious from the table listing his time with Denver below, that there is nothing much to see (2012 offensive snaps 33, 2.9% - 2013 offensive snaps 51, 4.2%), and so all we have in stats is prior to his pro career. Brocks' pre draft stats, are exactly why some folks have many doubts about his future as a pro, and why I like him.

I will always attempt to look as deeply as I can to try and find the stuff John sees. The table below shows everything that I could find, beginning with his Senior year in HS, and continuing through last year.

Osweiller attended Flathead High School in Kalispell, Montana. He played both football and basketball. In 2007 he committed to Gonzaga University to play basketball, but decided to focus on playing college football.

Osweiler got one start as a true freshman at ASU, which made him the first true freshman to start a game for the Sun Devils since Jake Plummer in 1993. He got one more start as a sophmore in 2010, and then took over the starting spot as a Junior in 2011.

The table below compiles his stats from HS through the 2013 season.

What I like is the fact that, whenever he has had the opportunity to start for a season, his completion percentage is pretty decent. Our problem is obviously the fact that we don't get to see him do much when he has been on the field. Generally it's kneel downs to close out the game.

I suppose his size, the fact that he is mobile, has a good completion percentage, a passion for the game, is a competitor and works hard could be all that John Elway and our coaching staff needs from a raw talent with very little in game experience at the collegiate level. 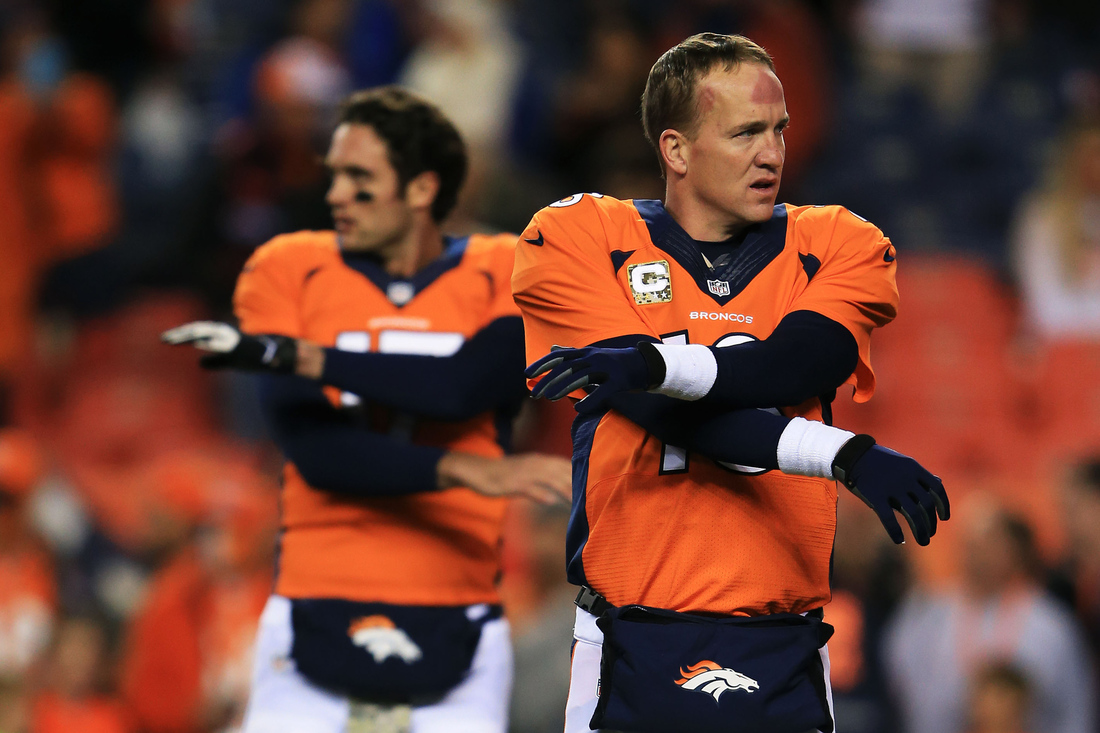 Couple that with what Quarterbacks Coach Greg Knapp said when he was asked, "What has the chemistry been like between the younger players (QBs) and Peyton Manning?"

"With Peyton in there, what do you think? It’s good. It has been really good to see Peyton taking time to help the young guys too. He’s very conscious about trying to pass on some of the stuff he’s learned to the young guys to help expedite their careers."

When asked how Brock Osweiler looked in the offseason he said,

I’ve been pleased and even within the 10 OTAs and the five minicamp practices, to see his progress from when I started on day one.

I’m a big believer that footwork helps make your accuracy go up in the game of football and it also slows your internal clock on decision making from progression one to progression two to progression three on any particular play.

And he has really been a sponge and has applied that and reaped some of the benefits from it so I’ve seen progress just in those few practices we’ve had together."

Brock isn't the only guy on our team who'd like to take over for Manning. What have you seen from Zac Dysert? Greg Knapp said:

I loved his playmaking ability (in college). He does have a little street ball, if you will, in him that he can create plays with his feet and moving out of the pocket.

But he too has – he’s actually older than Brock, so it’s surprising in that way – but he’s like Brock. He’s a sponge right now, he’s listening, he’s learning and what I like so far – what you always want to look for in a young guy – he’s not making the same mistake twice.

So I’m seeing good progress from him as well."

So, I suppose that we are still stuck with knowing very little about the two guys waiting in the wings, and still having to guess how this will all play out once Peyton retires.

That's the great thing about this game, and this team. If we knew everything in advance, then what fun would it be? What do you think?

Is John Elway an idiot for drafting these guys?

Does John know what it takes to be a QB?

Are both these guys a complete waste of time?

Will Zac beat out Brock for the starting role?

Shall we start a QB controversy before these guys even get their shot?

No matter what happens, GO BRONCOS!