John Fox was a Conference Champion Coach in 2013. I'd like to see him become a League Championship Coach in 2014.

Share All sharing options for: Three critical ways John Fox can get better

I've talked about it a few times, but my favorite quality of John Fox is his ability to mold his scheme to the strengths and weaknesses of his personnel. When Kyle Orton mentally surrendered to the throng of Broncos/Tebow fans in early 2011, Fox had no choice but to start Tim Tebow. Out went 2/3 of the playbook. In came the read-option.

Fox adapted to his personnel, and the Broncos won the AFC West.

When John Elway landed Peyton Manning, there was a philosophical clash. A conservative coach met a prolific passer. Foxball met the Hurry Hurry.  But instead of bringing back that 2/3 of the playbook, John Fox and then-offensive coordinator Mike McCoy decided to bring in Manning's playbook instead.

Fox adapted to his personnel, and the Broncos won the AFC West.

Still, Fox didn't adapt soon enough. A lot of people place a fair amount of blame on 2012's playoff loss on Foxball (running on 3rd and long to kill the clock so the Ravens couldn't mount a comeback oh look there goes Jacoby Jones past Rahim Moore), and I do too. It took a year, but Foxball fell by the wayside in 2013. Fox went for it on 4th and 1. Fox went for it on 4th and 2. Fox was aggressive, often.  Then in the 2013 playoffs, in poetic 3rd and long fashion, the Broncos threw instead of ran. They exercised Manning's arm and exorcised the conservatism of the year before.

Out with the orange? Is a uniform change coming?

A rumor is spreading that the Broncos are working with Nike to help the franchise become "the Oregon (Ducks) of the NFL."

Quotes: Broncos depart for the offseason

Broncos players cleaned out their lockers Tuesday, lamenting the missed opportunity that was Super Bowl XLVIII.

Out with the orange? Is a uniform change coming? Quotes: Broncos depart for the offseason

Fox adapted to his personnel, and the Broncos won the AFC.

I say all this to highlight Fox's greatest strength, because I'm about to highlight what I feel are some of his greatest weaknesses. I'm about to point out some of his failures, particularly as they relate to Denver's 43-8 Super Bowl loss to Seattle. And I don't want to confuse anyone into thinking I want the Broncos to fire John Fox.

The Broncos were ridiculously out-game-planned in Super Bowl XLVIII. Denver's plan coming in was, well, the same as all of their others. Short passing game. Yards after the catch. Peyton Manning.

It had worked, this leaning on Peyton Manning and Demaryius Thomas and Wes Welker and Louis Vasquez, just about all season long. But the Seahawks are a team perfectly equipped to beat a short passing game yards after the catch Peyton Manning offense, and that's where the Broncos failed. Denver coaches overestimated their own offense and underestimated Seattle's defense (MHR did too), and the results were violent, turnover-inducing, and dream-shattering.

The Broncos were not prepared for this level of physicality in the secondary. Demaryius Thomas certainly stepped up to the plate, but the offensive line didn't. Eric Decker and Julius Thomas disappeared. Peyton Manning became mistake-prone in the face of four-man and even three-man pressures.

"All we did was play situational football," Richard Sherman told the MMQB. "We knew what route concepts they liked on different downs, so we jumped all the routes. Then we figured out the hand signals for a few of the route audibles in the first half."

Physically and mentally, the Broncos' offense was beaten.

Perhaps most disappointing is that the Denver Broncos had advanced to the Super Bowl, the Biggest Game on Earth, and they spent those two weeks... just rehearsing what already worked. There was hardly a wrinkle at all. The Seahawks read Denver's offense like a book.

"Now, if Peyton had thrown in some double moves, if he had gone out of character, we could've been exposed," Sherman continued.

The in-game game plan was worse; the Broncos didn't adjust at all. The Seahawks were pressuring Peyton Manning into mistake after mistake, yet Knowshon Moreno and Montee Ball pass protected a mere six times on Manning's 49 attempts.  Instead of giving the Seahawks things they hadn't seen before, Peyton just went after Demaryius Thomas, again and again, while Welker and Decker mostly wasted steps underneath.

Adam Gase is primarily responsible for the offensive game plan, so this failure was mostly his. Hopefully Fox holds him accountable.

John Fox finished the 2013 season and postseason with a piss poor challenge rate, only winning one of his eight challenges on the year. Those failure included a challenge in the Super Bowl that cost the Broncos a timeout in a Championship game.

That one-in-eight mark is pretty bad, but it doesn't paint the entire picture. What about all of the non-challenges? What about all of the blown calls by the refs that never saw Fox's red flag hit the field? Are we really supposed to believe that there was only one challenge-able play, all year long, that the refs missed against the Broncos? I can think of another one right off the bat. 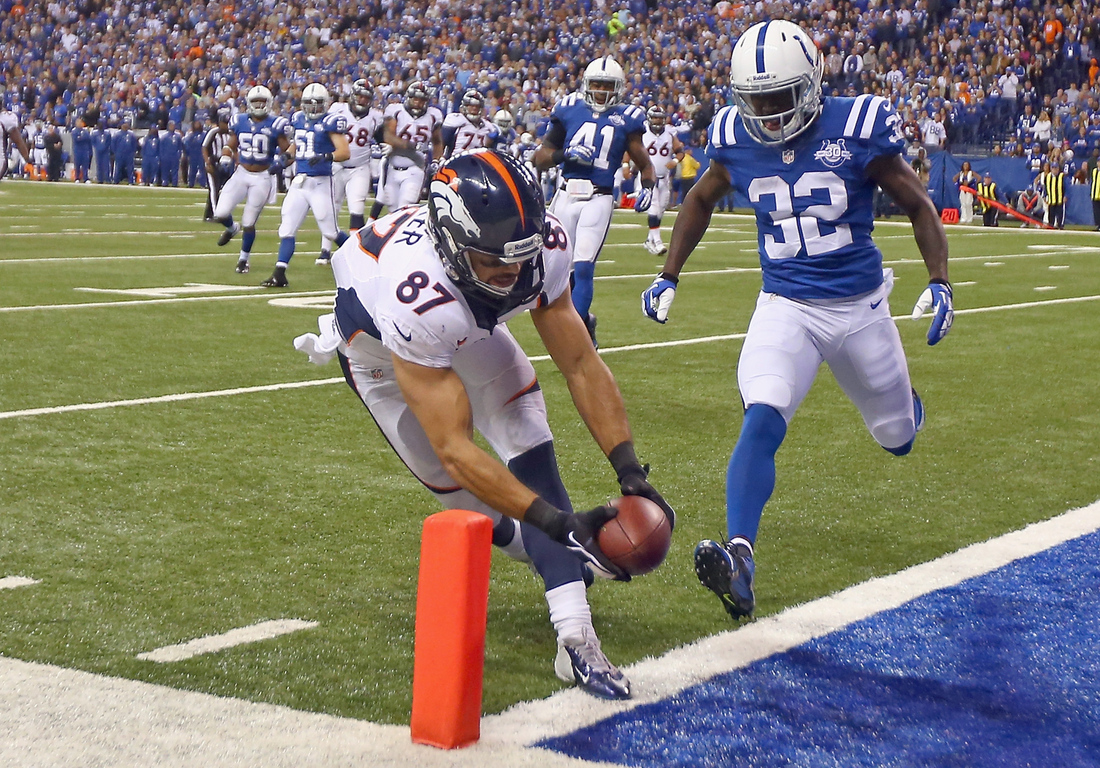 John Fox did not throw a challenge flag for this play, which was ruled incomplete. Photo Credit: Andy Lyons

So who is helping Fox decide when to challenge? In the past, Mike Shanahan had a guy (or group of guys) in the booths upstairs, giving him advice whether to challenge. I'm assuming Fox does too. So who's to blame for this rate?

There are a lot of potential variables in play here.

Whether it's understanding his own tendencies as a coach in 2013 and addressing them, or finding better advice-givers up top, Fox needs to hold himself and his staff accountable for his 1-in-8 challenge record and make it a goal to improve it.

The Broncos defense stepped up a lot in the playoffs, in every way but one - turnovers. Denver did not force a single turnover in the 2013-2014 playoffs. Part of that is personnel - Fox only has so much say in the guys that line up on defense - but part of that could be coached better, too.

Look, there's no shame in blatantly ripping off your peer. I'd love to see the Broncos implement Turnover Thursdays in 2014.

How? They practiced, with focus, forcing turnovers. They practiced it so much that they dedicated a day each week to it - something Pete Carroll called "Turnover Thursdays."

Why shouldn't the Broncos do the same?

Look, there's no shame in blatantly ripping off your peer. Imitation is the finest form of flattery. If you can't beat them, join them. Keep calm and rip off. I'd love to see the Broncos implement Turnover Thursdays in 2014. The defense would improve in turning the ball over. The offense would improve in not turning the ball over - Russell Wilson jokingly called the sessions "No Turnover Thursdays."

There is no bigger play in the NFL than a turnover.

John Fox was a Conference Champion Coach in 2013. I'd like to see him become a League Championship Coach in 2014. These were his failures. These are the areas in which I hope he improves in 2014. Denver's Super Bowl aspirations depend on it. They depend on him.