CBS Sports NFL writer Jason La Canfora reports that a number of teams are interested in Miami corner Nolan Carroll. Could Carroll be a potential fit for the Broncos defense? He's certainly worth a look.

Share All sharing options for: CB Nolan Carroll could be cheaper option than Dominique Rodgers-Cromartie for Broncos

Dolphins CB Nolan Carroll getting a lot of interest. Had one of best completion % in NFL; his advanced stats very similar to Sam Shields

As La Canfora mentioned in the tweet, Carroll has similar advanced stats to Sam Shields, who just signed a lucrative contract to remain in Green Bay. While the Broncos appear to still have their priorities set on bringing back Dominique Rodgers-Cromartie at corner, that may be a little more pricey than they'd like following the signing of Shields. Nolan Carroll may be a name for the Broncos to keep in mind, if they choose to look for a cheaper alternative to DRC, or simply wish to add another corner after coming to terms with Rodgers-Cromartie. 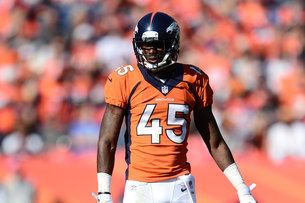 Opposing quarterbacks did not fare well when throwing at Carroll, with just a 65.0 quarterback rating when targeting receivers who were covered by the Dolphins corner. This number is identical to the rating that opposing QBs had when throwing at Chris Harris; DRC registered a 67.8 QBR against in 2013.

While there are no reports of the Broncos contacting Carroll, La Canfora mentioned that he is receiving interest from a number of teams. The only team directly tied to the corner as of yet is the Vikings, as reported by Chris Tomasson of Pioneer Press. Although they have not contacted him yet, Carroll should be a player that Elway and the Broncos at least take a look at and gauge the price of the young corner.

What do you think Broncos Country, does Carroll sound like a fit for Denver? Who else might be a target of Elway's in the CB market?

Be the Broncos 2014 General Manager: Cornerback