Over at NFL.com, they are running a bracket to determine the greatest QB of all time. Well, as of last night newbie Russell Wilson was beating Peyton Manning by about 35K votes....

That farce of a result (at least thus far)

Has led me to fill out my own bracket. For the purposes of my bracket, Russell Wilson isn't even included. I mean, put in a few more years and pay some more dues youngin. That leaves Peyton Manning with a first round bye. 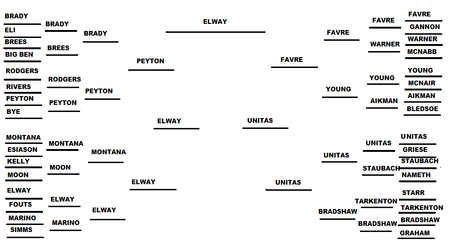 I'm ok taking Brady ahead of both Brees and Eli though cases could be made for either of those two over Brady. We get down to the final two of that bracket and we have a rematch for the ages. You're never going to convince me Brady is better than Manning. I've watched both play plenty now and IMO opinion, it's not even remotely close. Peyton wins going away.

On the bottom the only real upset is possibly Warren Moon over Jim Kelly. I've always liked Moon and the way he played the game and I give him the nod here. In the end we have Montana vs. Elway. For once, chalk one up for the good guys. Montana may have the numbers, the four rings etc, but give him Gaston Green, Vance Johnson, and Mark Jackson to play with rather than Roger Craig, Jerry Rice, and John Taylor. Elway did more with less and was by far the better football player.

What we have set up is a #joygasm for Broncos fans past and present: Manning vs. Elway for the semi-finals.

On the other side of the bracket I think the top bracket fills itself out. The only place I might choose differently is Kurt Warner. I would have no problem putting Warner ahead of Favre on the strength of his prolific postseason play alone. In the end, I give the edge to Favre and he beats Steve Young in the semifinals.

On the bottom bracket, I'd like to see someone argue against Johnny Unitas, but then again it's all subjective.

After all that it is Manning vs. Elway and Favre vs. Unitas.

If Manning ends up with another season like last year or even makes it to/wins another Super Bowl, I think he surpasses Elway. Until then, the Duke is still tops and makes it to the championship round. I may not have seen Johnny Unitas play, but I've seen the research and I know the history. His history is greater than Brett Favre and we end up with a dream match of Elway v. Unitas.

In the end, Elway is still the man. Use the same bracket if you'd like and fill out your own. Have some fun!

Denver Broncos unlikely to play in NFL's season opener at Seattle - The Denver Post
A few details are trickling in regarding the Broncos' 2014 preseason schedule.

Joe Ellis leading Broncos to NFL owners meetings in Orlando - The Denver Post
A contrast to his surroundings, Joe Ellis strode unassumingly into the gilded lobby of the Ritz Carlton resort here Sunday.

Broncos Draft History: Running Backs
A look back at running backs the Broncos have selected in the NFL Draft.

Reports: Raiders rework Matt Schaub’s contract | ProFootballTalk
The Raiders have reportedly adjusted quarterback Matt Schaub's compensation for 2014. According to ESPN's Adam Schefter, the Raiders have reduced his base salary. Per NFLPA data, Schaub was scheduled to make $10 million in 2014.

Brian Billick out at FOX | ProFootballTalk
Brian Billick will no longer serve as an NFL analyst on FOX. Jason McIntyre of TheBigLead.com first reported, and PFT has confirmed, that FOX decided not to renew Billick's contract.

Mark Cuban warns NFL "hogs" risk eventual "implosion" | ProFootballTalk
As NFL owners are gathering in Orlando to count their money and plan on how to make more, one of their NBA counterparts is firing a warning shot. Dallas Mavericks owner Mark Cuban told reporters tonight that the NFL is bordering on over-saturation of the market, with dire consequences.

Buccaneers trade Jeremy Zuttah to Ravens for '15 pick - NFL.com
The Baltimore Ravens got more offensive line help, trading a 2015 draft pick to the Buccaneers for center Jeremy Zuttah, who will rework his contract as part of the deal.

Mike Williams stabbed in thigh, released from hospital - NFL.com
Tampa Bay Buccaneers wide receiver Mike Williams was discharged from a Tampa hospital Sunday after being stabbed in the thigh. An arrest warrant has been issued for Eric Baylor, Williams' brother.

Mark Davis: Oakland Raiders thinking about L.A. - NFL.com
Owner Mark Davis believes the Oakland Raiders' stadium situation is entering a crucial juncture, and he can't help but think about his options to the south.