Yesterday was Von Miller's 25th birthday. Because of that milestone event, we thought it would be fitting to go back and rank the top five performances of his young career.

Most people remember this game for the epic 95 yard game winning drive led by Tim Tebow. What gets lost is just how dominant Von Miller was. He racked up 10 tackles including a staggering 9 solo to go along with 1.5 sacks. When you talk about a complete pass rusher like Von, you have to pay homage to his skillset and respect his utility belt. On this day Batman would pull out his bull rush and use it to drive RT Brandon Moore straight on his back before taking down Mark Sanchez. To this day this is one of my favorite Von Miller plays.

The first three sack game of Von Miller's career came on this day. The first was a freebie. Nothing better than getting a free shot after not getting blocked. The next two are indicative of Miller's playmaking ability. Both caused Phillip Rivers to fumble, the 2nd was picked up by Wesley Woodyard and led to a Denver Broncos touchdown.

Think back to the 2011 playoffs. Up huge late on 3rd and long, Brady took the snap from shotgun....and punted. What ensued was a bubbling over of frustrations from Von as he and a few other Broncos drew some unsportmanlike foul penalties.

Since then, Brady and the Patriots have become Miller's property. There are certain games where you can quantify a player's impact and certain games where his mere effort and presence makes such an impact that regular stats do not suffice. Sure he had a couple of sacks and even forced a fumble, but the play I remember most happened on Denver's goalline. On 3rd down with the Patriots looking to extend a 14-7 lead, Von knifed through the offensive front stretching out to take Bolden down by the shoelaces. Von Miller's run defense is so underrated. 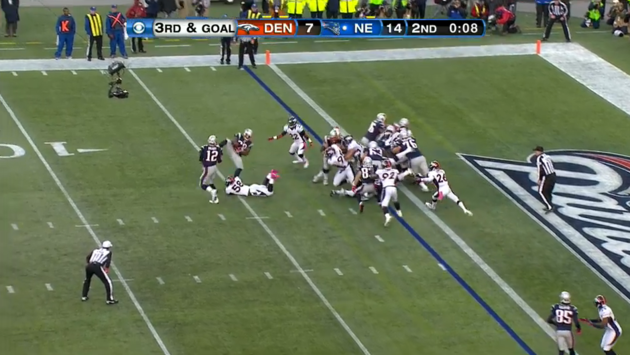 After ending a 6-game suspension, it took Von a bit of time to get into the groove of things. This is one of the performances from last season that Broncos fans should envision when thinking of his return off an ACL injury. Two big plays contributed to 14 points on the scoreboard. After Wesley Woodyard stuffed the Patriot runner to cause a fumble, Von Miller was Johnny on the spot scooping up his bounty and taking it 60 yards back to the house.

Then, Von Miller hit Brady from the blindside causing a fumble that Terrance Knighton would pick up and run with inside the 10. From there the Broncos offense punched it in giving the Broncos an early 14-0 lead.

This was a meeting of Batman and Superman. I don't want to admit that Superman got powned, but that is precisely what happened. Playing the role of spy on Cam Newton all day, Von disrupted every facet of the Panther offense. He routinely stuffed the ballcarrier in the backfield for a loss, he caused pressure after pressure--one led to a Tony Carter pick-6 to cement the game, but perhaps the most impressive was how he tracked down Cam Newton like he owed him money.

My favorite play of the game came on 3rd down. Von dropped back to medium depth just stalking the every movement of Cam Newton in the pocket. Newton slid to his left and hesitated as if he were going to take off and run. In a split second, Miller read Cam's indecision and pounced to his kill with elite speed and athleticism. Cam is one hell of an athlete, but he's no Von Miller.

Nevermind, I had it wrong. Von Miller is Batman by night....by gameday, he's the real superman!

What about eatin' greedy and those sack dances? Everytime Von Miller gets a sack and does a dance, a donation is made to his charitable foundation "Von's Vision" which aims to provide low-income children with proper eye care and glasses.

Happy 25th Von! We hope your time as a Bronco will continue to build your resume as one of the most dominant forces in the game.

These were my top 5 Von Miller performances as a Bronco, what are yours Bronco Country?