DeMarcus Ware may have stolen headlines, but the shrewd acquisition of Pro Bowl safety T.J. Ward has Broncos fans most excited, according to our poll results.

We asked you which Broncos free agency move you most preferred, and you made it clear - Broncos fans believe safety T.J. Ward's signing was the best acquisition the Broncos made in 2014 free agency.

In our poll from March 19th, Broncos fans were asked which free agent acquisition they thought was best - S T.J. Ward, CB Aqib Talib, DE DeMarcus Ware, or WR Emmanuel Sanders. Ward ran away with over 50% of the votes, more than the rest of the options combined, while DeMarcus Ware finished second with 29%.

These poll results fall in line with my thinking as well. Ward is younger than Talib and Ware, and he'll have a bigger impact as starting strong safety on defense than Sanders will as a second (or third or fourth) wide receiver on offense. He has already made the Pro Bowl, but there is still untapped potential there, as Ward is only 27 years old. His deal was also, by far, the sweetest against the Broncos' cap, which I believe is a big reason he came out on top. 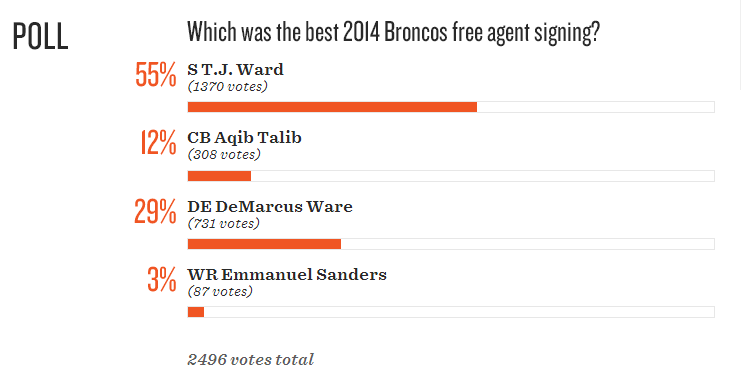 Still, it was by no means a consensus. Let's look at how people argued for each option from the comments.

"I vote T.J. Ward, but not just for his physical presence an his contract being the steal of FA, but his intangibles, IMO are superb," writes MusicalManiac27-MM27. "He's a natural leader (hence his nickname "BOSS" Ward). Also, his preparation - going hard in practice (practice field is where it all starts) by really studying the game and the opponent."

"DeMarcus Ware is the blockbuster move… the one that makes us an elite defense that could even be better than Seattle," writes NHPeytonFan18. "I know there is a bit of a risk that he returns to form but I think Ware is motivated with a huge chip on his shoulder and will thrive playing with Von and company.

"I had to go with Aqib Talib on this one," said zeckels, who went on to describe how taking Talib from the Patriots caused a domino effect toward New England that saw them spend big on Darrelle Revis and become exposed as injury report frauds.

"I went with Emmanuel Sanders which means 96% of you disagree with me," said heykyleinsf. "Fine. I think we stole him and I also think that halfway through the season, you’ll agree with me."

Thanks to everyone who voted in the poll and left comments! I think we all agree that each of these players add value to the Broncos, and that we're all excited for the 2014 season and beyond.