Changing the Broncos' Uniforms : A Race Against Nike

Guest contributor Spilly makes some modifications to the Broncos' uniforms before Nike has a chance to ruin them for us.

Share All sharing options for: Changing the Broncos' Uniforms : A Race Against Nike

Hello everyone. First of all, I'd like to say thanks to Kyle here at MHR for inviting me to write silly things about our Broncos. I read MHR all the time and find it one of the best places to get insightful, engaging Broncos content. I will be providing none of that. I routinely post food-related nonsense over at the SB Nation mothership, but I often have to dial back the Broncos homerism there and say nice things about other teams. NOT SO HERE. I hope you enjoy these as much as I enjoy making them.

Out with the orange? Is a new Broncos uni coming?

What in the hell are the Buccaneers wearing?

Out with the orange? Is a new Broncos uni coming? What in the hell are the Buccaneers wearing?

Earlier this week, the Tampa Bay Buccaneers unveiled new uniforms consisting of random shreds of brown fabric and a bizarre, reflective calculator font that if you read upside down spells naughty words. The internet responded exactly how it responds to anything: 45 seconds of rampant vitriol, malice, and derision until it forgot and reverted to corgi pictures and True Detective theories. Still, the fact remains, Nike swooped in and took a franchise that had a signature look and color scheme, XTREMIFIED IT, and continued on the path to turn everyone into the Oregon Ducks.

What does this mean for our beloved Broncos? The Broncos are undoubtedly a marquee team and get a ton of national exposure - as an out of state fan, I was able to watch 14 out of 16 games without Sunday Ticket - and as long as Peyton Manning still has a neck and hasn't choked on tapenade, they'll be a league leader for the foreseeable future. It makes sense that Nike would have its sights set on Denver, and we know that Broncos brass has let them completely remake the team before.

So, in order to head off certain ruin, I went ahead and redesigned the Broncos uniforms with NEW, FUTURISTIC, UNIQUE ELEMENTS that should set our team above everyone else. Let's get started: 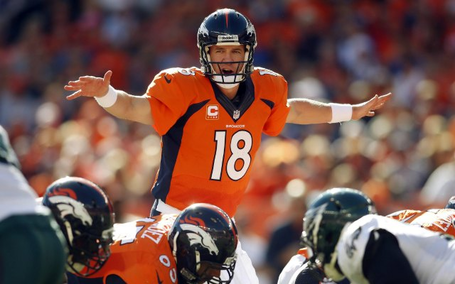 STEP 2) It's okay. I mean, I like the orange. Even if it apparently stripped the team of Super Bowl powers, I enjoy seeing the stands at Mile High as one sheet of orange. It's our signature color in the NFL - the team should keep it. But it has to be said: the uniforms are getting a bit dated. That font screams 1990's. And now, teams are loading up on EDGY, ANGRY, POINTY FONTS. We can go one better: 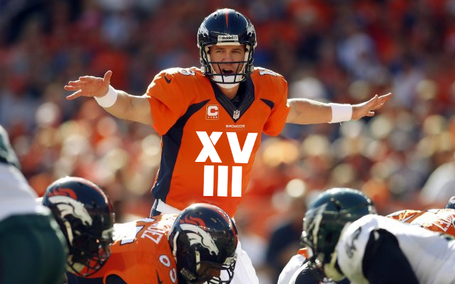 You know who were edgy, ruthless soldiers on the field of battle? Roman Centurions. I've seen enough Roman soldier stereotype halloween costumes to know that the only thing a centurion needed in battle was a brush helmet, a plastic breastplate, and a sword. Why not funnel this ruthless brutality into a font with roman numerals. Legibility? Ease of identification? HA. Much like pants, the Romans didn't need any of these to be effective. Neither should we.
Sure, you might be saying "Oh but Spilly, how do you tie the Romans to the Equine Rodeo Participant theme?" and I would answer: "The same way a blinking red VCR screen evokes Buccaneer imagery"
STEP 3) It's still sort of boring. We need it to pop more. Tampa was off to a good start, outlining their numbers in reflective tape. We could do better. Let's add a gratuitous drop shadow and make the entire number out of that reflective stuff. It'll double as a nighttime jogging outfit! 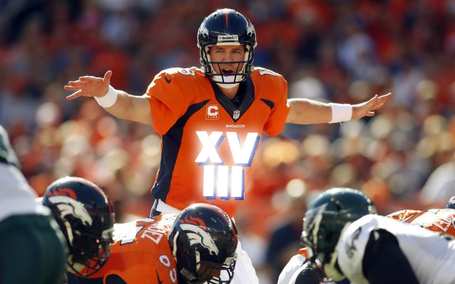 STEP 4) The Broncos helmet was awesome when it came out in 1997. The stripe is sorta kinda like an orange mane! Oh man, the cyber-horse on the side is angry! Nowadays, it's lost a bit of luster. It's okay, but we can do a lot better. Do you know what seems amazing and never, ever feels like a bad decision a few years down the road?
BUTT TATTOOS.
AND ALSO CHROME HELMETS. 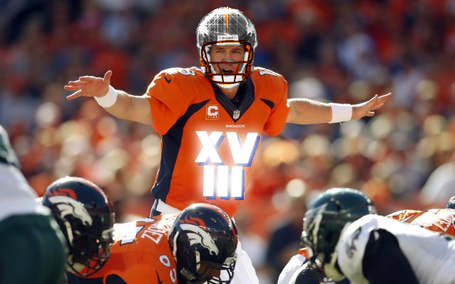 Look at that sheen! I had to apply 3 different Photoshop filters just to approach the level of awesome I had in mind. Opponents will be able to see the fear in their own eyes when lining up across from the Broncos. That's a selling point! In addition, I gave it a CHROME ORANGE facemask because if Nike has taught me anything, it's that the order of importance in all design choices should be extreme, excess, and moisture wicking.
STEP 5) I remember back in the halcyon days of 1990's internet, when the current Broncos uniforms came out. I was actually writing a Broncos blog at the time, (except there were no such things as blogs and it was dumb and terrible and hosted on Geocities). People instantly saw that when the players lined up, the side stripes looked like Nike swooshes. It's true! Like the FedEx arrow, once you see it, you can't unsee it. Nowadays though, bizarre and superfluous striping is the norm. We need to grab back everyone's attention. But how? Has every pattern already been used? 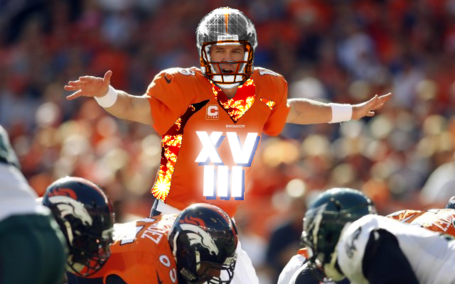 FRACTALS. THEY'RE NOT JUST FOR MATH NERDS AND LAZY SCREENSAVER DEVELOPERS ANYMORE.
Think about it. Each side stripe is an intricate and detailed fractal pattern based on math only conceivable by computers and large men with tremendous, bulbous heads. We are lucky enough to have one of those at quarterback.
STEP 6) Still, it's looking a bit...Hawaiian shirt. And it's still not nearly EXTREME enough for today's jersey consumer willing to plop down over a hundred dollars for a replica that cost seventeen cents to produce. They need something bolder. Something brighter. Let's just keep applying that 'glow' filter. 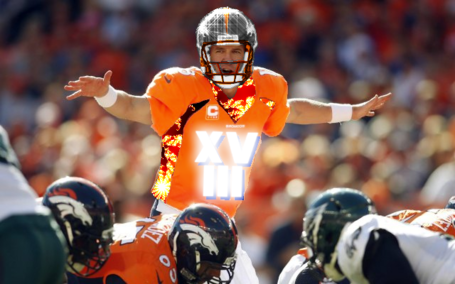 Eh, closer. Do it again. 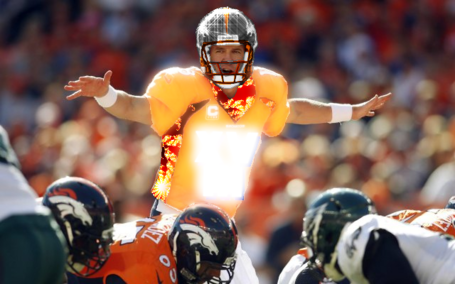 Now we're getting somewhere. Luminescent fabric! We won't even need stadium lights! That will make the planet happy! (Caution: The fabric contains enriched uranium. Please dispose of used jerseys in the sealed, lead dumpsters at each exit gate of the stadium where you picked up your injury waiver.)

STEP 7) This is good. We've got a signature look. But what we need are a few elements that will appeal to the players. Sure, they may look amazing, but if we can shoehorn in something about performance fabric that helps shed tacklers, it'll be a hit for sure. 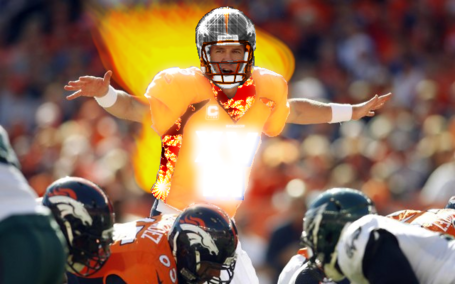 That's it! Set the jerseys on fire! What else would cause a would-be tackler to have second thoughts? Sure, you may bring Demaryius Thomas down short of the first down marker, but you also have third degree burns. Was it worth it?
In addition, we'll tell everyone that the reasons our players are being immolated for our entertainment is for historical throwback accuracy. Surely you're aware of the 1962 Broncos jersey bonfire, right? It all comes full-circle.

STEP 8) The only real downside here is that sooner or later, smoke will start filling the stadium, which may impede the progress of Broncos players as they run untouched down the field among the charred corpses of their enemies. So, in order to promote player safety, we'll install the following new feature to Broncos helmets: 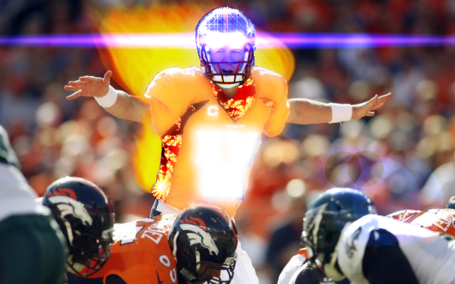 Xenon headlights! Watch the beams cut through all of that smoke and ash! In addition to enhanced visibility for the players, the fan in the stands will be able to find them through the smog. Those of you watching on TV will see amazing LENS FLARES as yet another team forfeits the game to our unstoppable football conflagration. It's truly a win for everyone. Well, everyone who is a Broncos fan.
----------------
Spilly is a Lego minifig who is stuck in western Pennsylvania and cheers for the Denver Broncos and the University of Pittsburgh. He hopes the Broncos draft Aaron Donald somehow just to make him happy, needs be damned. You can follow him on Twitter at @IAmSpilly and let him know much of your time he's wasted.