In a tweet posted Saturday (then deleted), Broncos right tackle Orlando Franklin said he is "pissed" and "it just became personal."

Share All sharing options for: Broncos' Orlando Franklin says he is "pissed" and "it just became personal"

(Editor's Note: despite the date, this is not an April Fools' joke.)

For many years, people have understood that social media is not a place that forgets. Once something is posted on the Internet these days, it can never be truly erased, despite any delete or undo function. Once you hit that send or submit button, the world will know, and there's no turning back.

That's the truth Broncos offensive lineman Orlando Franklin is facing this week, as his tweet over the weekend has us wondering what caused him to be "pissed" and what has him saying, "it just became personal." Franklin subsequently deleted the tweet, but a screenshot preserved it, as seen below: 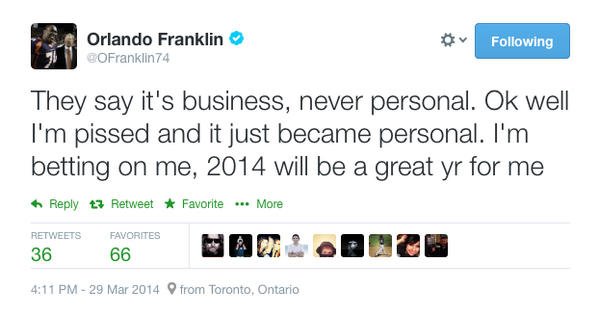 Franklin, the Broncos starting right tackle for the past three seasons, is set to become an unrestricted free agent after the 2014 season. Did the Broncos previously promise him a contract extension that they failed to deliver? Perhaps they low-balled him on an offer this past week?

It's also possible the Broncos approached Franklin about moving to left guard this season, a move we've speculated about often. It's a move that John Fox admitted he is considering, and a move that John Elway discussed with Franklin's agent, Drew Rosenhaus, over the owner's meetings, according to the Denver Post.

Perhaps it's both. Perhaps Franklin is pissed because the Broncos have told him they're moving him to guard during a contract year. The top 20 tackles in the NFL make between $6 and $12 million per year. The top 20 guards make between $3 and $10 million. Franklin has graded as a top 20 tackle in the NFL over each of the last two seasons, according to ProFootballFocus.com. If the position switch were to stick, it might cost Franklin millions.

Of course, without any clarification, we can't know what Franklin's tweet was regarding. It might not be about the Broncos at all. But the timing is right for us to infer a position/contract dispute could be brewing between Franklin and the Broncos.

Franklin did not respond to our request for comment.

What do you think is irking the Broncos' right tackle?