Broncos coach Eric Studesville, Chiefs coach Andy Reid, and more on the qualities of an NFL running back

Some interesting quotes on the qualities both coaches and quarterbacks appreciate in a running back.

Share All sharing options for: Broncos coach Eric Studesville, Chiefs coach Andy Reid, and more on the qualities of an NFL running back

As part of my regular job this past year, I had the chance to watch a number of coaching symposiums. Now some may know that, at times during the off-season, NFL coaches and assistants tour and give speeches and answer questions. I had the chance to listen to a few of these and while I cannot post the audio of video, I wanted to share some of the quotes with you. These are word for word unless noted otherwise in parenthesis.

The most important offensive game decision comes after the 1st quarter when you've seen the defense's plan towards you and you look back on the three game plans you brought into the game and deciding which to go with. Waiting till half time could be too late so having your coaches already thinking by the 3rd or 4th drive about what the defense is doing and what game plan will be most effective against their devices is so important. The most successful coaches in any league are those that come prepared with backup plans that are grounded and being smart enough to adjust early on if needed. In-game coaching makes or breaks success. 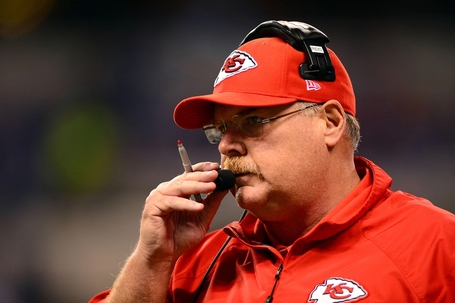 When creating the game plans for a game on offense you never, never, ever, ever, is that enough? (laughter) Well you never plan for one player outside of the floating safety like you see in Earl Thomas up in Seattle and the middle linebacker who can cover. I remember when we faced against Lovie's (Smith) Bears we'd see great players but when we put that plan together we only focused on two players, the great Brian Urlacher and their safety Mike Adams. That's not to say their other stars didn't have talent or weren't a big part of the game, but they aren't game altering from a game plan stand point. When it comes down to it, planning for a corner or pass rusher is actually counter productive, by having our lineman or tight ends focus on one or two players as pass rushers it actually creates other opportunities for other players. By shifting your focus to only one aspect you let other opponents make plays. If a tight end is inexperienced and entirely focused on one player and then their blocking assignment changes, they are mentally unprepared and, more often then not, struggle. Same goes for focusing too much on a specific corner, if your signal caller is always looking for that corner instead of the real defensive signal callers, the mike and deep guy, his mind will natural look at that corner. They did a study of eye focus and when a quarterback is told to throw away from a specific corner, they actually kept shifting their gaze towards that player and had less time to go through their other routes and that lead to more mistakes.

On the run game:

While many consider it dead, the iso(late) run is actually still around, it's just changed and if you ask a (offensive) line or running back coach and they will tell you they love the direction it's gone. While originally designed to use a big tail back (full back) to run in front of the main back, he would get past the defensive line and using experience and intelligence to select the defender to block that would boost the back into the open field. It was hugely successful until the need for another receiver was needed with the rise of the so called spread offense, a one tool player wasn't nearly as useful and while some teams still use those pure blocking full backs, and many use them successfully, many teams have moved away from them. But if you ask a coach, they'll tell you that the iso run is still a key part of any offense that values a run game, it just isn't obvious to those who only watch football instead of game planning it. The real change was that instead of a one tool full back it's shifted to tight ends and H-backs who can block and receiver, the full back isn't dead, it's just merged with the receiving tight end. If you talk to the tight end and line coaches of the teams with the most running success they all use their tight end as an iso blocker. Doesn't matter what scheme they run for blocking, even zone blocking. This only works with smart tight ends, if they can't properly identify who to block, they can make it worse, but the iso blocking scheme is still alive and well, don't be afraid to study to see if it would work with your team, discuss it with your coaches. Especially if you have two quality tight ends, this leads to an extremely flexible system that is potent as both run and pass formation.

On how to consistently coach running success:

I only really want one thing from my backs, vision or intelligence. They are really the same, but knowing prior to the snap where defenders will come from and then once the play gets going knowing who to follow or the method by which to avoid defenders is the first key to success. That is what separates long term success from a flash in the pan, a back comes into his own when he can do this. Now there are obviously other factors, like if the line can stop the back from getting hit before he hits his goal (line of scrimmage).

I'm glad coach (Andy) Reid brought up the changes, so they are called, to the isolated, man blocking we are seeing with tight ends and full backs. I've worked closely with both positions in terms of blocking formations and planning and I can say that I personally love (laughter) having a tight end who can lineup anywhere and can even act as a full back. They say a linebacker who can do his three jobs is invaluable, having a tight end who can do it all is just as valuable, at least to me, I'm not sure how well a linebacker can carry the ball (laughter).

On what traits a running back has that lead to success by his team:

Smart passers are a strict bunch and I'm sure any offensive line coach or center will tell you no one is tougher to please than a quarterback (laughter). But having worked around two intelligent signal callers in the past few years (someone in the crowd asks "wait you're not talking Peyton are you?" laughter) and talking to them as purely pocket passers what they look for is two things, intelligence to pass protect and pass catching. One of them pointed out to me that history shows teams with a back who has over 40 catches has quite the incredible record in recent years. You get, or coach, a back who can catch the ball, you'll have a happy passer, your back drops the ball, they won't be likely to trust that man again unless the coaches tell him to (laughter). Same goes for pass blocking, I can tell you I've never seen either of these guys, both fairly mild in temperament, get as mad as they do when a back misses a blocking assignment.

Each year when I have put together my defense prior to camp, the first question I ask myself and the other coaches is "who is going to be our deep safety." I loved the term Andy (Reid) just used, "floater" since it really shows the changing role of the safety position. Just a decade ago the two deep zone was fading away, with a lot of Cover 1 and 3, using the other safety, the strong one (laughter), in a shallow zone or as an occasional pass rusher. But what we've seen the past two years is the return of these two deep zones with more two free safeties that would make Tony (Dungy) and Lovie (Smith) salivate (laughter). Looking forward you should expect most teams to run with a deep, high safety if they have the talent, if they don't, expect the return of more two deep zones since it helps compensate if you are one of the majority of teams that don't have those safeties that can cover the entire deep field.

So at last years draft we logical defensive minds (laughter) got together and we made a list of what positions we'd take first if we were building a defense from scratch. Now not to brag but I will say my rankings look pretty close to the final standings but I don't have the whole thing on me but I'll give you a quick breakdown, it was more complex but here's the basics. Firstly they would take a linebacker who could play every down and was able do be that guy who can lead the defense and can play the three phases of defense (run, pass, pass rush). Secondly came free safety, now I'd switch those but moving on (laughter). Next came a tie between corner and a linchpin (defensive) tackle, I know, ties suck, ask Andy (laughter, in reference to a tie he had in 2008 when both teams forgot ties existed in the regular season) but we aren't a vast group. Lastly came an edge rusher, which may surprise young coaches, but the longer you are with the game you'll see and edge rusher is nice but it's possible the easiest position to defend against, don't tell my pass rushers this though (laughter).

On why changes to the linebacker position isn't smart:

First I'd like to thank the Jags for my new promotion as well as coaches (Lovie) Smith and (Mike) Martz for my previous coaching chances, I can say linebackers (his old coaching job) are just nice guys, but those defensive tackles, I'm sometimes a tad afraid to correct them (laughter). Secondly I want to talk about some vernacular changing from the high school levels, through the NCAA up to our wonderful establishment. I'd like to begin by talking about the changes at the college levels where coaches aren't teaching coverage skills to the linebackers as often. Far to commonly they come into the NFL and we get them into camp and start coaching the basics for rookies and they don't even know the foundation of how to shadow a man or back step into a zone while watching the passer. This is why so often teams shift these potential, from a mental and physical standpoint, mike backs outside as pass rushers instead of maximizing them. So my plea to you coaches, don't waste talent, teach your backers to cover, a every down back is the most valuable position on defense, maybe even offense, regardless of what my esteemed fellow coaches have said (laughter).