Some Clarification is in Order: The Offensive Line and the Run Game

When people analyze the effectiveness of a team's run game, most know each teams offensive line has a role in the potency of said running attack but we too often overlook them or just focus on the running backs themselves. Today I want look at the what coaches expect of their offensive lines.

Share All sharing options for: Some Clarification is in Order: The Offensive Line and the Run Game

From high school up through the NFL (or any professional football league for that matter) the goals of the offensive line remains clear and simple. These coaches expectations for offensive lines are uniform and focus on two goals:

Goal #1: Ensure the back makes it to the line of scrimmage

This is the most primitive of goals for the line, if the back gets hit prior to returning to the line of scrimmage, by in large, this is the fault of the lineman and constitutes a hugely negative play. Now obviously a back who is indecisive can cause this to happen as well but over the past five years these types of situations make up less than 7% or runs for less than a yard. So let's move on from that side not and take a look at an example of poor blocking causing a run for no gain from the Super Bowl. 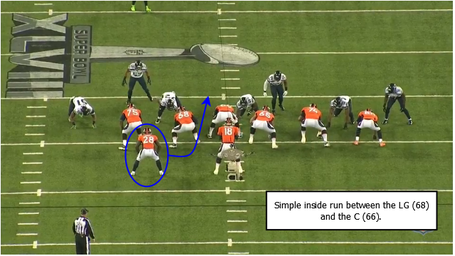 This is a base run play, Broncos have an even match up in numbers as the Seahawks plan on dropping their Will (left most) linebacker into coverage, watching Peyton Manning for play action. 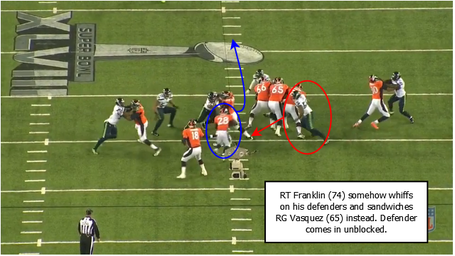 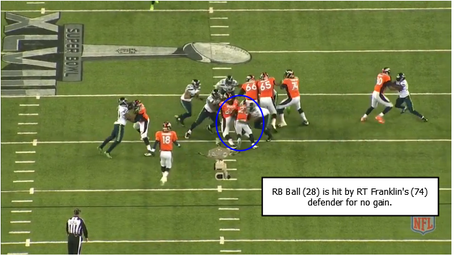 The play ends before running back Montee Ball can hit the intended gap formed by right guard Zane Beadles, who is getting pushed back, and center Manny Ramirez, who has also lost his defender.

Result: Quite simply this play was a break down by the offensive line, the defense didn't do anything special, it was just poor execution by the offense. While we often don't think about it or notice it when it happens, any team that struggles to get their running backs to the line of scrimmage, it should then not surprise fans when that running game struggles.

Goal #2: Get one blocker into the second level

When designing a run play, the coordinator has to plan how to get a blocker (usually a lineman but can also be a blocking tight end) up into the linebackers. In 2013 all runs of 10 yards or longer had 71% had an offensive lineman meeting a linebacker or defensive back that wasn't lined up within 3 yards of the line of scrimmage. What this means is to succeed regularly running the ball you'll need your lineman to engage linebackers or defensive backs.

Another huge factor of this is the pull game. A quick defenition of this is when you take a lineman and have him leave his starting spot once the play starts and move to another spot to block. Most often this is a guard who pulls to the running side but there are a variety of other styles.The topic of the guard pull is worth a whole post, which may happen in the future, but for now I'll keep it simple, over 76% of runs longer than 15 yards were a guard pull and 83% of runs longer than 20 yards were guard pulls. Teams that routinely generate long runs have superb pulling guards.

Moving onto an example, let's examine a play from week 12 against the New England Patriots. 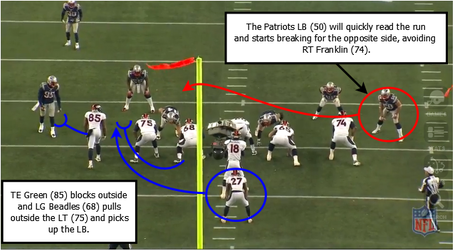 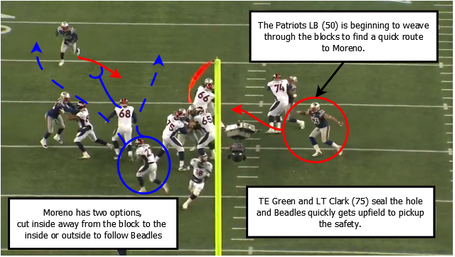 Moreno has two options once the play begins, cut outside of LG Zane Beadles and trust WR Andre Caldwell to block his corner or head inside. 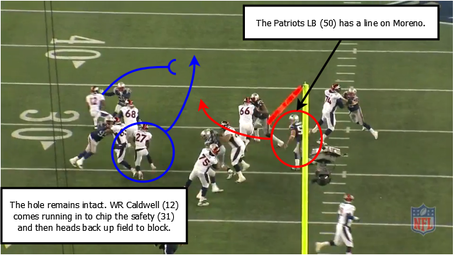 Moreno decides to go inside, following Beadles and Caldwell. 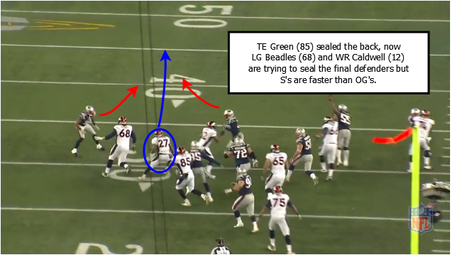 Unfortunately Caldwell takes a bad angle and Beadles isn't fast enough to catch the corner who out runs him. 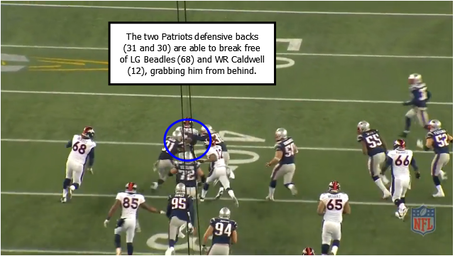 Result: A very successful, though not perfectly effected, run for a 15 yard gain. The big thing to take away from this is on the vast majority of long runs, the coaches design a numbers mis-match and allow a lineman or blocking tight end to get a one on one with a linebacker or defensive back.

Do the Broncos meet these goals?

Despite the Broncos fielding a fairly successful run game (two backs with over 4.3 yards per carry) in 2013 the Broncos ranked near the bottom of the NFL when it came to this area. The Broncos allowed their running backs to get hit at or behind the line of scrimmage the 8th most in the league, with the Broncos backs getting hit (hit isn't the same as being tackled, keep that in mind) due to missed blocks or bad blocking on just over 20% of their runs (depending on the source, I averaged my own data with ESPN and Football Outsiders). This shows the true production done by Knowshon Moreno and Montee Ball, as well as the Broncos two best run blockers in Louis Vasquez and Zane Beadles. Actually Moreno and Montee both averaged less than 2 and a half yards past the line of scrimmage before being hit, among the worst in the league.

It will be interesting to see if Franklin's trial at left guard works out or if he'll stay at right tackle and how it will impact the run game. I do worry about his fluidity when it comes to the pull or trap game, but from a power stand point, he should be fine, but he could struggle quite a bit on that key part of the Broncos run game. The Broncos are losing one of their best run blockers in Beadles, and runner in Moreno, but the return of left tackle Ryan Clady and the hopeful upgrade at center will see these numbers improve. The Broncos run game out performed their expected yards per carry (based on how often and how early backs are hit) by .48 yards per carry, that's nearly half a yard more per carry than they should have gotten. If the Broncos expect to maintain their solid 2013 production without Moreno and Beadles, Clady will need to return to full health and Montee will need to fill that void.

A lot of "if's" going forward, but there is potential to improve, and it's found in the basics of run blocking.