Both the Broncos star quarterback and newly signed star defensive end spoke to the media yesterday. There was also some funny goings on yesterday that was worth covering this morning that I'll go into later in this post.

Peyton Manning met with the media yesterday at Dove Valley after the first day of the offseason program for the 2014 season. It's always good to hear from the quarterback of your team, even if he rarely provides any real insight into the goings on with the team.

He is explosive. You can’t hold the ball very long when he is running a route -Peyton Manning on Emmanuel Sanders

Oddly, DenverBroncos.com cut out some comments about Mike Adams from the press release that some of us found strange. Perhaps the Broncos PR Department doesn't want Mike Adams and Aqib Talib working with Jack Del Rio on chemistry because one of those two players won't be needing to develop chemistry with the Broncos in 2014. Or perhaps they just missed the quote.

Other than that, Manning did say a few things that caught my eye. The first thing I always look for is a status on his health, which he had this to say.

I feel pretty good, I do. It’s always nice when you get a clean bill of health in your physicals. Plural—I have to take a couple of them each offseason, but it is nice when they say you are cleared to play and when you feel good about what is going on in the weight room...

The other tidbit that excited me greatly was his comments on freshly signed Bronco, Emmanuel Sanders.

He is explosive. You can’t hold the ball very long when he is running a route, I learned that. He is excited about being here. Obviously, it is fun to play with guys who are excited about being here with the Denver Broncos. In the studies that I kind of did on him, I saw that he led their team in tackles on kickoff team one year. That tells you the guy likes football. That is more than just being a receiver; that is being a football player. I know he’s eager to learn. I know he was excited to get started today where he is allowed to meet with the coaches and learn the offense. I look forward to playing with a guy like that. I think he’ll be a really nice addition to our football team.

You can’t double-team both of us, especially with the big guys in the middle. -DeMarcus Ware on playing opposite Von Miller

DeMarcus Ware also met with the media yesterday and said some things that should really pump up the fan base for what this defense might be capable of doing in 2014.

Two things again really suck out for me. The first was how a team focuses on a championship. If you look at other world champions, it does come down to the little things he describes.

Everything is all about details when it comes to football. When you have everything in place, it really doesn’t matter. It comes to the small things of guys really wanting it, the mistakes that you make and it starts this offseason with just working out and guys really giving it their all. That carries over into the season.

However, even more impressive was how he described his excitement to play opposite of Von Miller along the defensive line. For the first time since Elvis Dumervil was wearing orange and blue, the Denver Broncos may have their orange crush defense back for that final push for a Super Bowl championship. Ware had this to say.

I’m excited about it. Playing defensive end, you always get a lot of the grunt work, especially when it comes to pass rush and getting double-teamed. But if he comes back where he needs to be, you can’t double-team both of us, especially with the big guys in the middle. Those guys are going to be holding it down, getting the pressure in the middle of the pocket. We’re just really ready to play. I’m looking forward to just playing with all the guys and just keep it rolling.

Are you ready for it, Broncos Country? I know I am!

Look at the first guy on the list. Ha. Ha. Of course, Mike is helped by the fact that Chris Harris Jr. also got duped, along with several other Mile High Report staffers and the Denver Broncos own Andrew Mason. Doh! 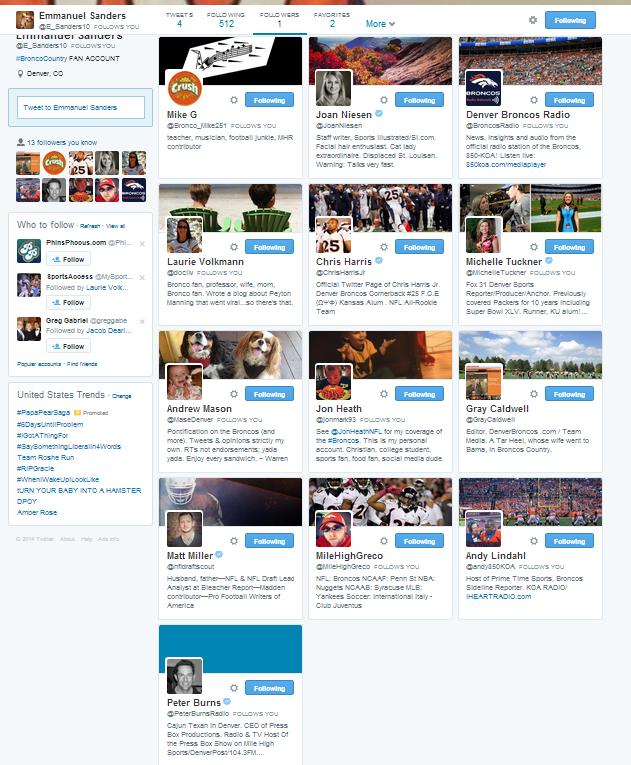