Good Morning folks! I recently stumbled onto the draft simulator from fanspeak.com. It's a pretty awesome tool that simulates a draft. You choose how many rounds, you choose from four big boards (I used fanspeak and walterfootball), you choose the team.

Share All sharing options for: 2014 NFL Draft: A six pack of mocks

For my own purposes, I wanted to do three drafts where I was using my best judgement to select players, and three drafts where I went strictly by BPA.  The best judgement drafts were 5 rounds, and the BPA drafts were a full 7 rounds.  When I went strictly by BPA I took the highest rated player left on the big board.  There were some exceptions, I didn't double dip at QB or RB, and at one point  I think a FB was the top rated player--I didn't choose him.  There were some interesting results so let's get to it!

Overall I was happy with this draft.  Shazier was a no-brainer as only a couple of corners were there (Fuller).  I felt I could grab those guys later though and took the playmaking LB.  I was really happy to take Brooks in the 2nd round because I think we might need some more safety help with the uncertainty of Rahim Moore.  Behind Moore we have special teamer David Bruton and then some guys on futures contracts.  In rounds 3 and 4 I was able to take care of some needs with some solid players, and in round 5 I rolled the dice on a boom or bust quarterback. 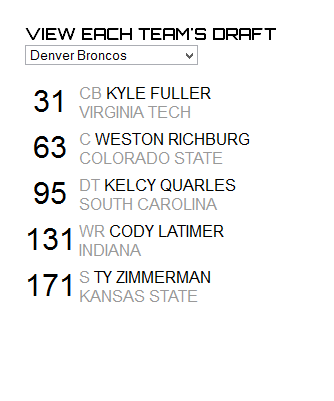 As you can see, this draft fell a lot differently.  But I was able to address the holes we had left on our roster with the exception of LB. 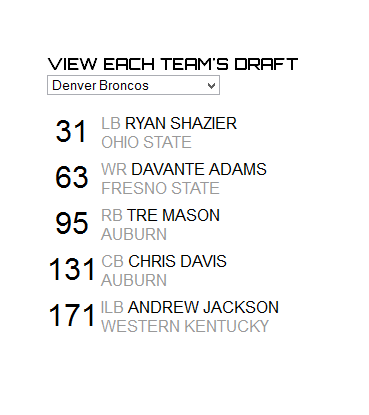 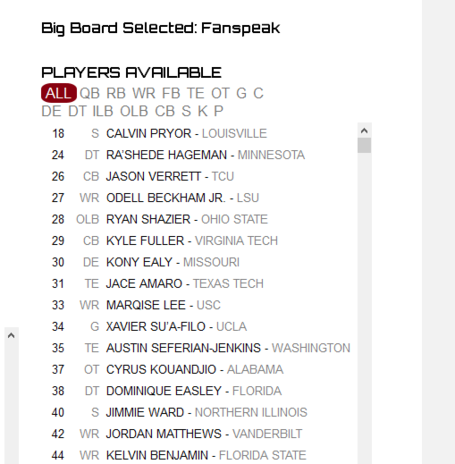 Moving onto the BPA draft and there is quite a bit of difference as we will see: 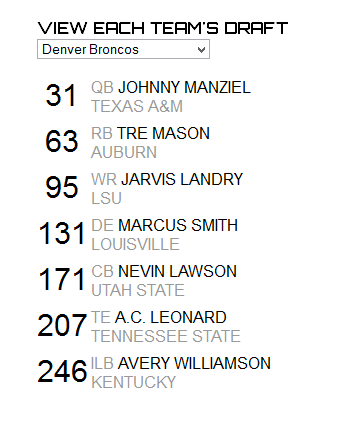 I'm sure if the draft went this way many in Broncos Country would be outraged.  Brace yourselves though, using different boards, Johnny Football was consistently there at #31.  Could potentially set up a trade scenario if Elway won't pull the trigger.  In the end, a lot of needs end up getting filled, but the top half of the draft is very offense heavy which is probably the opposite of what folks are thinking. 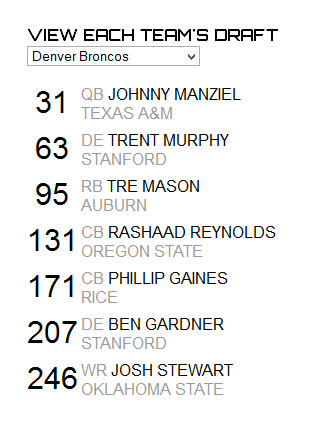 This draft probably underwhelmed me the most.  Besides grabbing some help to the secondary in rounds four or five, I felt pretty meh about it. 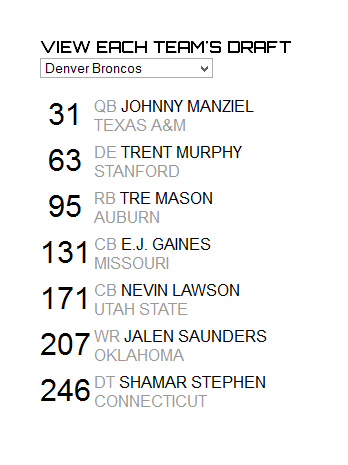 The first three rounds set up exactly as the last mock draft.  I double dipped at corner again.

All in all, it was an interesting experience.  I definitely started to see patters as to what players would be there at specific picks.  However there was enough variance to keep you on your toes.  Bridgewater went #1 a couple times with Clowney sliding to the Raiders.  Other times Mack want #1, and there was a huge run on QB's early.  I suppose the greatest lesson you can take away from doing these is that the draft is a breathing organism that will take shape in time.  All it takes is some variance on what teams do as opposed to what you think they will do in order to change your plans and strategy.