The Broncos turned the ball over 26 times in 2013. The Broncos forced 26 turnovers. How does that compare to the league average? We break it down in this two-part series.

Share All sharing options for: Broncos turnovers and NFL trends: An analysis

Today let's look at turnovers, one of the most - if not the most - critical statistics in all of professional football. It may surprise you, but even as offenses become more and more pass-friendly, they are getting better and better at securing the football. There are three main points I will be making in this, Part One of our look at turnovers:

The 2013 Broncos turned the ball over 26 times while forcing 26 turnovers. The average NFL team in 2013 turned the ball over 25.4 times, so the Broncos were completely average in terms of turning the ball over. The Giants were the worst team in the league last season with 44 turnovers while the Colts were the best with only 14. Seattle led the league in forcing TOs at 39. Their 39 forced TOs were 51% above league average. This is interesting because there were years in the NFL when the average team had more than 39 TOs. So let's look at TOs in the NFL over time with the average number per team for a full season and the average number per team per game (click on the chart for a larger version). 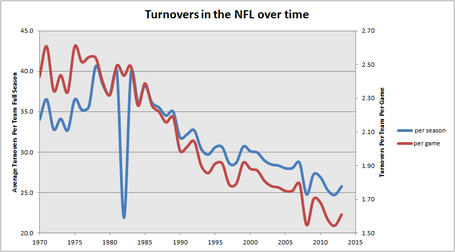 In 1978 the league increased the regular season to 16 games. The 1982 strike shortened the regular season to 9 games. Notice that over time the total number of TOs per team has dropped dramatically - the high was 40.8 in 1978, more than the league leading 39 TOs forced this year. The average NFL team in 1983 turned the ball over 39.8 times. The 1983 Skins forced 61 turnovers. Relative to the league average the Skins were 53% above average, slightly better than the 2013 Seahawks. The 1983 Giants were the worst team in the league at turning the ball over, coughing the ball up 58 times. The 1978 49ers turned the ball over an NFL record 63 times. The 2010 Pats and 2011 49ers conversely set the league mark for fewest TOs with 10. So on the whole, turnovers are happening less frequently.

What is driving this steady drop in turnovers? IMO, two things: better QB play and better ball security. If you go back to 1971 almost 6% of all passes were intercepted. The league interception rate has been dropping steadily since then. In 2013 only 2.4% of all passes were picked off. This was the lowest league-wide interception rate in the history of the NFL. QBs used to be allowed to throw more INTs - it was an accepted risk of throwing the ball. That has changed completely to the point where even a few interceptions can derail or destroy a young QB's career. To better illustrate this point lets look at two of the QBs who made the Pro-bowl in 1983: Dan Fouts threw 20 TD and 15 INTs that season; Bill Kenney threw 24 TDs and 18 INTs. Those ratios were good enough for the Pro-bowl. Of the 28 teams in the league, 15 had a starting QB that threw more INTs than TDs that year. This year there were only 6 teams with primary starting QBs who threw more INTs than TDs (Eli, Flacco, Geno Smith, Henne, Scaub and Pryor). 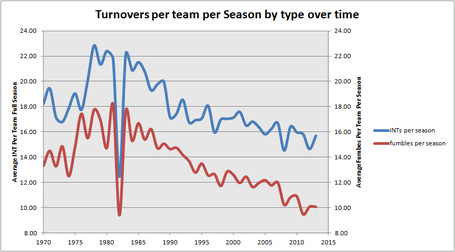 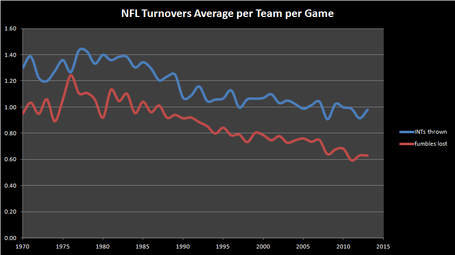 So the average NFL team is turning the ball over less and less as time goes on. How have the Broncos specifically done over time? Going back to 1995 you can see how the Broncos have compared to the NFL average in terms of giveaways. We have consistently been slightly above average with the occasional year of being a little below average. 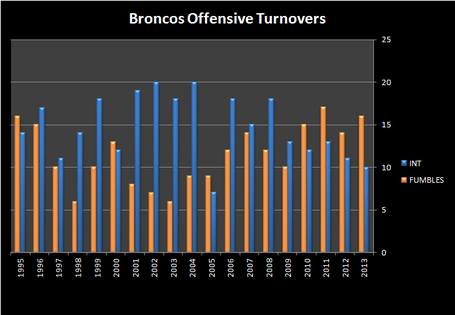 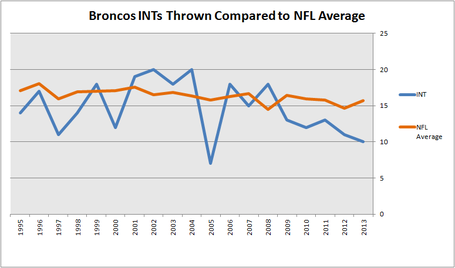 If you start at 2003, there is a very disturbing trend line for fumbles lost by the Broncos (the blue bars below). One an absolute number basis, the Broncos only lost 6 fumbles in 2003 (second best in the league) and lost 16 in 2013 (worst in the league). FWIW the 2002 Chiefs set the NFL record by losing only two fumbles during the entire season. The 1959 Chicago Cardinals set the league record (in 14 games) by losing 36 fumbles. 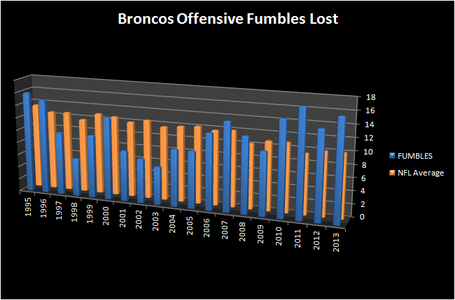 How can the Broncos get better at holding onto the ball?

This is a good question without a good answer, unfortunately, but I'll give it a shot. First let's talk about the two types of fumbles. The first type of fumble is one that is almost unpreventable. That is the fumble where the defender does something specifically to separate the ball from the offensive player (like putting his helmet on the ball during the tackle). The helmet on the ball fumbles might be less frequent with the new supposed emphasis on player brain safety (vigorous enforcement of the spearing rule), but that will remain to be seen. Defenses that are coached to punch at the ball in the hopes of creating a fumble EVEN if it means giving up more yards (or missing the tackle) will still create more fumbles than teams which focus more on the tackle and less on stripping the ball. The Seahawks are a team that will give up a few extra yards in the hopes of forcing a fumble. The Broncos under JDR have been much more about making the sure tackle. It has been rare in the last three years to see Broncos defenders going for the strip after the first defender has stood the ball carrier up. The second type of fumble is the fumble that occurs when a player does not properly secure the ball (three points of contact). Coaching should be able to be stop these fumbles. Getting rid of the players who consistently DON'T practice safe ball-handling also should end (or curtail these fumbles) - insert joke here about "safe ball handling". So who are our fumblers? Who has fumbled the most for the Broncos over the past 4 season (all fumbles shown - not just those recovered by the opposing D)? See below - I left out the players who only fumbled once for the Broncos over the 4 seasons - everyone else is getting called out.

I have highlighted the guys who will be playing for the Broncos next season. As you can see, the only player who might be expendable here is Hillman. To suggest that we get rid of any of the other 3 because of fumble problems is ridiculous. It also bears pointing out that Manning had 11 of those 13 fumbles in 2013 after only fumbling twice in 2012. You can see what a difference Ryan Clady makes in that number alone. You can also see the main reason why the Broncos parted ways with Holliday. Over these 4 seasons the Broncos have lost 62 fumbles. The players listed above fumbled 92 total times. Overall the Broncos offense put it on the ground 115 times. So those players listed above are responsible for 80% of the Broncos fumbles over the past 4 seasons. Lady luck has also not been kind to us here. League-wide 50% of fumbles are recovered by the opposing D. The Broncos offense have only recovered their fumbles 46% of the time over the past 4 seasons. So we are slightly below average in terms of the luck factor.

For those of you who like tables more than charts, here are the turnover numbers for the Broncos (O and D) going back to 1995

This is where I will end part one. In part two we'll look more closely at takeaways and where the Broncos have been in recent history on that side of the ball. We'll also look at some other teams that have dramatically improved in terms of takeaways and see if we can learn anything from them.