Broncos players and Miles the Mascot will be hitting 20 cities in six days to honor the best fans in the NFL.

Need something orange and blue to get you through the month of April? The second annual Mile High Salute to Fans Tour will be hitting the road next week to thank Broncos fans all across Colorado, the Broncos announced. The 2014 tour will start in Fort Collins Monday, April 14, and will conclude in Castle Rock on Saturday, April 19. 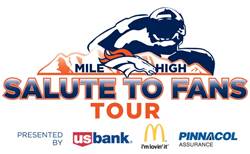 Stopping at three to four cities each day, the tour will visit 20 cities over the six-day trek. Fans can get autographs and photos with Broncos players, cheerleaders and Miles the Mascot. Each tour stop will be free and open to the public.

Specific players (and cheerleaders) have yet to be announced.

"We're very excited to bring this tour to each of the 20 cities next month," said Mac Freeman, the Broncos' senior vice president of business development. "Spending time in the communities that support us so passionately is extremely important to everyone in the Broncos organization."

If you went to one of these tour stops last year during the first annual run, let us know your thoughts in the comments!