Remember this is a preliminary order based primarily on the end of 2013. I've added all 2014 draft picks and UDFA's and projected their spots on the roster. What has changed is that I have also color coded each player. The codes are described in the snips.

Share All sharing options for: Broncos depth chart, updated after the 2014 draft 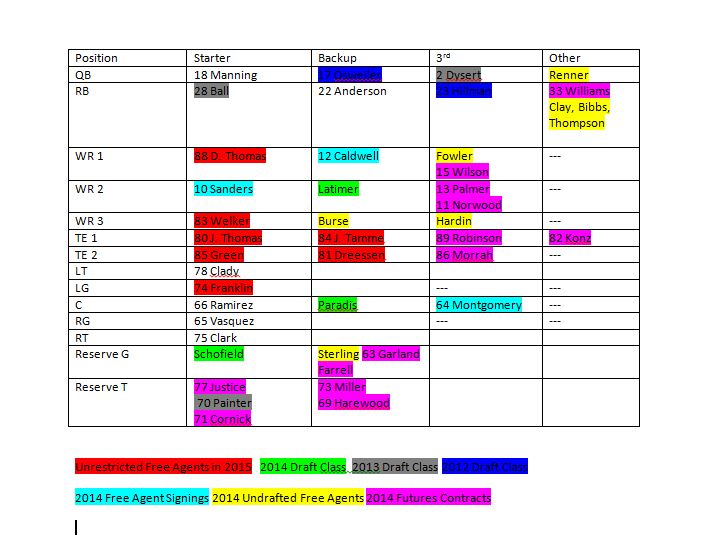 There is now a bonafide cluster, uh, mess along the OL at the positions of contention.  There are a lot of tackles and a lot of G/T players.  There can end up being three new starters along the offensive line in 2014.  LG, C, and RT are all in play.  The coaching staff will look to find the best combinations possible and barring injury, should be able to field a starting five better than last season's.

As far as WR, locks are DT, Welker, Sanders, and Latimer.  Though Bubba Caldwell was resigned and should be the safest reserve with the ability to play inside and outside (not to mention familiarity in the system), someone might surprise and unseat him for that final spot. The plus that I see is that the OL is everybit as deep with talent and versatile as the defensive line.

As far as TE?  Your guess is as good as mine.  I've long contended one of Dreessen/Tamme will be released but that remains to be seen. 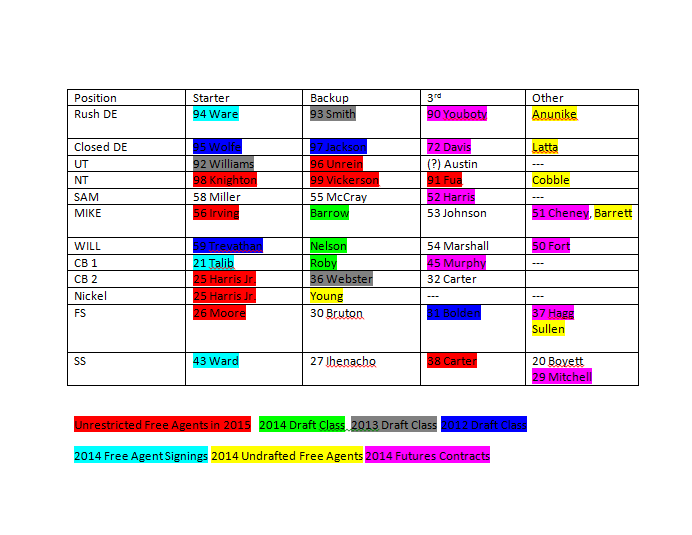 I was surprised the Broncos didn't draft a safety, though they did shore up their depth with the selection of Bradley Roby at corner.  He and Kayvon Webster should battle it out for the #3 spot with both players relatively safe from the bubble.  It is Tony Carter vs. the rest in that fight for the final CB spot. With safety, I hope Rahim Moore is healthy and can play at the same level because the depth there is very thin.

The best competitions all summer will be at the reserve rush end spot as well as the backup-LB positions.  There are so many bodies and so many players that can play multiple positions that the action should be hot and heavy.  I've already developed an eye for UFA Barrett from CSU and will be doing a write up on him shortly.

Remember to take the order with a grain of salt.  Each player will earn their place on the roster as we go through Training Camp.  It really does say something about the depth on this team when talented players like Roby and Latimer will find playing time in reserve roles for the time being.