How long does the average draft pick stick around?

Share All sharing options for: How long does the average draft pick stick around?

When a team drafts a player there are varying expectations but while the expectations of on the field play may vary, all fans hope those players will stick around longer rather than shorter. Last year Bronco fans saw Elway draft a young wide receiver by the name of Tavarres King and then saw him cut before the season even started. Many didn't mind saying 5th round picks rarely make the teams active roster that  this but others were surprised, while King was not a early round pick, they felt a 5th round pick should still make the roster. So I wanted to know, what percentage of players from each round are on the team after X years.

A look at the newest Denver Broncos.

Along with the new draftees the Broncos add 15 players that went undrafted.

To do this I decided to go back over a decade and looked at each and every draft pick and tracked whether they were with their team each year for up to five years. I took all this data and created a complete table where I was able to see what percentage of players were on the teams that drafted them at the start of their 1st, 2nd, 3rd, 4th and 5th years. By creating this table we are able to get an idea of how long we can expect a given player to stay with the team that drafted them on average.

The biggest caveat some may have with this is that they feel it doesn't take into account how talented and deep their team is but with a population of 32 picks (on average) for each round over 15 years there is more than enough samples to account for team record and talent.

Thanks to Joe Mahoney for creating this visual chart. 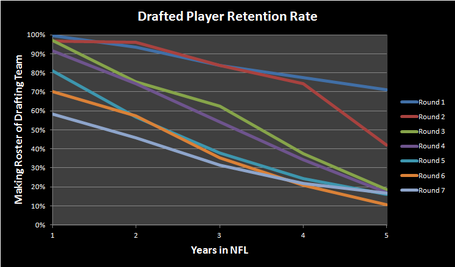 So How Have Elway's Picks Stood Up?

While five years haven't passed since Elway took over control of Broncos player management, we can still get an idea how his picks have stuck around compared to the data set over the first three seasons. Right away King being cut before he made it to his first game was not actually common, rather it is the exception. But having said that, let's look at Elway's picks. Now this isn't a measurement of play on the field remember, only if they made the active roster. For the first three rounds Elway's picks have all made the team every year, so it's 100% for those rounds, but once we get to the lower rounds things don't look quite as nice. For round four Elway's picks only made the roster their first year 75% of the time with offensive lineman Philip Blake never making the team (and is now with a different team). In the 5th round Elway say another player fall the first year with the aforementioned King not making the roster. In the 6th it gets worse with only one pick making the team his first year (Danny Trevathan). In the 7th round Elway does improve on the average with 2 of his 3 picks making the roster their first year with only Jeremy Beal not joining Virgil Green and Zac Dysert.

Obviously this isn't meant to be a perfect comparison since Elway is only entering his 4th season and his population size of draft picks is also smaller, but we can still draw an idea of what to expect going forward. So remember while expectations for on the field production may vary, there is a historical precedent for how long we should expect the Broncos draftees to stick around.