I've been on a bit of a hiatus from Mile High Report, and not because I don't want to be writing, but rather because my day-job has had me working 60-hour week after 60-hour week. The one thing that I've been able to keep up with consistently is Twitter, due to the fact that I have long truck-rides from job site to job site (and reading 140 characters is easier than penning 1200-word blog posts).

There are numerous Broncos players who are active on the social media site; these players' timelines give a deeper look into their lives that their play on the field does not show. With the off-season lull in the NFL world coming into full swing, here is a list of the top ten Broncos players to follow on social media in order to keep yourself sane during the boring period that leads up to training camp.

The 25-year old cornerback/safety is a self-proclaimed foodie, and his timeline often includes the foods that he's eating, or would like to try. Omar also likes to keep followers updated on what he's listening to, as well as the song lyrics on his mind at any given time. Bolden interacts often with teammates, Terrance Knighton, Danny Trevathan, and Kayvon Webster, all young members of the Broncos defense. Bolden's best recent tweet comes from a conversation between him and Trevathan, in which he implies that linebacker Nate Irving has a car-wash in his garage. Very cool, if true. 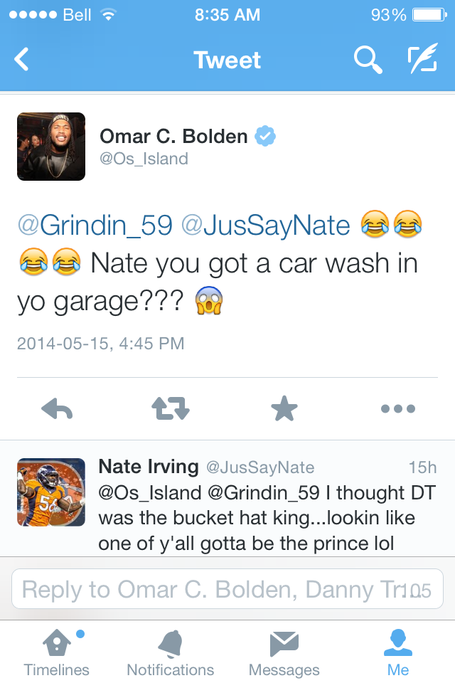 Von's tweets and photos tend to show support for his alma mater, Texas A&M, including pictures during last off-season of his new chicken farm. Miller also uses Twitter to promote his biggest endorser, Adidas with tweets of new gear that he's received from them. Miller's best recent tweet came from the 2014 NFL Draft, where true-to-form, he gave a shout-out to the rising Aggie stars.

The Broncos Pro-Bowl wide-out can be found on Twitter @DemaryiusT, where he gives a daily morning shout-out to God for giving him another day, amid various other tweets about his workout habits, his music playlists, and re-tweets of pictures of himself that fans have edited. Recently, Thomas took to Twitter to announce that he had beat both Ronnie Hillman and T.J. Ward in the basketball video game, NBA 2K14. Thomas' best couple tweets of late though, were a RT of Mile High Report's throwback Thursday picture of him from the 2010 draft, and another that indicates he took some flack from fans for using #BroncosNation instead of #BroncosCountry. Can't we all just get along, people? 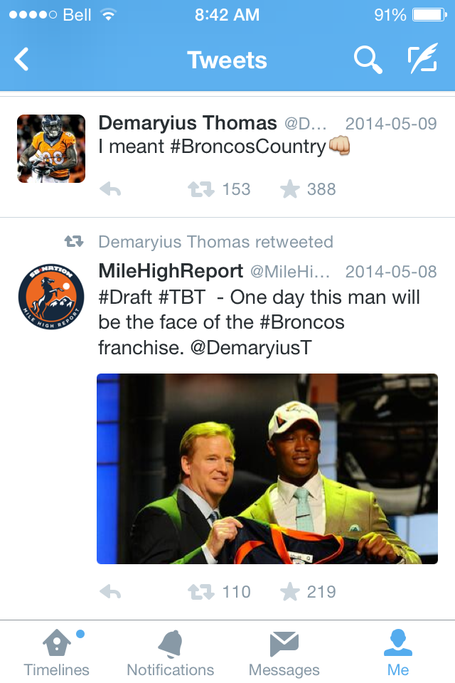 Danny Trevathan uses Twitter to motivate his followers, with inspirational quotes and thoughts from himself. Trevathan also interacts with Knighton, Webster, and Bolden often, and was part of a Twitter rant by the four of them, which griped about the struggles of pro athletes who want to express themselves without getting into trouble with their teams, agents, or fans. Trevathan's top tweet of late goes to his "welcome to the Broncos" tweet to fifth-round pick, LB Lamin Barrow. The two so-called "dread-heads" or "Lionbackers" will push each other to succeed in 2014.

One of the Broncos' newest acquisitions ranks seventh on the list, primarily for his great Twitter bio. Ward's tweets are entertaining, and definitely give a shot of the Pro Bowl safety's life off the field, but his bio is what gives him a place on this list: "Bay Area raised me... Denver Pays me! Safety for the Denver Broncos. Best Safety in the league doe!" Ward is most definitely in the conversation for best safety in the league, and his chemistry (at least from the outside eye) with the rest of the Broncos defense is a great sign for the upcoming season. #MileHighMob was the hashtag that Ward used when announcing his jersey number for the season. I'm not sure whether that slogan has been used before, but I like the sounds of it; it gives off an aggressive vibe for this season's loaded defense. 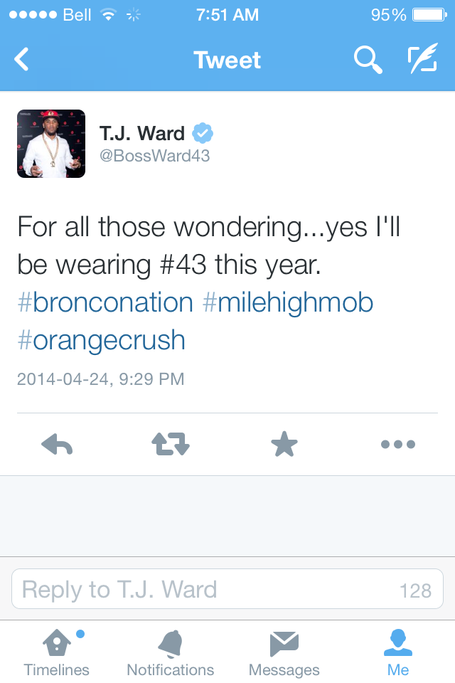 Julius Thomas was a star basketball player in his college days at Portland State, so it's no surprise that his Twitter feed includes a bunch of tweets about basketball. Thomas is one of the Broncos who interacts the most with fans on Twitter, and his Instagram is a good follow as well. Orange Julius' best tweet of late came when he let us know that he's "not very good at much in this world", just dominoes (oh, and that sport called football). 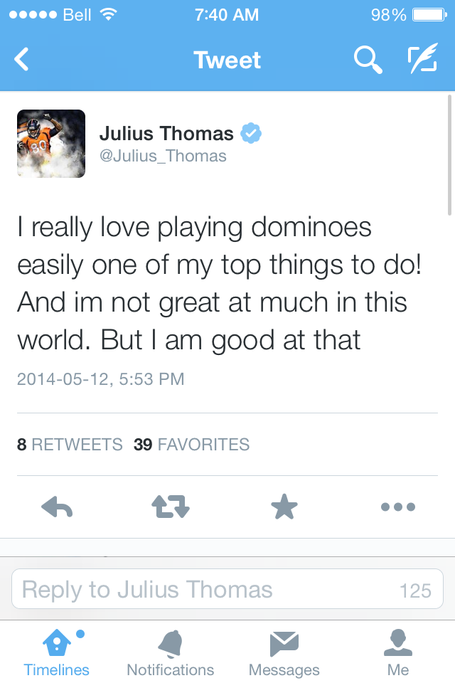 Broncos second-year corner, Kayvon Webster is one of the most active members of the team on Twitter, and he's not afraid to speak his mind on whatever he's thinking about. From song lyrics, to TV shows he's watching, to interacting with the rest of the members of the Broncos defense, Webster is a great follow. Webster's best tweet came this past week, when he announced that his younger brother, Paul, would be trying out for the Broncos at rookie mini-camp (the other posts shown give you an idea of Webster's other tweets). 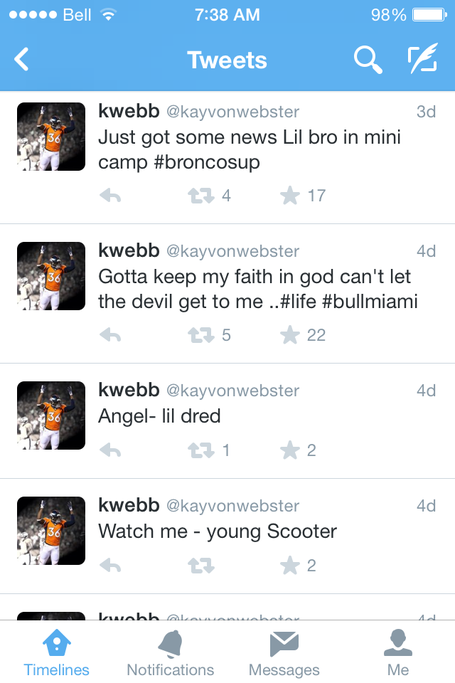 Judging from the things he posts on Twitter, Ball is one of the Broncos most determined players to succeed in the NFL. After assuming the Broncos starting running back position once Knowshon Moreno left for Miami, the second-year back was criticized by Twitter users, saying that he would not be able to fill the void. Ball's response? Awesome.

Chillin takin screenshots of tweets from those doubting me lol.. I'll find your tweets again here in 4months..

Chris Harris' Twitter feed is full of basketball tweets; if you're looking for a Broncos player to follow along with during an NBA game, he's your man. Usually a Lakers fan, Harris has been all over the map in the NBA playoffs, tweeting about practically every game. Like other Broncos, Harris is a big supporter of athletes from his alma mater, supporting fellow Kansas Jayhawks in their pursuit of the NFL. Harris' best tweet of the off-season goes back to free agency, when he found out former Jayhawks teammate Aqib Talib had signed in Denver. 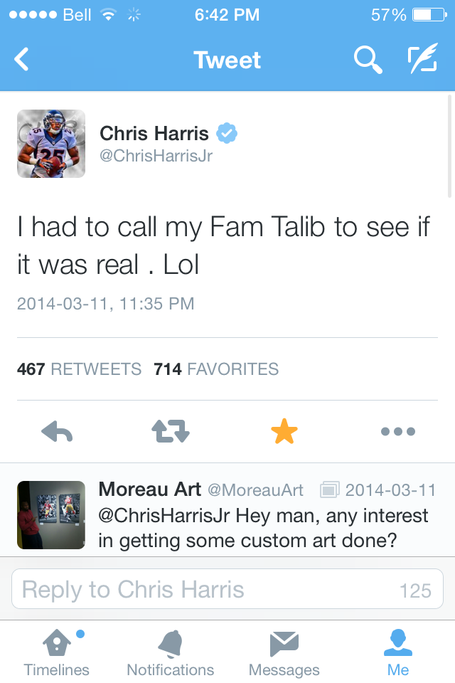 Duke Ihenacho, like Kayvon Webster, is almost always tweeting when he's not playing football. Ihenacho has a better sense of humor than most of the Broncos on Twitter, and is most definitely one of the most authentic follows. Duke had some great tweets following the draft, encouraging UDFAs, saying that they'd take more pride down the road knowing that they were undrafted and made it; however, his best tweet came regarding Broncos OL draft pick, Michael Schofield. 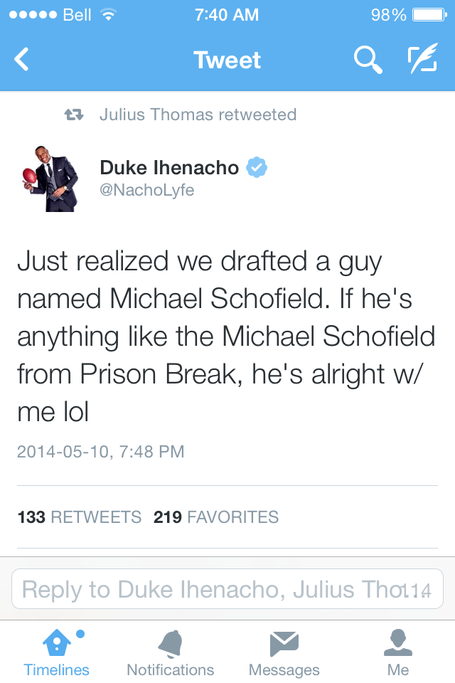 Your Broncos Twitter champion, folks! None other than Pot Roast himself. Knighton is never afraid to speak his mind on social media, and he never fails to include his signature hashtag, #snodaaat. Knighton is quite the basketball player, and as is the trend with the Broncos, he loves tweeting about the NBA, especially his good buddy, MVP Kevin Durant. The Broncos Twitter champ had quite the interesting idea regarding Durant's nemesis, Lebron James, too. 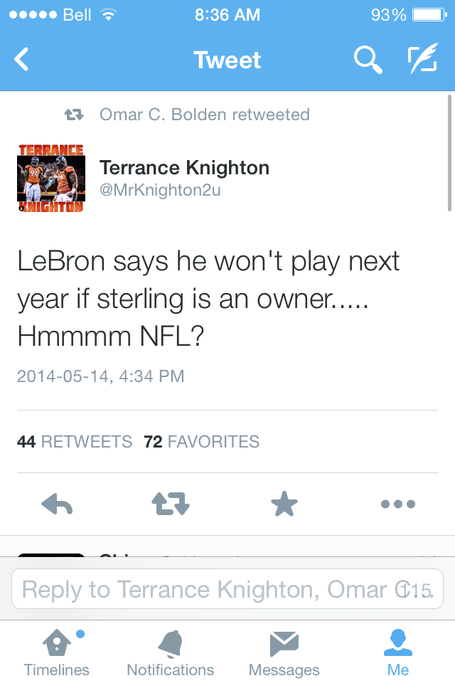 There you have it, folks; your Top 10 Denver Broncos on Twitter. Do you agree with the list, or disagree? Are there any players you follow that should have made the list? Let us know in the comments below!