Peyton Manning's Super Bowl performance has inspired its own app.

A former teammate of Denver Broncos quarterback Peyton Manning has created an iPhone app inspired from Manning's Super Bowl collapse and the wild success of Flappy Bird. The game, called "Smashman," involves trying to score 44 points with one player by avoiding defenders on the screen.

The description of the app reads: "Dare to take on the best defense in the world on your iPhone? Tap your device to make smashman run. Aviod defenders and score points." 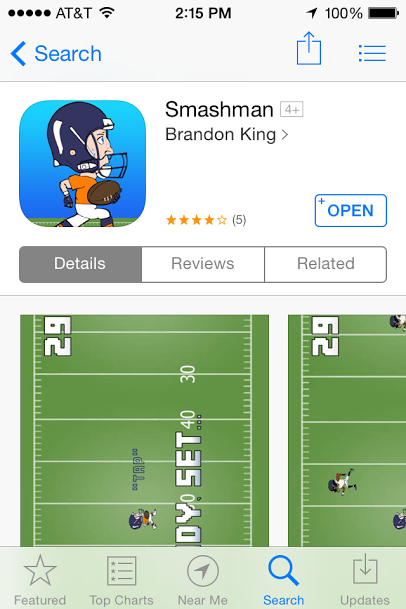 Though inspired by Manning, the Seattle Seahawks defense, and the final score of Super Bowl XLVIII, no NFL logos are used in the game, so the app is safe from copyright claims. The creator of the game, Brandon King, played for the Indianapolis Colts for two seasons, including one with Manning in 2010.

"(The Super Bowl) was the most embarrassing game I ever saw him play. I was like let me make an app where it’s almost impossible to score on a defense," King told TMZ.

Humorously, an audio clip of Peyton yelling "Ohama!" plays every time you run into a defender, which is often. I downloaded the app this morning and played it for several minutes before giving up. My high score was two points.

The goal of the game, scoring 44 points—one more than Seattle scored in the SB 48—is all but impossible.

King said the free app received over 2,000 downloads in the first week. When asked about Manning's feelings, King said Peyton would probably laugh.

"If anyone could laugh at it, it would be him."

The app requires iOS 5 or later and is compatible with iPhones, iPads, and iPod touch.

Update: The app is now also availalbe for Android phones. Thanks to Zach Eckels for pointing that out in the comments.