The topic of playoff expansion is pretty hot right now and has been for a few years and NFL fans are fairly split. A year ago or so I wrote about how expanding the playoffs would not hurt competition by adding two teams per conferences (the #3 and #4 wild card teams would have an average of just under nine wins). I won't discuss this much more since I was pretty thorough in the last article so I'll look at expanding the playoffs in a different way. I would like to elaborate on that theory by adding a new idea which would lead to a few new thoughts for playoff expansion that may be superior to simply adding two teams per conference.

On Sunday May 4th, DeMarcus took part in the "Wings for Life World Run" sponsored by Red Bull right here in Denver.

The paradox of speed in the NFL: wide receivers

Some fans, coaches, owners and teams are obsessed with measured 40-times, but for every player who runs a great 40 at the combine and succeeds there seem to be two who do so and fail in the NFL.

DeMarcus Ware: The Mile High Report Interview The paradox of speed in the NFL: wide receivers

Point 1: Only add one team per conference

The key to this change (down from two per conference) is you eliminate the crowd that says that 50% of the NFL should not get into the playoffs. Another key reason for this is to increase the quality of teams getting in. While adding two teams per conference the average win record was .544, when you only add one per conference that jumps to .577 (or 9.23 wins) over the past three decades. This almost ensures only teams with winning records get in, teams like the 10-6 Arizona Cardinals last season for example. If this change was implemented from 2000 to 2013, only other team with a losing record would have gotten into the playoffs, this isn't like baseball or basketball where by expanding the post-season more losing teams get in regularly.

Point 2: This creates only one bye week for a team per conference

Another important factor is the #1 seed is more valuable now because it's the only team to get the potential benefits. The team with the bye week would face the winner of the weakest bracket. This throws a great potential twist into the mix that I will suggest but is very unlikely to happen. Everything leading up to this is logical and could happen, everything following this is purely speculation and in no wise meant to predict what will happen.

The Twist: The 1st overall seed can choose home field advantage through the entire playoffs OR choose the first round bye

This is where I think the real fun could be had. By forcing the #1 seed to choose home field advantage or chose to have a bye you create a greater value for the #1 seed that didn't exist before. Some teams that have massively more success at home (Seattle, Kansas City and Cincinnati are good examples) would likely choose the home field advantage but other teams who may be more injured or don't have a great home field advantage could choose the bye week. By doing this you form a desirable #1 seed while creating more weight on each option than you currently have now since the option to choose is so important. If I'm the #1 seed in the NFC and the #2 seed in Seattle, there is no way I am giving them home field advantage if I can avoid it. This type of mind games would also be great for fan speculation.

While overall this weakens the #1 seed if they could have both, it makes it more valuable from the stand point of complete control of the playoff picture, and as always the team that takes the bye (considered the #2 seed for home field purposes in this new bracket) if the #1 team chooses the bye week and the #2 seed loses, the #1 seed automatically gets home field advantage back again. It would totally rework the way we view playoff brackets.

So lets take a look at an example created from the 2013 playoffs. Now I reasoned Denver would want the bye week leaving New England with home field while Seattle would take home field advantage giving Carolina the bye week. So here is how the bracket would have looked:

- Quickly before we jump in we have add the one new team per conference, that would be the Pittsburgh Steelers (8-8) in the AFC and the Arizona Cardinals in the NFC (10-6). 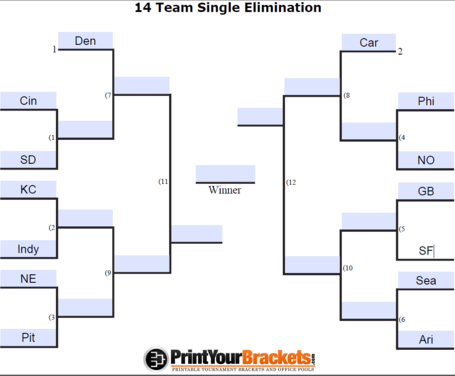 While I didn't include how it would shake out once the games started (especially the later rounds since Denver would have to play New England in New England and while Seattle would have home field they'd still have to play an extra game), I still hope it illustrates what the brackets could look like. Looking at this you can also see other potential options on how to avoid bad match ups against teams you may struggle against. Arizona beat Seattle at home in 2013 so maybe Seattle would rather avoid playing Arizona again and potentially lose home field in the Championship game hoping that an offensive power house like Green Bay or San Francisco's defense could stop the Panthers from getting there and thus give them home field. Similar to Denver, who struggled all season against San Diego, they may want to skip the bye to avoid the Chargers and feast on the weaker Steelers and the winner of the Colts/Chiefs game.

Overall the 7th seed in each division would average just over 9 wins, so it's not hurting competition by adding two new teams per conference, you are still only allowing higher quality teams, plus we forget what a 7-9 Seattle team did to the Super Bowl favorite Saints just a few years ago. The stats are all there, the research has been done, it won't water down the quality of the teams in the playoffs. But I'm mostly using this platform to have a little fun and put out a unique idea. So let me know in the poll which option you'd choose for the Broncos if this was implemented.