A shocking twist in the Glove Gate saga has emerged out of Dove Valley.

In one of the biggest stories coming out of Denver since John Elway received a haircut during his rookie season, new information has been revealed in the Glove Gate saga.

During OTA practice on Wednesday morning, Denver Broncos veteran quarterback Peyton Manning was seen tossing footballs around without a glove on his passing hand—or on his non-passing hand—according to a tweet from the Denver Post's Mike Klis.

Peyton Manning is not wearing a glove on his passing hand

Since arriving in Denver in 2012, Manning has worn a glove—and sometimes two gloves—in both practice and games, but not in every practice and game, records show. There have been conflicting reports on why Peyton wears the gloves, ranging from fear of cold weather to lack of grip in his hands from multiple neck surgeries.

Klis' report from this morning was confirmed by an image tweeted out by BroncosTV's Chris Hall. The photo shows Manning throwing without a glove on either hand: 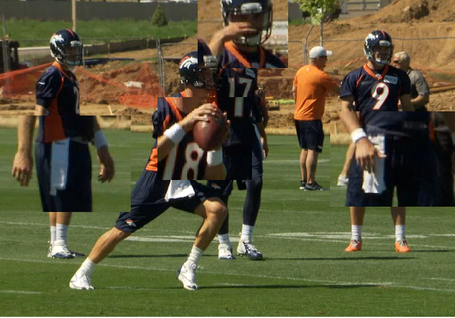 The above image was edited to emphasize that Manning, along with the three other QBs on Denver's roster, did not wear gloves at practice today.

Though Manning was not wearing gloves today, we can confirm that he was wearing socks on both feet.

For knee-jerk reactions to OTAs, stay tuned to Twitter throughout the day. For more Broncos coverage during OTAs, check out our live Day 1 OTA Tracker.

Denver Broncos OTAs: everything you need to know