It is exciting to see some semblance of football happening even if the team isn't getting to put a hat on someone yet. We have new players and fresh rookies to start coaching up. Mile High Report is aflutter with talk about players, roles, potential, and prognostications for our upcoming season. I'd like to take the opportunity and apply a little of what we've seen to a broader look at the team and our attitudes. Has the team changed anything about its attitude on offense or defense? Are we really set up to be a tougher team? My take on it may surprise you compared to the hype machine that OTAs tend to produce.

We finally had the NFL Draft. I've had time to look at the new guys. We've read great articles by the community and staff about how they fit and what they will contribute in the near future. I love it. There's no football happening but yet we get to wet our appetites for it by making some serious divinations on what the future will have in store for our beloved Denver Broncos.

I tend to look closely at the little things first, then work my way back out from there to form opinions on our team. It just makes sense to me especially since I started doing the No Bull reviews a few years back. Here's what player X did and why it worked or didn't.  Based off that it was or wasn't his fault because of the play call / failure of the guy next to him / him not making the right adjustment / not being talented enough to pull it off.  Then that takes you into the realm of why do we have great personnel at position Y while really looking poor at position Z.  Around that time you can start looking at the situation surrounding the personnel decisions and on and on. 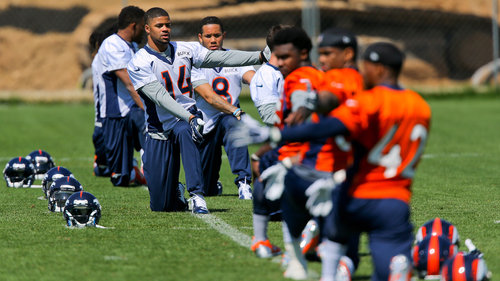 My pondering of our team, given some of the recent information coming out of Dove Valley, led me down one of these rabbit holes to a place I think is worth some thought and discussion by our fan base.  What is our team attitude overall? What is it on defense? What is it on offense? Where does it come from? What can we say about it based off of this years' personnel moves in Free Agency and the Draft?

What is our team attitude overall?

To answer this question you really don't have to go too far back. An organization's attitude comes from the top. If the bottom of the pyramid isn't aligned with the top's attitude then change will happen to one side or the other. This was on full display in recent history with the Denver Broncos.

Let me sum it up in short order: Shannahan mediocrity led to the hire of a guy with huge potential but little experience in Josh McDaniels that was in way over his head and lost the team which led to Pat Bowlen hiring a guy he trusted in John Elway to right the ship who started implementing Pat Bowlen's desire for his team: To build a winning organization who wins championships.

Winning. Championships. That's the team attitude. Our team has been built in accordance with John Elway's best take on what it takes to win. That consists of a great quarterback, a great offense or defense, and a good offense or defense to compliment its counterpart.

We made it to the Super Bowl last year. You'd think a team that good would be good right? Wrong. As has been evident from the moves we've made this offseason, our team is still focused on Winning Championships.  We didn't get it done, so we've made adjustments. Sure the nature of the NFL is that teams mostly have to do that every year, but if you look closely at what we've done, it is apparent that these moves were made in order to improve our chances at next year's Lombardi.

Note: I'm not talking about if we've achieved our goals or are successful or passing judgement on any way on our team. I'm just trying to see what the direction of our team is.

What is our team attitude on defense?

No one last year was going to tell you that Denver was focused on building a dominant defense in order to win a Super Bowl.  If they did, I honestly wouldn't ask them for opinions any longer because they don't have a good take on our team. Denver by way of our signing of Peyton Manning had a great quarterback with a focus of a great offense to work with. The defense is well on the way to having the possibility of being called great, but last year they were clearly built to be "good enough".

Our team has been built in accordance with John Elway's best take on what it takes to win.

I think this year you are seeing a shift in attitude with our Defense. We got exposed in the Superbowl. Our "good" defense wasn't good enough (yes injuries played a huge part, but did you really like the way the team looked in the 2nd half?).  We've added a hard-hitting safety, a premier quaterback hunting defensive end, and the most physical cornerback in the AFC and arguably the NFL. The people they replaced were an ageing veteran safety who didn't scare anyone, a rental OLB/DE who was "good", and a cornerback that by far relied on finesse and athleticism to make plays.

I think all of us can see that this defense on paper looks pretty darn impressive.  I have already stated that I think there's a couple of holes still to fill before we become a "great" defense (free safety, coverage linebacker / MLB). But what I do see here is an attitude change.  If we aren't a top 3 defense like my boy Rodney sees in his crystal ball, we at the very least should be one of the top 3 intimidating defenses in the league.  I'd say that even if we lost DeMarcus Ware or Aqib Talib to injury (heaven forbid).  It is because from the little we've seen of 2014, the Denver Broncos have changed their defensive attitude.

What is our team attitude on offense?

Here's where I run into some disappointing assessments of our attitude that make me look forward to the preseason with hopes of seeing something different. Our team attitude on offense is that we are going to have the best offense in the NFL at moving the ball and scoring touchdowns using a precision passing attack directed by the NFL's greatest QB playing the game today.

If you just read that last sentence that sounds pretty darn good, right? Here's where Sadaraine starts to question the front office a bit. Passing for lots of yards and TDs works pretty well in the regular season. What happens when a game goes sideways on you though which is likely to happen when you face stiffer defenses in the post season? We should all know the answer to that though we may hate it: 43 - 8 happens.

We've improved our #2 WR position with Emmanuel Sanders which I think will add to our record setting numbers from last year. Manning is still here.  So is Wes Welker, Demaryius Thomas, and Julius Thomas. I think it is very fair to say with our offensive line getting shifted a bit to make it more solid against the pass rush we should be able to have an even better year than last.

You and I both know we don't need a dominating run game to win with the team we have.  But wouldn't it be an unstoppable option?  Would it be worth a little less passing firepower to have another option on offense than a 3, 5, or 7-step drop?  I think so and many of you do too, but it doesn't seem to me like our team does.

The one thing that I see that speaks against my take here is the move of Orlando Franklin to left guard. That could be a huge benefit in our run game especially when you take into consideration that the majority of our run plays are inside runs to one side or the other (guard play is very important in any of the variations you might draw up for them).

Pot Roast: I lead everywhere I can

Demaryius Thomas met with the media today after OTAs to discuss that and other things.

Pot Roast: I lead everywhere I can DT: Manning's arm is getting stronger still

But even I can't drink enough kool-aid to think that that is enough to offset the glaring problem we have at running back. Many at Mile High Report love them some Montee Ball. He's the next Terrel Davis (to which I say PSHAW...those who make that comparison probably didn't watch TD play or they'd know how absurd of a thing that is to say)!  Dude is a 2nd year RB.  Yes he looked very good at the end of last year. Is he ready to be the starter?  We're going to find out for sure and he could be awesome

But what about behind him?  Our team has a truck load of nothing behind Montee Ball. Our personnel decisions this year show me that we really don't care about the running game much at all. It just doesn't fit with our team attitude on offense. We can't slow down the TD machine by running stretch zone plays for 4-5 yards in today's NFL so why get depth at a position that we don't value?

The one injury that scares me more than any other for the 2014 season would be Montee Ball. Maybe the run game is an archaic tool in today's NFL, but I do know what happens when a team's offense is one-dimensional in today's NFL and it ain't pretty Mile High.

But enough of my sky falling story.  What do you guys think about our team attitudes?  What do you see that I don't? Hit up those comments...it isn't like you have a football game to watch.