Tis a wondrous time of year for smokescreens, yet these words seem to ring true.

Well it takes a lot of patience and its hard because there's so many good players in this draft, you sit there and kind of hope and see if they're gonna fall to us...try to get ourselves in the best position to get a football player that can help us--especially in the 1st round.

The Broncos don't have a lot of holes.  We can debate until we're ready to start slinging chairs, but outside of the Mike LB spot, there really aren't any openings for a draft player to come in and compete to start.  DL is set, the secondary--injuries and all can all but be penciled in....and for those of you that scream for an OT prospect, I highly doubt that player can come in and produce better than Orlando Franklin and Chris Clark from day 1.

So what does all this mean?  It seems like the Broncos have some specific players targeted and for the first time in the John Elway era, we might see a trade up in round 1 of the draft.  I've done simulation after simulation and sometimes the board falls in a way that a handful of excellent prospects are there at 31, while at other times, you're begging for there to be at least just one blue chip prospect.

Given the Broncos limited starting needs and their draft position, I would say Elway and co. are more than willing to burn some draft currency to move up and get their man.

Mock of the day 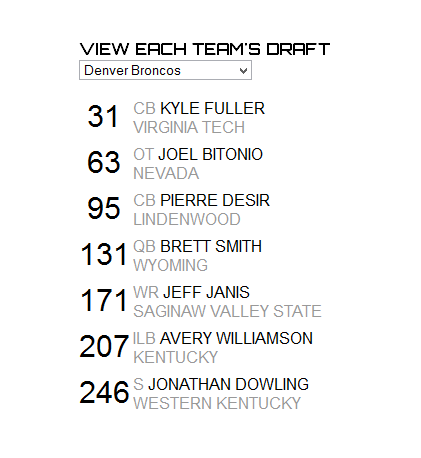 Well folks there's your coveted OT.  He fell all the way to the backside of round 2.  We also picked up some immediate help at corner in Kyle Fuller and restocked the depth chart with Jonathan Dowling and Pierre Desir.  Add to that the acquisition of QB Brett Smith and WR Jeff Janis and you have yourselves a relatively balanced draft.  Can Avery Williamson be that Mike?  You tell me!