Come Thursday all the speculation and talk will finally be rendered meaningless. The mock drafts will dissipate into oblivion, and we will have our final answer as to how this team will be constructed in 2014.

Some of my pre-draft thoughts

Mock of the Day 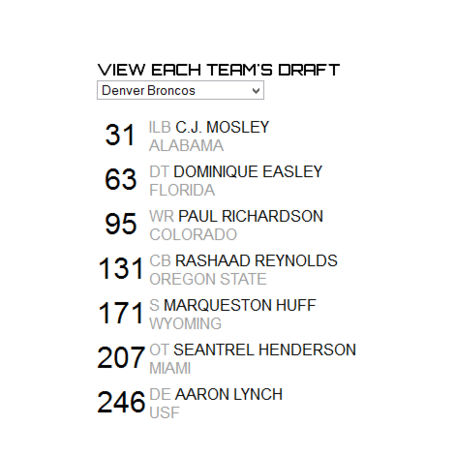 In round 7 Broncos take a chance on Tim Lynch's long lost brother Aaron Lynch, and  I'm 99% certain that if this pick occurred here in the draft that most of Lynch family would collectively wet themselves into a euphoria (hyphen) induced coma after which the rest of the draft would be rendered meaningless.  Can you say #joygasm Timmy?

All joking aside, I'm happy about the first three rounds and happy that the next four guys have an opportunity to work themselves into a roster spot.  I'm seeing Mosley fall in quite a bit of the mocks out there, and I have to remember that old adage of "beware of Alabama defenders".

Peyton Manning pays respect to retiring Derek Jeter - NFL.com
Peyton Manning is on the back nine of his career. On Sunday, the Denver Broncos quarterback visited a friend whose retirement is imminent: Yankees legend Derek Jeter.

Klis: Trading up still possible in deep draft - The Denver Post
If quarterbacks Johnny Manziel of Texas A&M and Blake Bortles of Central Florida are among the first eight selections in the NFL draft Thursday, other projected top-10 picks at non-QB positions will get pushed down the board.

Kiszla: Denver's D would be dominant with Alabama's C.J. Mosley - The Denver Post
The player the Broncos need in the NFL draft? It's a no-brainer: Alabama linebacker C.J. Mosley.

Room with view of NFL draft awaiting Denver Broncos brass - The Denver Post
Johnny Manziel will be in the Broncos' draft room Thursday. John Elway and John Fox will be in there too. They will be sitting in chairs at a large conference table. The third John, more universally known as Johnny Football, will have his name listed on the Broncos' draft board, presumably near the top.

2014 NFL Draft: Johnny Manziel Top 5? Khalil Mack No. 1? More rumors | The MMQB with Peter King
My meandering T-minus-three-days draftapalooza column (attaway to sell the column, King!) includes an eye-opener from Mike Mayock, predictions from the cognoscenti, separating fiction from fiction [cq] on Johnny Manziel, a rundown of places I think I think I know something about, a way to make a fou...

Curious lack of extensions for 2011 first-round picks | ProFootballTalk
Of the 32 first-round draft picks from 2011, 21 have had their fifth-year options exercised.  But none have received new contracts. None.  As it not a single one.

Phil Emery not into drafting late-round quarterbacks - NFL.com
Jordan Palmer is the Chicago Bears' backup quarterback, and general manager Phil Emery doesn't sound like a man ready to draft a late-round signal-caller to compete for the job behind Jay Cutler.

Report: Raiders not considering Manziel or Bortles with fifth pick - NFL.com
Who are the Raiders considering with their No. 5 overall pick in the 2014 NFL Draft? According to a report, neither Johnny Manziel nor Blake Bortles.

Mock Draft 6.0: Four-round 2014 NFL Draft projection - NFL.com
This mock sucks more than the one Scotty did the other day :P