The Denver Broncos have made their choice in the 2014 NFL Draft - CB Bradley Roby, Ohio State. 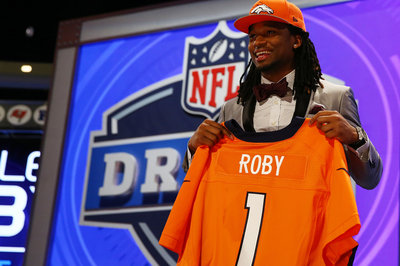 A wonderfully athletic football player, some considered Roby (5-11, 194) the most naturally talented cornerback in this draft class.  He has a reputed mean streak and level of toughness that falls right in line with Denver's 2014 defensive makeover. However, discipline concerns - on and off the field - saw him nearly slip out of the first round altogether before the Broncos drafted him 31st overall.

There were times in 2013 where Roby looked every bit the top cornerback prospect in this year's draft. There were others, though, where his lack of instincts and discipline caused him to get passed up by corners with less pure ability.

Four other cornerbacks were drafted ahead of Roby.

Of perhaps greater concern is his off-field history. Roby was recently charged with OVI and also missed the first game of the 2013 season with an assault charge.

This is a boom-or-bust pick. If Roby matures, he will flourish in the NFL with the Broncos, and help Aqib Talib and Chris Haris Jr. form one of the fiercest, toughest secondaries in the NFL. If he doesn't mature... well, that's the benefit of the "Best Player Available" route. The Broncos are still in good shape with Talib and Harris as starters.