With the 56th pick in the 2014 NFL Draft, the Denver Broncos select... Cody Latimer, wide receiver out of Indiana.

As far as top needs fans listed for the Broncos heading into the 2014 NFL Draft, cornerback and wide receiver were two of the top four. 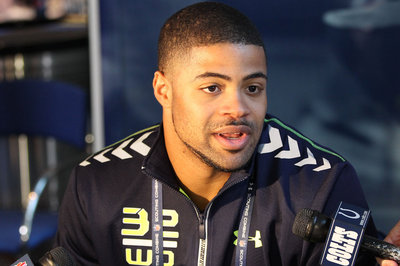 With the 56th pick in the 2014 NFL Draft, the Denver Broncos selected WR Cody Latimer out of Indiana.  The Broncos traded their 2014 5th round pick and their 2015 4th round pick with the San Francisco 49ers to move up seven spots and grab Latimer. They also received San Francisco's 7th round pick this year.

The heir apparent to Eric Decker is a virtual clone of him. Same size, similar productivity (albeit in fewer years at college), and just slightly faster speed.

If you can't keep your talented wide receiver, draft another.

"I get to a great organization with a great quarterback," Latimer said, who was in New York for the draft festivities. "It was worth the wait."

Asked if the Broncos were going to win the Super Bowl this year, Latimer replied quickly, "Oh they're gonna win it."

The Broncos addressed cornerback with their first pick by selecting Ohio State's Bradley Roby. They have one more pick today, 95th overall, in the third round.

You know me - I'm all about BPA (Best Player Available). Trading away draft picks and moving up for a guy you like doesn't fit that model. So I'm not a fan of this move. The Broncos filled a need here, though, and I like what Latimer offers on paper. Now I've got to go look at the tape!

Broncos Country, what do you think of the pick?