Broncos draft Michael Schofield at No. 95

With the 95th pick in the 2014 NFL Draft, the Denver Broncos select... Michael Schofield, OT, Michigan.

Share All sharing options for: Broncos draft Michael Schofield at No. 95

The Broncos added depth to their offensive line Friday, selecting offensive tackle Michael Schofield out of Michigan near the end of the third round. Schofield had a terrific Senior Bowl, according to Mike Mayock of the NFL Network, but the analyst didn't expect Schofield to be drafted until the fourth or fifth round.

"Not a highly acclaimed kid; a late add [to the roster]," Mayock said. "I thought he stoned everybody in the [1-on-1] drill. Now, he's a right tackle only, in my opinion. They tried him at guard. Right tackle only is not a good thing to be in the NFL unless you're a starter. I think he has the potential to be a starting right tackle." 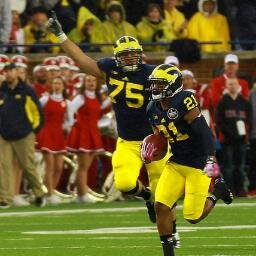 Schofield, who started opposite first round draft pick Taylor Lewan, played in 52 games for the Wolverines, starting 26 at right tackle and 10 at left guard. That type of versatility is certainly of value to Broncos GM John Elway, who can now add Schofield to the competition at left guard and right tackle brewing between Chris Clark and Orlando Franklin.

The pick fills another need for the Broncos, who have been focusing on the holes in their roster throughout the 2014 draft. With their first pick in the 2014 NFL Draft, the Broncos addressed their secondary, drafting cornerback Bradley Roby No. 31 overall. With their second pick, the Broncos moved up and found a potential replacement for Eric Decker, drafting wide receiver Cody Latimer No. 56 overall.

The Broncos are scheduled to be done for the night and will draft again in the fourth round Saturday.

What do you think of the pick, Broncos Country?