How much longer can the off season last? Forever. Or at least it seems that way. It's times like this that I pull out the History of the Denver Broncos DVD or rewatch the two Super Bowl victories. Now's the time to make sure that last season's beer and wing stains have been thoroughly scrubbed from the game-day jerseys. A time to go through the hat collection and find the one variation of logos and colors that you may not have. Oh, and no arrests to report, it's time to read up on pleasantly banal stories of the off season.

...but before we get to the banal, a moment of seriousness.

I know that Tim mentioned it in last Tuesday's Horse Tracks, but I wanted to take a moment and highlight it a bit more. Amy Van Dyken suffered a severed spine and was paralyzed in an ATV accident earlier this week and is still in the hospital recovering. I've enjoyed hearing her a few years back on the KOA pre-game as well as her recent stint co-hosting with Rob Dibble on Fox Sports. Folks, she's a Broncos fan through and through (so much so that she married our former punter, Tom Rouen). Please take a moment and send some positive thoughts her way while she recovers.

OFFER ON THE TABLE

The Denver Broncos have offered wide receiver Demaryius Thomas a five-year deal. News of an offer and not of an acceptance is certainly interesting. No telling what games of cloak and dagger are playing out behind the scenes between Thomas' agent Frank Bauer and John Elway. All I know is that I want Thomas back in orange and blue for years to come. Here's hoping a deal comes together soon. Thomas is set to be a free agent after next season.

Broncos defensive tackle Kevin Vickerson is ready to get back on the field. 'Ready' is an understatement. Hungry is more like it.

"I want to go to the Pro Bowl. I want to be one of the best D-tackles in this league," Vickerson said. "That's never going to stop my ambition to be the best. Just trying to help these guys, the younger guys I have with me. Just bring them along and try to catch up to where I left off."

Here's hoping that Big Vick's recovery is complete when training camp rolls around and that he achieves those goals.

"Too often last year we let people go over the top of us or run through us," Broncos defensive coordinator Jack Del Rio said.

Although all phases of the Broncos game will certainly be scrutinized going into next season, ESPN.com took some time to focus in on Denver's secondary woes from last season.

Former wide receiver Ed McCaffrey (and namesake of my now 10-year old cat... ahem... anyways...) is once again out in the community doing good. His football camp, "Dare to Play" and cheerleader camp, "Dare to Cheer" are teaming together Valor Christian students and kids with Down Syndrome. Cheers to you for making a difference, Eddie. 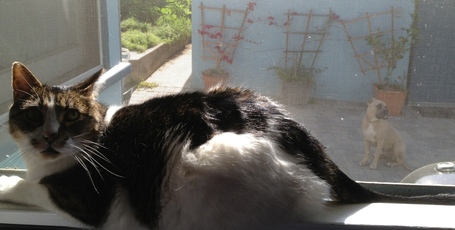 Have a great weekend, Broncos Country!