To all you dads out there thank you for all you do to make the world a great place for your sons and daughters to live! Later on Ian Henson will put together a post from the staffers to their dads, but I wanted to include my response here.

As far back as I remember our home was Orange and Blue.  It was a Sunday ritual.  Football with dad.  As I got older, my Pal (our nickname for each other) got me into the Police Athletic League and I played for the North Denver Broncos (or Bucking Broncos as some knew it).  My Pal was self-employed so everyday he would take the time to wrap my knees and ankles and drive me to practice.  Everyday, every-game he was there to watch.  My pre-game meal was a concoction of potatoes and eggs he cooked over the skillet.

Our relationship went much deeper than football however.  He took me to school and picked me up in the afternoon.  He taught me that school was a place to learn, not a place to screw around.  He taught me the value of respect. Never was he too busy to talk to me, to read me a story at night, to play a game of catch in the alley and laugh as I practiced getting two-feet in bounds on his sideline passes.

He taught me how to catch nightcrawlers in my mother's garden the night before a fishing trip, being all too careful not to flash the light directly on their shiny bodies.  He taught me to respect nature and enjoy the beauty around me.  The time he had was mine and he gave of himself all too freely.

Later on he had some legal issues and found himself in jail.  This was the beginning of my Freshman year and without a doubt one of the toughest periods in my life.  My best friend was no longer there, but my memories of him were dear to my heart.  I remembered his love, and I remembered his wisdom and advice.  I was not a perfect kid but I turned my adversity into an opportunity to succeed.  My competitive drive helped me stay the course.  My love for my family and my Pal kept me in line.

One day as a Junior I exited the doors of the West end at Denver North High School just like any other day to hop into the car with my mom to go home.  As I looked toward the direction of where she would be I noticed there was a man in the passenger seat.  As the man opened the door and got out I was stopped dead in my tracks.  It was my Pal.  He was released early on a work-detail.  I instantly grabbed at my heart and rushed like the Broncos offense to the line.

It was the biggest hug I've ever given.  A piece of my heart was back in it's rightful place.

I had a deal with my Pal that every semester I logged straight A's he would give me $150.  At that point I had logged 8 straight semesters of nothing but A's with a 9th all but in the bag.  He paid me every penny.  My Pal is a man of his word.

We all have those people in our lives that help mold us into who we are.

These days I get to see my Pal at least once or twice a month, more in the summer when I'm not working (teacher) and can spend the time.  At the age of 65 he's still going strong.  One of the best structural detailers in business.  Someone who uses his free time to do projects around the house.

Many of our conversations and shared memories have to do with the Broncos and football.  I still remember hugging him and jumping around the room like idiots when the Broncos won their first Super Bowl.  I still find the time weekly to call up and talk about the game.  I've even had the privilege of taking him to a couple of games.

Football however is just one aspect of our relationship.

My dad has always been there for me.  My dad has sacrificed his life for me.

Football may have been the means, but the language is love.  There is no love like the one shared between a son and father.  It is hard as men to express the way we feel at times.  The words aren't always there, but I hope that my Pal knows just how special he is to me.

I love you dad.  There is no greater father than you on the face of this earth.  Thank you for giving me the gift of life and more importantly showing me how to enjoy it.

There will never be another you. 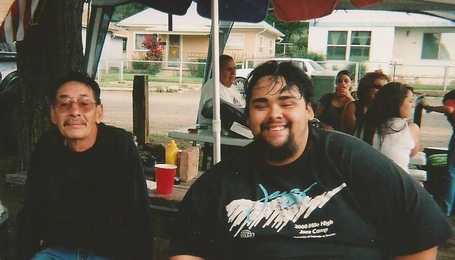 I Swear! Ain't nothing like the bond I have already with my daughter. #ImsoInherpalms #proudfather

With life lessons from Archie, Eli Manning paves his own way in fatherhood | NJ.com
The Giants quarterback doesn't remember his father, Archie, playing in the NFL

Rookie Lamin Barrow Building Legend at Broncos Minicamp
Rookie linebacker Lamin Barrow is building a legend at the conclusion of Broncos minicamp, just over a month before training camp.