Broncos Father's Day Special: What's in a dad? Tell us your story

Happy Father's Day to all the dads out there. Mile High Report would like to take a moment to thank our own dads. Please share your story with us in the comments.

Share All sharing options for: Broncos Father's Day Special: What's in a dad? Tell us your story

Happy Father's Day to all the dads out there. Mile High Report would like to take a moment to thank our own dads. Please share your story with us in the comments. Here are some of our "dad stories."  A big ole hat tip to Laurie for this great idea of a post!

I don’t remember the first time I watched a Broncos game with my dad because it always just was.

Since the beginning of my memory, Sundays were synonymous with church, flag football and then Denver Broncos at 2 p.m. (and on the occasional 11 a.m. game, we sometimes got to get out of church early, which was an extra bonus!)

Though my dad grew up in Texas and will probably be a lifelong – although sometimes quiet – Cowboys fan, he added the Broncos to his cheering section when I was born and we moved to Colorado. As the Orange Crush emerged, my dad became a fan, and I think he even cheered more for the Broncos in the ’77 Super Bowl (at least on the outside) because more than anything, he is a family man and "we" were Broncos’ fans. 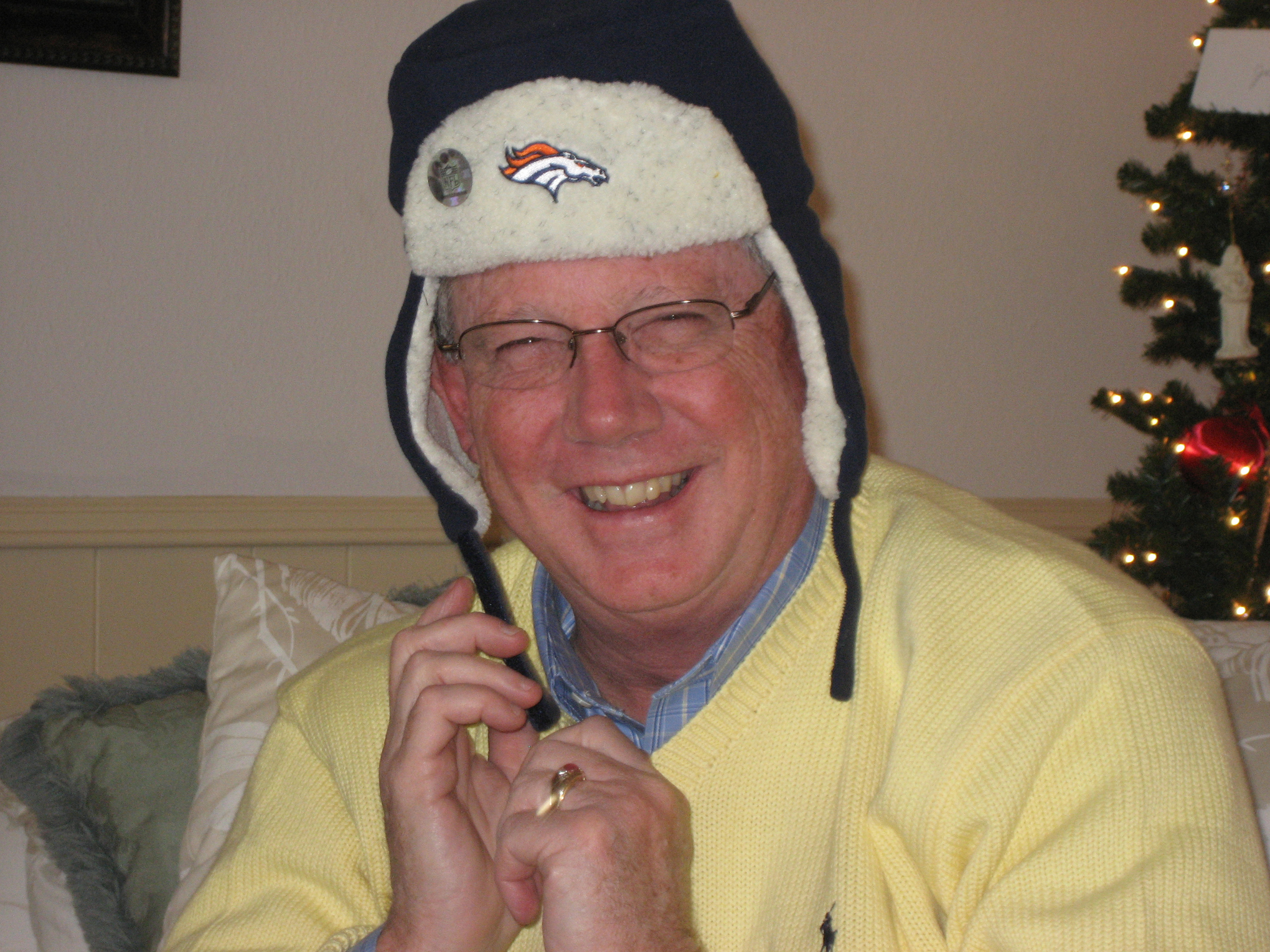 I loved every Sunday afternoon during football season in our living room – everyone would be yelling at the refs, analyzing the coaching calls during commercials, or going crazy when Elway would maneuver yet another come-from-behind victory.

There is absolutely no greater feeling than the raw emotion that just happens when your team makes a surprising – and usually impossible – play to win a game. (Kids being born and weddings are special and remarkable moments, but in my mind, a whole different realm.) An interception or touchdown to save the game that inspires jump-around-like-a-crazy-person kind of joy is the most awesome feeling you can’t imagine until it happens.

I live for those moments, and I have my dad to thank for the fact that I (and my whole family) can appreciate those rare but awesome times.

Once my younger sister was competing in a gymnastics meet in Denver that was taking way too long. So my dad decided on a whim to take me and my little brother over to Mile High Stadium where we bought overpriced tickets to sit in snow-covered seats in the South Stands.

But it was totally worth it when we watched Denver beat the Chiefs 14-13 in a fourth-quarter comeback. My sister and mom may never forgive us, but it was still a great memory (and as my dad likes to remind her, the game ended better!)

To this day, even though none of us lives in Denver, we try to get to Mile High for a family reunion game every year. And at the very least, we text each other non-stop during the games – still yelling at the refs, still analyzing the coaching decisions, and still jumping up and down together…just like when I was a kid at home.

Though I have a lot in common with my dad, and we can talk about education, politics, religion, media and history at any given moment, sports – and especially the Broncos – is always the great connector.

I love my dad for many reasons, but one of them will always be how he likes to spend Sundays.

My first memories of football centered around that great San Diego Chargers offense of the early 1980's, with Dan Fouts and Kellen Winslow. My earliest memory included a high scoring Monday Night Football game between those Chargers and the Miami Dolphins.

As a San Diego native, both my parents were hardcore Chargers fans and nearly every aunt, uncle and cousin were crazy for the Chargers as well. I grew up hearing, "San Dee-eggo ... SUPER CHARGERS!" and frankly, that was when my love affair with football in general began.

For me, fate seemed to have other ideas when it came to football teams to root for. Even as a young boy living in sunny San Diego, I had a great deal of affinity for mountains and the cold. As you can see from the Chargers pajama-wearing, flip-flop, snow trampling little guy below, the cold was awesome. 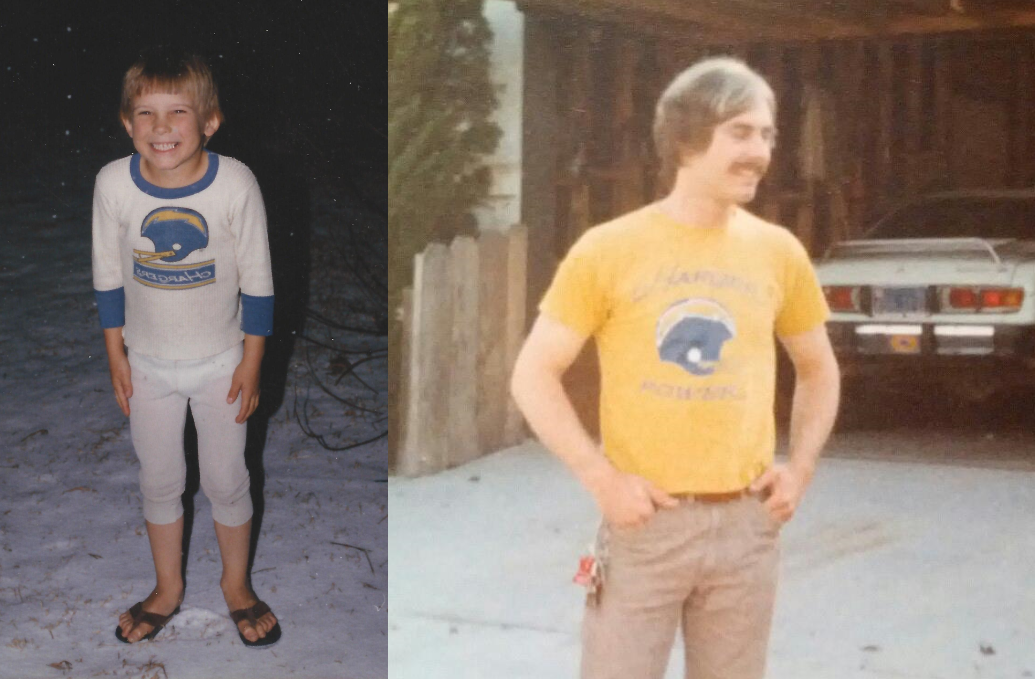 After my mom remarried to a Redskins fan, we moved first to Texas when I was six, then on to Pagosa Springs, Colorado in the mid-80's. From there, I began to watch this guy named John Elway play football. You know him, I'm sure. My loyalties gradually shifted towards the orange and blue, when, on January 11, 1987, I became a lifetime Broncomaniac.

My dad still can't believe I became a Bronco fan (pictured above), but fate smiled upon me all those years ago. Had I remained a Chargers fan, think of all the disappointment and disparagement that would have brought into my life? Thankfully, I was able to enjoy six Super Bowl appearances and celebrated along with the franchise a great multitude of achievements few teams have been able to accomplish.

So for this Father's Day, I had my Dad dig this old photo up of me, so I could share it with you and with everyone who knows me. I'll take the laughter and ridicule if there is any, because I think it’s the least I could do for betraying my own father's desire to make me follow in his fan footsteps.

Happy Father's Day to all you dads out there ... even my Charger-loving one. Aside from his choice of football teams, he has been one hell of a positive influence in my life.

I can't remember my first Broncos game with my dad; like Laurie, it always just was for me. I was born in Colorado, so my citizenship in Broncos Country was naturalized (some of my siblings couldn't say the same; we love giving them grief for that).  Still, Broncos always 'just was' for my whole family - all nine of us, six boys, one girl, Mom and Dad, all cheering for the Broncos (when we didn't have church) each Sunday.

Still, many of those memories are blurred for me - a delightful blue and orange haze that helped form the Broncos fan I am today. But I do have one distinct memory of watching the Broncos with my father when I was very young. I don't know why it has stuck with me, but it always has.

During one Broncos game, I was very mad at my father. I don't know why; maybe he didn't give me ice cream that day.  But I was so mad at him, and he was watching the Broncos play the Vikings, and I wanted to rebel.

"Dad, I'm going to like the Vikings now. I don't like the Broncos," I said, with a vengeful spite.

"But you want me to be a Broncos fan!" I exclaimed.

My bluff lasted all of 30 minutes. I was a Broncos fan again before the end of the game, and from that moment my place in Broncos Country was mine by choice - not by naturalization, not by inheritance, and not simply to please my father. I was probably still quite mad at him. But we could cheer a Broncos victory together. And we would cheer many more since. 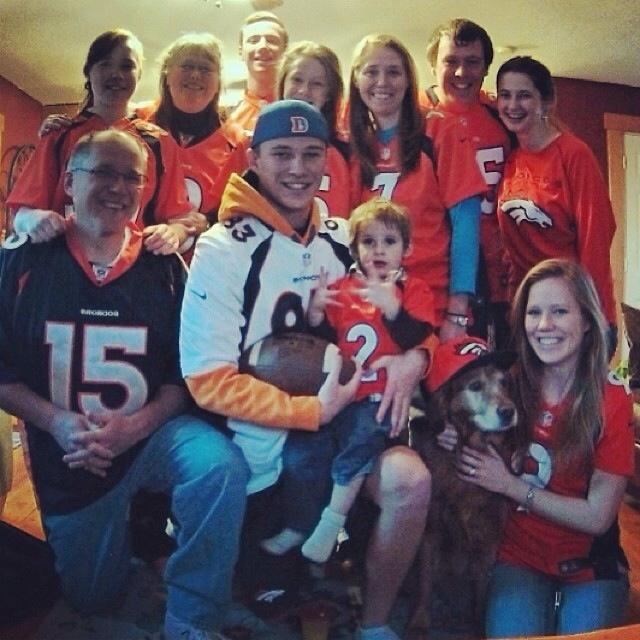 I actually never lived in Colorado, but my family did during the late 1980s and early 1990s, back when John Elway was doing his thing. My family, Dad in particular, became Broncos fans while they lived in the Denver area and that fandom continued on even after they moved to Pennsylvania, where I was later born. As I grew up with a family that loved the Broncos, that love was instilled--and exaggerated--in me. Many things that my father liked, especially when it comes to sports, I also like, at an increased level. Dad's the reason I have a passion for football. Him taking me to games, whether a 28-17 win over the Bills on the road in 2005 or a 27-17 loss to the Redskins on the road in 2009, and telling me stories of his high school playing days only made my love of the game stronger. I am a product of my father (and my mother, and my entire family). I love you, Dad. Thank you for teaching me not only the fundamentals of football, but also the fundamentals of life. You are my hero.

Excerpted from Horse Tracks today; be sure to read his full story.

As far back as I remember our home was Orange and Blue.  It was a Sunday ritual.  Football with dad.  As I got older, my Pal (our nickname for each other) got me into the Police Athletic League and I played for the North Denver Broncos (or Bucking Broncos as some knew it).  My Pal was self-employed so everyday he would take the time to wrap my knees and ankles and drive me to practice.  Everyday, every-game he was there to watch.  My pre-game meal was a concoction of potatoes and eggs he cooked over the skillet.

Our relationship went much deeper than football however.  He took me to school and picked me up in the afternoon.  He taught me that school was a place to learn, not a place to screw around.  He taught me the value of respect. Never was he too busy to talk to me, to read me a story at night, to play a game of catch in the alley and laugh as I practiced getting two-feet in bounds on his sideline passes

How has your dad impacted your role in Broncos Country? Let us know in the comments, and Happy Father's Day to all of our MHR reader dads!