Last offseason I scouted a number of players entering their fourth, fifth and sixth seasons. It was popular, so I wanted to continue this series during the 2014 off-season. Many of these players are commonly discussed, but we too often misunderstand what type of players they are now. While few players make big strides in years 1-3, by a player's 4th year they should have progressed in a number of areas. With that mentality I wanted to approach my study of these players like an NFL scout would a rookie, looking back on the most recent season's game film and then write up a scouting report. By doing this I feel the Broncos fan base can create a more up-to-date picture of what these players strengths and weaknesses are instead of relying on what we remember from their early careers.

I'm going to be using the CBS Sports player profile outline, since it's so robust and even used by NFL.com now. They break the players skills into a variety of categories and then give them a score for that category by looking at every snap they play. For each player I'll try and do my scouting with either a member of an NFL team staff or a someone from a reputed scouting site. Our method is straightforward with me watching every game and snap while my partner does this separately. Then at a later date we watch two to four games together and compare notes. Following this session we assign a score for a variety of categories depending on the position. For example the average NFL starter at any position will be a 7, a 9 would be a Pro Bowl or All-Pro level player while an 8 is a very or above average starter. A 6 is an area of concern while a 5 is likely reason to be benched. This is a methodology I started two years ago and which I first used last off-season while working on perfecting it these past few years.

For this study I was extremely blessed to work with Jordan Callis; he retired last year after serving as the tight end coach for three NFC teams during the 2000's.  As always I wish I could include more clips but since these articles are so long anyways, including more than one or two plays would only increase the length. Because of this I almost always try and include a positive play by the player rather than a negative one.

*This isn't a predictor of future success. It's an assessment of their ability currently; it's how they performed in the past.*

Athletic Ability: Green is a very underrated athlete. Last season he was strongest tight end the Broncos had on the roster and possibly the fastest. He was also the tallest skill position player on the Broncos roster. Often times we think of the other elite athletes on the team, like Demaryius Thomas, but Green is just amazing in terms of his speed, acceleration and overall strength. Green also knows how to use his size, we often see larger players not understand how to use their size, or they mis-use it. We saw this last season with Green's fellow tight end Julius Thomas when it came to his blocking, he is a big player but doesn't understand how to use his size. Green possess the best physical skill set of any of the Broncos tight ends and he also knows how use that size effectively.
- GRADE: 8.2

Football Sense: Green's understanding of what is happening on the field is inconsistent, at times he can perfectly read a feign blitz but then the next play he's whiff an easy linebacker blitz. This inconsistently isn't real common but it should be noted. Overall though Green is quite intelligent, quickly adapting to Peyton's pre-play blocking assignments. In how it impacts him as a receiver he is surprisingly adept at always keeping inside leverage against his defender and I was surprised to not how effective he was at not allowing defenders to get inside of his route. He can be a bit slow off the snap though as a receiver, but not as a blocker.
- GRADE: 7.0

Run Blocking: Going into this I expected a lot just from my initial viewing of the games, but I was frustrated at times by Green's run blocking. By in large Green was an exceptional run blocker, and when he was on he was the best run blocker I've seen in a long time, but it was the times he got lazy that things got messy. On a handful of times Green was either tired or just lazy in terms of his blocking and it was a painful experience. During these rare times Green had a clear blocking assignment, nothing confusing, no trickery by the defense, he would either just let the defender run by him or he'd do a weak chip block, this lead to some runs ending before they got back to the line of scrimmage, and it needs to be mentioned. Having said this, Green was, for the most part, a very good run blocker. When the Broncos ran behind him compared to running behind the other tight ends they average 1.7 more yards per carry (3.1 YPC when the back ran behind Dreessen, Tamme and Julius and 4.8 when they ran behind Green) and on film it is clear why. To illustrate Green's ability, let's look at one of his best blocks which came against the New York Giants in week 2: 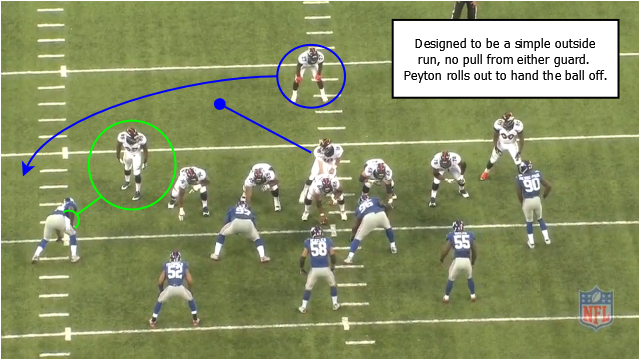 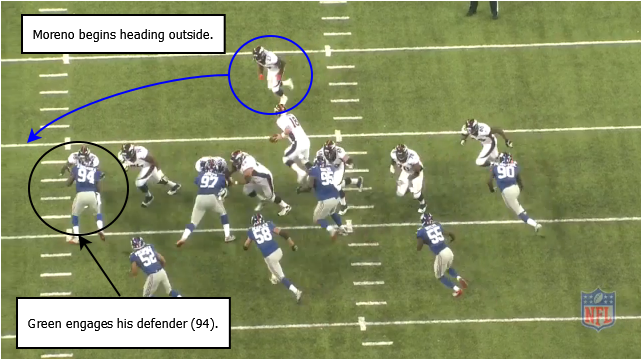 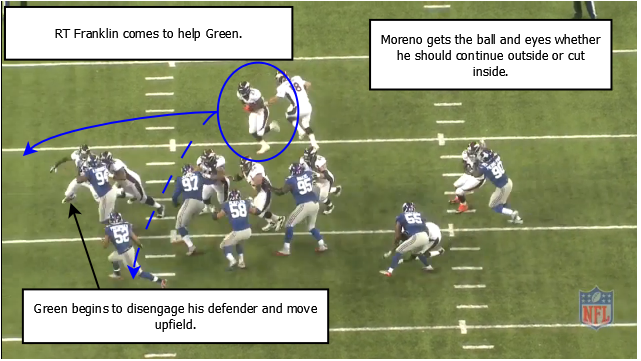 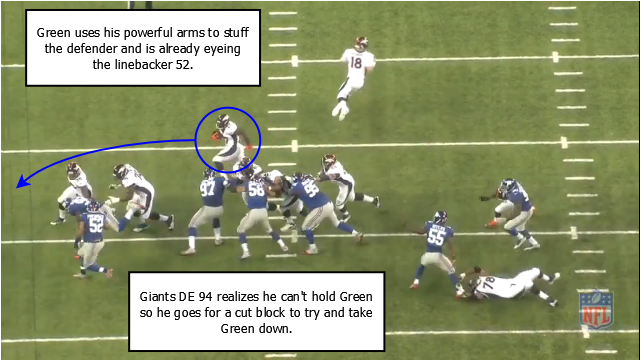 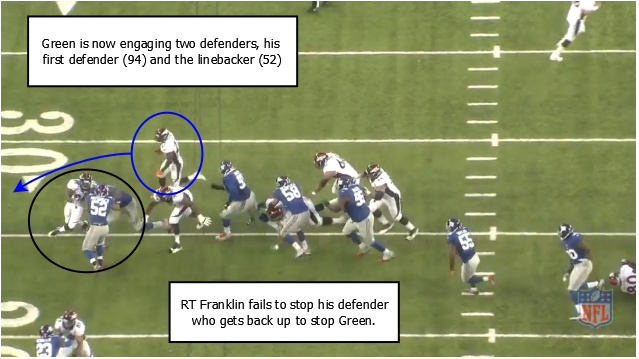 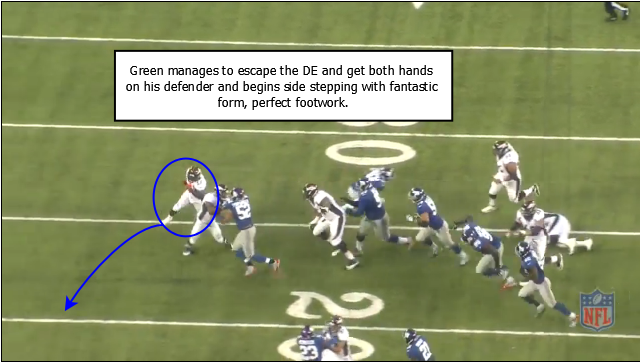 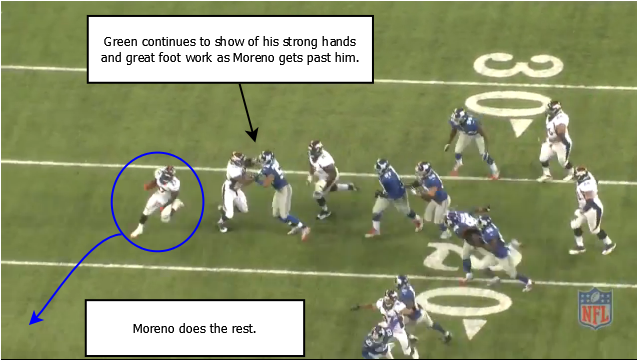 Pass Blocking: While Green doesn't have the peak skill at pass blocking he does at run blocking, he was far more consistent, giving up no sacks all season and only one hit during his 51 snaps as a pass blocker. Of the tight ends he was the most powerful tight ends when he acted as an inline tight end, shutting down some of the better outside pass rushers ranging from the current Bronco DeMarcus Ware to the Chiefs fantastic tandem in Tamba Hali and Justin Houston. He has strong hands to stop the quicker moves of Hali but also the brute strength to stop the more powerful rushers like Ware. While not perfect, Green had very few mistakes throughout the season and was a cut above the rest of the Broncos tight ends, not close.
- GRADE: 7.9

Route Running: Green's sample size is a bit limited so for his receiving we went back and looked at his 2012 film as well for this topic. Despite a small sample size Green showed crisp route running, the issue arose from the fact he was extremely limited in the routes he was used. In 2013 almost all of his 65 routes were five yard out or flat routes, limiting his overall physical skill set. Despite this, Green had very smooth hips and a good shake when he makes his cut.
- GRADE: 7.0

Hands: I'll keep this short and sweet, Green knows how to catch a ball. While he only has 22 targets, he also has only one drop during his entire career. He catches the ball away from his body, extending his arms and then pulls the ball in and under. Now a number of of his passes went low and away, just the nature of his routes, so he also had to catch the ball breadbasket style, not the best form. While with the routes he was running it may have been easier, it could potentially lead to more drops if he got more opportunities.
- GRADE: 7.1

I was surprised by Virgil Green during this study; watching him I was impressed by the fact he wasn't getting more snaps, he does it all very well. He's a solid blocker and has the physicality in all phases of the game to dominate. Green seems possesses the tools and intelligence to be a starting, three down tight end in the NFL. Now I won't get into the Broncos roster but we were quite impressed during this film study, Green was consistent and reliable, and while he did make mistakes, they were rare exceptions, something that we were taken back to see.