Welcome to MHR's 2014 fantasy football guide to choosing Denver Broncos players in your upcoming fantasy drafts. Why choosing Peyton Manning in the first round isn't necessarily a smart thing to do; why selecting Montee Ball in the first round could be a smarter move; and where the Broncos receivers stack up against the rest of the league; all in this edition of Denver Broncos fantasy football focus.

The NFL season starts 73 days from now, which means that the game within the game, fantasy football, will begin even sooner. For some, fantasy football is a year-round activity; you update your rankings before and after the NFL draft, keep a close eye on injuries around the league, and read up on every single game during the season, hoping to gleen that extra bit of knowledge that will help you on the waiver wires. Others play fantasy football casually with friends, co-workers, or family; you choose your teams based on favorite players, and pride yourself in the appetizers you bring to the yearly live draft. For these types of players, and all players in-between, here is an outlook on the Denver Broncos offensive players from a fantasy perspective.

Peyton Manning is not thinking about retirement

Peyton Manning is not thinking about retirement

Quarterback is one of the most important positions on your fantasy football team; however, it is a position that is not disparate of talent. Most fantasy leagues require one quarterback per team, which means that if you're in a league with 12 or less teams, you're likely to find a solid quarterback without drafting one too high. The key to selecting a quarterback is to look at their value at the position you are drafting them; if you draft Matt Stafford in the first round, you'll likely still get big points from him, but you will have missed out on selecting a player in a position that is more strapped for talent. On the other hand, if you can get a quarterback like Matt Stafford in the fourth or fifth round, you'll be laughing your way to victory (if you drafted the rest of your team well).

Because of this value-based approach to picking a quarterback, Peyton Manning is an ideal pick in the second or third round of a draft. Due to his immense success in 2013 though, you're going to likely have to spend your first round pick on Manning if you want him on your team. Fantasyfootballcalculator.com, which tabulates thousands of mock draft rankings, has Manning slotted 12th in 12-team leagues as of May 2014. Manning should be the first quarterback off the board in most drafts, and will guarantee you big production, even if it is slightly lower than last year. The loss of Eric Decker will be nullified by the arrivals of Emmanuel Sanders and Cody Latimer, and Manning should enjoy yet another season of great fantasy production. The only quarterbacks who compare to Manning in fantasy production will be Aaron Rodgers, Drew Brees, and/or*maybe* Matthew Stafford.

Running back is the most important position on your fantasy team. Most leagues require two starting running backs, as well as a flex player that can be a back or a receiver; if you don't manage to have at least two-three strong running backs, your team will likely struggle throughout the season. The difficulty with running back is that there is a huge drop-off in talent once the core group of players is chosen, meaning that there is a huge need to take good backs while they're available. Montee Ball is coming off of a season where he spent the majority of the time behind Knowshon Moreno, but had success when he saw snaps. Ball is part of the NFL's best passing offense, meaning that he'll likely face some weak defensive fronts and have room to run the ball. But here's the thing: Ball is the guy in Denver. No one will be taking many snaps from Ball this season. That's rare in today's running-back-by-committee-fueled NFL.

Reports from Broncos camp revealed that Ball has improved his receiving skills as well, making him even more valuable. Ball will be a first round pick in some leagues, but is more likely a guy who should be targeted in the mid-late 2nd round.

If you feel the need to take a handcuff, C.J. Anderson is the best bet right now.

Another factor that comes into play when drafting backs is the idea of hand-cuffing the back-up back with the starter. This can be done to ensure that you still have a starting back if your starter happens to get injured mid-season. For example, Jamaal Charles' handcuff in Kansas City would be Knile Davis. Handcuffing is tough with the Broncos' running backs though, because it is hard to say who will be the definitive backup in the 2014 season. Undrafted rookie, Kapri Bibbs has impressed during OTAs, CJ Anderson saw some snaps in 2013, and Ronnie Hillman is clearly being kept around for a reason. For now, I would stay away from handcuffing anyone to Montee Ball if you draft him because the three Denver backups will more-than-likely wind up on the waiver wire in most leagues and will be available to pick up if Ball goes down; however, if you feel the need to take a handcuff, C.J. Anderson is the best bet right now.

Wide receiver is slightly easier than running back to find talent at in the later rounds of a fantasy draft; however, this is not always the case, depending on how other owners in your league draft and what type of league you're in. If you play in a PPR (Points Per Reception) league, which rewards players points for each reception, as opposed to a standard league which does not, you'll be seeing a lot more receivers jump off of the board earlier in the draft. There are few receivers in the NFL who have the talent that DT has, and his partnership with Peyton Manning doesn't hurt one bit. Thomas shares similar talent to Cincinnati's AJ Green, and Dallas' Dez Bryant, but has an advantage over these two because he's catching passes from Peyton Manning, as opposed to Andy Dalton or Tony Romo. Thomas is especially valuable in PPR leagues because of the quick pass offense that the Broncos play, which often includes screen plays to DT. In standard leagues, you should be able to get Demaryius in the second round, as Megatron is usually the only receiver drafted in the first. In a PPR league, the star Broncos receiver has a good chance of being chosen in the first to early-second round in almost every draft. 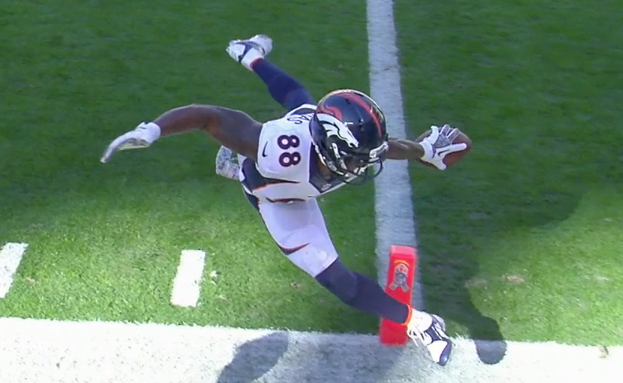 Emmanuel Sanders didn't turn down contract offers from other teams for no reason; he knew he wanted to make fantasy owners happy this year, so he chose the Broncos, or "wide receiver heaven" as he called it. Sanders' move means he'll be catching passes from a better quarterback in a more pass-heavy offense. Sanders will also benefit from the fact that he is just one of many legitimate targets in Denver; teams keying in on Demaryius and Julius Thomas, as well as Wes Welker will allow Sanders opportunities to get open and catch a lot of passes from Peyton. Sanders has reportedly impressed Manning, other teammates, and media members in OTAs and mini-camp and he appears poised to have a breakout season in Denver. Sanders is an ideal pick in the sixth round of your drafts, but again his stock will improve in PPR leagues. If you want to guarantee Sanders' membership on your team (unlike the Chiefs and 49ers...) you'll have to be willing to use a fifth round pick on him.

Fantasy players beware. Wes Welker has gone from being a fantasy sleeper, to fantasy stud, to fantasy question mark throughout his career. When healthy, Welker still put up solid numbers in 2013, but he was injured multiple times, leaving fantasy owners scrambling for replacements. Welker once was a number one/two receiver in fantasy, but should be considered more of a low-end two, high-end third receiver for your team in 2014. I'm very prone to staying away from injury-prone players, though, so if you have faith that Welker can stay healthy, feel free to pick him as early as the seventh round of 10-12-team leagues.

The second-round pick out of Indiana will be a productive member of the Broncos' offense in years to come; however, he's not worth a pick in fantasy this year unless you are in a very deep league. Latimer will be available on the waiver wire if one of the other Broncos receivers you drafted go down with injury, in which case you should jump on him as soon as possible. If you've got a spot on your bench that you don't know how to fill, pick Latimer in the late rounds as injury insurance on a guy like Welker or Sanders.

One of the Broncos' other tight ends is Virgil Green. Here we scout the former Broncos draft pick with the help of a former NFC scout.

Tight end is a position that has another huge drop-off in talent level after the first tier of players is gone. There are a few select tight ends that can replace a receiver in your lineup, and Julius Thomas is one of those special players. Thomas will face some tougher coverage in 2014, but he also has another year of experience under his belt and he should be able to duplicate his production from 2013. It's also a contract year for Thomas, if the Broncos don't sign him this offseason first. If you value having a great tight end, Thomas is a good pick in one of the early rounds; if you'd rather wait on a tight end and draft other positions first, you'll likely miss out on the Denver tight end.

The additions of T.J. Ward, Demarcus Ware, and Aqib Talib, as well as healthy returns for Von Miller, Chris Harris, Rahim Moore, and Derek Wolfe should make the Broncos one of the best defenses in the league. Because they haven't played a game together yet, the unit is unproven, but look for the new additions to make a big impact on the Broncos' defensive play in 2014. Trindon Holliday's exit may mean fewer return touchdowns on special teams, but it should also mean less points lost due to fumbles. In most drafts, expect the Broncos defense to be third or fourth off the board once the first defense is selected. Once the Seahawks and 49ers are off the board, the Broncos should be taken shortly after, so keep that in mind if you're interested in picking them.