Last off season I scouted a number of players entering their 4th, 5th and 6th seasons. It was popular, so I wanted to continue this series during the 2014 off-season. Many of these players are commonly discussed, but we too often misunderstand what type of players they are now. While few players make big strides in years 1-3, by a player's 4th year they should have progressed in a number of areas. With that mentality I wanted to approach my study of these players like an NFL scout would a rookie, looking back on the most recent season's game film and then write up a scouting report. By doing this I feel the Broncos fan base can create a more up-to-date picture of what these players strengths and weaknesses are instead of relying on what we remember from their early careers.

I'm going to be using the CBS Sports player profile outline, since it's so robust and even used by NFL.com now. They break the players skills into a variety of categories and then give them a score for that category by looking at every snap they play. For each player I'll try and do my scouting with either a member of an NFL team staff or a someone from a reputed scouting site. Our method is straightforward with me watching every game and snap while my partner does this separately. Then at a later date we watch two to four games together and compare notes. Following this session we assign a score for a variety of categories depending on the position. For example the average NFL starter at any position will be a 7, a 9 would be a Pro Bowl or All-Pro level player while an 8 is a very or above average starter. A 6 is an area of concern while a 5 is likely reason to be benched. This is a methodology I started two years ago and which I first used last off-season while working on perfecting it these past few years.

Could the Broncos already have an answer at middle linebacker in Nate Irving?

For this study I was extremely blessed to work with Eric DeKenn of the New Orleans Saints, where he helps coach their defensive backs. This is not his scouting report since that would be inappropriate but he did assist me in my film study.  As always I wish I could include more clips but since these articles are so long anyways, including more than one or two plays would only increase the length. Because of this I almost always try and include a positive play by the player rather than a negative one.

*This isn't a predictor of future success. It's an assessment of their ability currently; it's how they performed in the past.*

Athletic Ability: Harris is a quick player with very loose hips, quick acceleration and decent straight line speed, Harris has all the agility needed to play corner. Harris' biggest issue arises with his size. Due to his small frame and stature Harris can very easily be handled by bigger receivers or tight ends. This became apparent right away on the 1st drive of the season against Baltimore when Harris gets laid out by the Ravens receiver Jacoby Jones and it was a constant trend throughout the season. His height and average leaping ability also hurts him against tall receivers who were able to out jump him. Now having said that, Harris is quick to recover and on the specific play I mentioned against Baltimore he got up so fast that he was able to make the tackle. To compensate for his weaker frame he smartly uses his momentum as he wraps up, we'll talk more about this in the tackling section.
GRADE: 7.0

Football Sense: Harris's ability to watch the quarterback is quite excellent and it pays off consistently. His skill at reading quarterbacks is quite strong which is one reason Harris excels in the slot so well, it allows him to make plays across the field more easily. He also has a strong sense for sensing rushing lanes and flying to them. The only issue Harris has in terms of football sense is field awareness, while his strength lies in watching either the quarterback, receiver or running back, when he's facing a quarterback with a strong pump fake (like Eli Manning or Andrew Luck) or highly cerebral QB's who know how to manipulate defenses (like Philip Rivers or Tom Brady) he can get into trouble. This is one area Del Rio's scheme did Harris no favors, especially when Harris played on the outside, the amount of zone Del Rio called really hurt Harris' ability to read the better QB's in the league since Harris is at his best when he can sit inside and watch the QB or when he can keep his eyes on just one receiver, when he was forced outside into a zone he struggled and we saw it against the better QB's in 2013. I spent more time writing about the negatives because they required more explanation but overall Harris is a very intelligent corner.
- GRADE: 8.4

Read & React: Harris has excellent reflexes, rapidly adjusting to what he sees from the quarterback or from the receiver he is shadowing. Perhaps his greatest strength, he rarely makes mistakes in man coverage and in zone his ability to track most quarterbacks eyes and follow the play as it develops. Harris was also the best defender at any defensive position when it came to not biting on play action passes, while you'd see most of the defense (sans Harris and DRC) fall into the fake run, Harris would consistently stick to his man or his zone. The only issue arose as we mentioned before, top quarterbacks can trick him with a strong pump fake when he is in zone. This is more of an issue when he plays deep zone in the Broncos Cover 3 defense but is almost non-existent when he plays man.
- GRADE: 8.3

Man Coverage: Of the two types of coverage, this is by far the one I prefer to see Harris in, he has quick reaction to receiver movement, not getting thrown off by a hip shake or juke, and he has the speed and agility to keep up with some of the best wide receivers in the league for the most part. He has the skill to keep his eyes quickly moving between the receiver he is covering and the quarterback. Overall, of the players I've scouted Harris does man coverage better than anyone on the Broncos in recent years, he's a better man coverage corner than Champ Bailey has been the past two years and was on par or better than DRC as well.

Let's take a look at one of Harris' best plays against Baltimore where he intercepts Joe Flacco. This play highlights his speed, burst and intelligence covering one of the more clever slot wide receivers in the NFL, former Bronco and Colt, Brandon Stokley (For this and all film breakdowns red indicates what the opponent is doing while blue shows what the Broncos are doing). 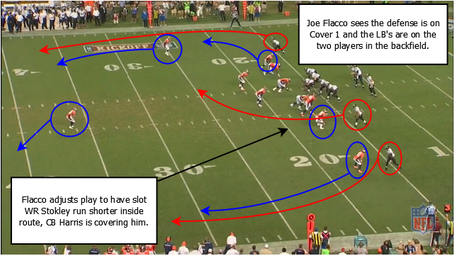 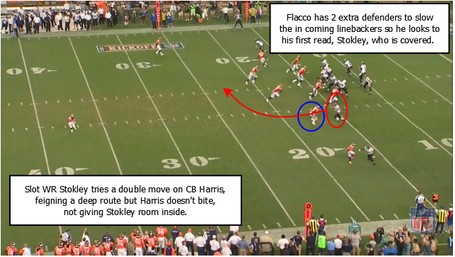 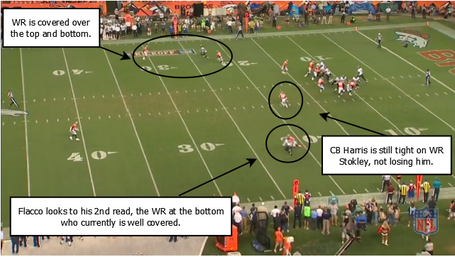 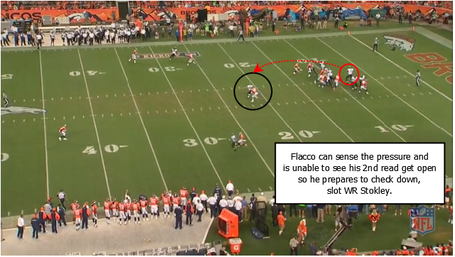 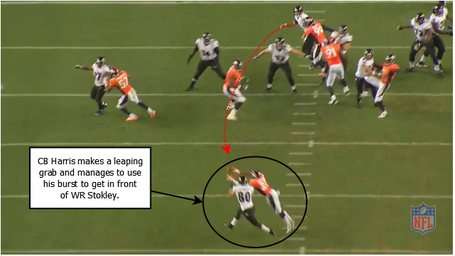 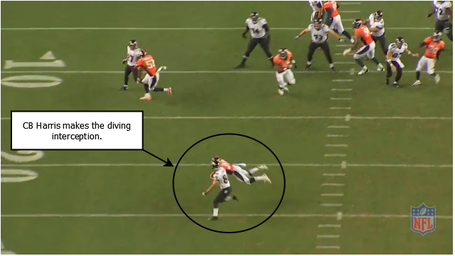 Harris shows exceptional understanding of what the offense is trying to do, shuts down Stokley from the get go and then punishes Flacco for getting flustered under pressure.

Zone Coverage: For all the praise of Harris, there is one area where he struggled in 2013. Defensive coordinator Jack Del Rio liked to run a lot of deep Cover 3 with Harris as one of the men dropping into those zones and that is when Harris struggled. While he was solid he lacked the field awareness to keep track of what was going on in his zone, he'd either lock onto one receiver and naturally fall into man coverage (two teams in particular used this against him by running deep scissor routes when two receivers would cross the zone at the same time and Harris would just follow one rather than sit in his zone and watch the quarterback) or he'd ignore any receiver that entered his zone and just follow the quarterback, which against the average passer was fine but against more talented quarterbacks Harris was targeted. Again, for the most part Harris played well in zone but was exploited by the better quarterbacks in the league when he was forced to make a decision.
- GRADE: 7.0

Closing/Recovery: I won't go too deep into this one, due to his speed and acceleration Harris rarely is cannot catch up to a receiver if they beat him, though some of the faster ones can escape him (the Giants were a team that always tried to line up a fast wide receiver on Harris' side to some success) but those were more the exception than the rule. He also has exceptional closing speed, rapidly attacking the play and is one of those players you'd always see around the play even if he wasn't the man making the tackle.
- GRADE: 8.1

Run Support: Another area that is hurt by his size, but Harris makes up for it with great tackling form and smart use of his momentum to compensate for a slighter frame. He's also not afraid to contribute in run support, rarely shying away from contact, even with bigger backs (his help tackling Trent Richardson in the Indianapolis game is a testament to this). He has the vision to see rushing lanes and when he sees it's a run he quickly moves to them behind the linebackers to assist with the runner, almost always taking the correct angle so as not to be caught flat footed.
- GRADE: 7.1

Tackling: What should have been a problem area for a player his size he made up for it with good, wide tackling fundamentals. While not always consistent, he usually uses a low, open armed tackling approach which causes him to rarely miss tackles. Also by going low, either to the thighs or waist, he can gain leverage against players who are much bigger than him. Though when he did lose his tackling form (which did happen a few games) it showed, both against Indianapolis and New England we saw Harris revert to trying to make the big hit with his shoulder or head rather than wrapping up and he had five missed tackles in those two games alone. But for the most part he avoided these basic mistakes and was excellent.
- GRADE: 7.7

A technically sound and intelligent corner who excels in the slot, Harris is the pinnacle of the new developing slot corner position, smaller corners who have smooth hips and quick reaction times that can shut down those short passes that have been on the rise in recent years. Harris' size does impact his ability outside and that is where he struggles most, against bigger wide receivers who can push him around and then head up field. Luckily Harris is the designated slot corner when there are 3 or more receivers.

If Chris Harris has recovered from his injury and is back to his old form expectations are high, he's one of the best at his position, I'd rank him as a top three slot corner but a case could be made he's the best in the league at what he does.