Sam Monson, a writer over at Pro Football Focus, came out with a story on ESPN.com this week analyzing the roster strengths of all 32 NFL teams. For all the disrespect the AFC gets and how much fans of the NFC teams love to lump the Denver Broncos in with the rest of the conference, PFF sees the Broncos roster as one of the elite rosters in the NFL and they are the only AFC team to be represented in the Top 5 on their list.

Click the link above to understand their color coding, but essentially its blue for "elite", dark green for "high quality", light green for "good starter", yellow for "average", orange for "below average" and purple for "rookie". 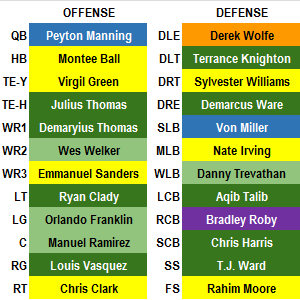 The Broncos were blown away in the Super Bowl, and with Peyton Manning perhaps in the twilight of his career, they set out to re-tool this offseason, adding several big-name players to a lineup that was already strong.

There aren't many holes to this roster, and adding guys like T.J. Ward, DeMarcus Wareand Emmanuel Sanders in free agency allowed them to use the draft to concentrate on depth.

Bradley Roby is a question mark likely to be thrust into the lineup as the third corner, but ESPN draft expert Todd McShay called him "maybe the most physically gifted corner in this class", and he will be surrounded with talent to take the pressure off. Injuries in the past have resulted in their secondary having good depth, so even if Roby does struggle early, they have players they can bring in to pick up the slack.

By the numbers: An impressive 58.3 percent of their projected starters are graded good or better, with only a lone player (Derek Wolfe) below average. Manning and Von Miller are the obvious blue-chippers among the starters, but if Ware can recapture his best form he could join them there.

I think I can live with Derek Wolfe being the weakest link on the team. Some fans are really high on him, but unbiased observers do not seem to think he is a very stout defensive lineman.

The Seattle Seahawks and San Francisco 49ers top the Broncos above the list, with the New Orleans Saints and Philadelphia Eagles rounding out the Top 5, however, there does appear to be a significant talent drop between the three teams at the top and the rest. Case in point, the Kansas City Chiefs sit at the 10th position, but they have six "below average" starters and one "poor" starter.

Being closer to the Broncos than anyone over at PFF, I feel like they are better than the 49ers and pretty close to even with the Seahawks now, however, I understand why there is doubt outside of Broncos Country. Peyton Manning and the Broncos have much to prove this season and quality wins over these other elite teams will go a long way towards dispelling that doubt.

What do you think of the Broncos ranking here?