There's something different about this training camp.

Maybe it's the way the defense is already keeping up with the offense - the way Omar Bolden punched out a football to force a fumble or Kayvon Webster put himself in perfect position to knock out a pass intended for Julius Thomas. It's a rare occurrence, in my experience at training camps, to see the defense keeping up with the offense on Day One, but that was the case as the Broncos broke camp on Thursday.

Perhaps the difference in this year is related to the lingering effects of a 35-point Super Bowl loss, which has yet to manifest itself in a glaring fashion, but that one player, Terrance Knighton, admitted was still on the back of his mind.

Or maybe it's the enormous empty hill where thousands of Broncos fans should be.

This camp is unlike any I've ever seen because Broncos fans are nowhere to be seen. Even on a hot and sunny Thursday morning, no fans at Broncos camp shed a dark cloud over the practice.

"I really missed the fans today and I know we are going to miss them all training camp," quarterback Peyton Manning said after practice. "I like having the fans out here during practice. Especially when you get into that third or fourth padded practice and it's kind of the dog days of training camp, those fans lift you up."

38 photos from Day One of camp

38 photos from Day One of camp

Fans will be able to attend the first stadium practice on Sunday, but the sessions at Dove Valley are closed to the public due to construction.

"Our guys are probably more disappointed about it than anybody, maybe even the fans," head coach John Fox said.

On the field, the Broncos participated in a no-pads, no -contact practice that saw Julus Thomas step up in Demaryius Thomas' absence and rookie Cody Latimer use his big, tall frame to make a handful of plays.

Peyton Manning... what is there to say that hasn't already been said? "He never ceases to amaze you," Fox said, when he was asked the same question.. Manning was sharp and looked as good physically as he did last year. Nearly every one of his passes was completed, and every one of them was on the mark.

Brock Osweiler had a rough practice, with the swarming Broncos defense regularly leaving him no options in team drills. He threw an errant pass behind Jacob Tamme in team drills that got snatched up by Louis Young; the undrafted rookie took the out-route interception to the house. Zac Dysert had a decent practice, while rookie Bryn Renner got into my notebook by being the first player out on the field for training camp in 2014.

It was a non-contact practice, meaning there wasn't a lot to scout at the running back position. Of note was the positioning of C.J. Anderson, who found himself behind Montee Ball, Ronnie Hillman, and rookie Brennan Clay in first-team reps. It's still very early though, and Coach Fox likes to give guys opportunities. I liked one Anderson run that broke to the second level - Anderson kept his knees pumping all the way to the end zone - and I liked the look of shifty first-year back Jerodis Williams.  This is a wide open competition for the 2-4 spots; we'll see it warm up as the pads come on.

Julius Thomas dominated most of the practice, becoming Peyton Manning's favorite and most reliable target in the absence of Demaryius. He was able to get past Rahim Moore for a touchdown in one-on-one's while making a lot of tough grabs in traffic. He also, somehow, got wide open a handful of times. His routes are seamless, and he looks even better than a year ago.  Both Virgil Green and Jacob Tamme lined up with the one's as needed, with Green getting more snaps with that unit. He looks good, but not Julius-level good yet. Jameson Konz has an awesome mountain man beard that would make Jake Plummer proud.

With Demaryius Thomas excused, Andre Caldwell took over starting duties. Caldwell didn't wow me; I still have concerns about his route-running and his smoothness in his breaks, but he had a solid day with several catches. Manning looked his way several times in seven-on-sevens and full team drills. Also mildly disappointing was Emmanuel Sanders. He dropped a pass his grandma could catch (his words) and graded himself "below an F" for it, saying, "I don't take dropped passes lightly. Danny Trevathan was able to break up one pass intended for Sanders in 7-on-7's as well, but those few bad plays shouldn't dim his higlight: a beautiful, deep touchdown grab from Manning against Tony Carter in one-on-one work.

Latimer is an impressive specimen; granted, it's one practice, but I'm having trouble tempering my excitement about the rookie.

The most impressive performance from the wide receiver group came from rookie Cody Latimer, who made the Play of the Day by catching Brock Osweiler's deep touchdown pass over Carter and  Duke Ihenacho in team drills. Latimer is an impressive specimen; granted, it's one practice, but I'm having trouble tempering my excitement about the rookie. He used both his height and his size to his advantage throughout practice, leaping for high footballs and muscling his way against defensive backs to haul in the football in a tight window.

Again, not a lot to talk about, since it was a non-contact practice. From left to right, the Broncos lined up as expected: Ryan Clady, Orlando Franklin, Manny Ramirez, Louis Vasquez, and Chris Clark. I saw no effects of Clady's knee Lisfranc foot injury; he bent and sidestepped with seeming ease.

There were a handful of "sacks" throughout the day (I'll talk about them next)... most of the time you can't really tell if an offensive lineman failed on a play or was just taking it easy without pads, but there were a few occasion where the OL-man gave it away by cursing at himself after his quarterback's three-foot can't-touch-me bubble got brushed against. I saw Aslam Sterling and Winston Justice guilty of such admissions.

The theme of the day was pressure, and the Broncos caused a lot of it - even without Von Miller in team drills. DeMarcus Ware showed his explosive speed on one would-be sack of Manning, while Malik Jackson was able to get to Brock Osweiler on another series.  As I noted above, without pads it's hard to gauge this position (especially defensive tackle), but I can't help but be excited for this defense's ability to cause pressure in 2014.

Outside of a few Danny Trevathan plays and a "sack" by Lerentee McCray, I didn't take a lot of notes on linebackers today. Before you ask, and I know you will, Nate Irving didn't stand out in any good or bad way. It would be hard for a middle linebacker to do so sans contact - it was hard for any of them to do so. Hopefully more to report in the days ahead for both linebackers and running backs (and in the trenches) as the pads come on. 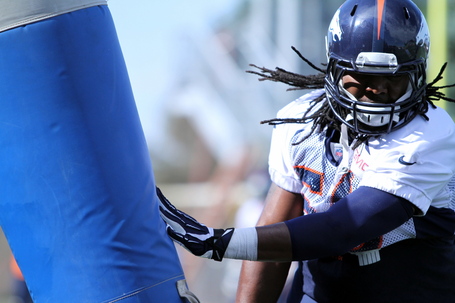 I had trouble about where to begin in this segment. Do I start with the relative improvements displayed by Omar Bolden and Kayvon Webster? Do I talk about new acquisition Aqib Talib or the struggles of Tony Carter?

No, let's start with the guys I hardly knew entering training camp.

The first is fifth-year cornerback Jerome Murphy, who utterly dominated one-on-one's. He was fast, physical, and in perfect position every snap but his first.

The next is undrafted rookie Louis Young, who basically had two touchdowns. The first was a pick-six off a slightly errant Brock Osweiler throw. The pass went just behind Jacob Tamme, who should have batted it down, and Young was able to leap behind him, haul in the interception, and run down the sideline untouched to paydirt. The second was the recovery of a fumble forced by Omar Bolden. Neither displayed particularly athletic prowess, but both displayed keen awareness.

Webster and Bolden both had good practices, and it was exciting to see the Broncos potentially reaping rewards from the talent they've been pooling in their secondary reserve. I'm looking forward to continuing to watch them. Bradley Roby has the makings of a solid cornerback, he just didn't make any/many plays today, and Latimer got the better of him in two of their three matchups.

T.J. Ward asserted himself as the best safety on the roster pretty quickly, and that was even without any of the hard-hitting he's known for. He was able to keep up more consistently in coverage in one-on-one drills, and in team drills I didn't see a negative blip. Rahim Moore had a decent day as well; he got beat by Julius Thomas on one play, where he claimed the tight end illegally pushed off and was begging the ref for a flag (yes there were practice refs today). No flag came, so Rahim made up for it on his next snap against Julius, smothering him and breaking up a pass.

After four footballs, Sanders found that he couldn't secure all the footballs in one arm, and struggled to figure out what to do. As the fifth punt came soaring toward him, he tossed one of his footballs straight up in the air, with the intent to catch the punt, then catch the much lower-velocity ball he just tossed. It didn't work out, as Sander couldn't haul in either of those balls (they went tumbling in different directions), but it was a fun exercise in ball security for Denver's potential punt returner.

The Broncos have a walkthrough at 5:30 p.m. Mile High time Thursday night. The next full practice is 10:25 a.m. - 1:05 p.m. Friday. Both Kirk and I will be there, so you can expect a double camp report tomorrow!

I've collected a couple of quotes as separate updates in the story stream, but this quote from Terrance Knighton on the first day of camp is choice.

"I look forward to Day One," Knighton said. "When Day One comes, you know the end is coming.  The quicker Day One gets here the quicker the end gets here."

In other words, the quicker real Broncos football gets here.