One week of Denver Broncos training camp is in the books, so let's look at this year's surprise stars of training camp.

As Broncos fans prepare for and preview training camp, we're naturally inclined to focus on two groups of players: those we expect to be starting contributors - the Peyton Mannings, the Von Millers, the Ryan Cladys - and those we expect to be competing in one of the many position battles.

Yet every year, something remarkable happens. From the deepest layers of the depth chart, borne of competition and driven by the prospect of being unemployed in 40 days, stars emerge.  Unheard-of Broncos players find themselves into our notebook, and then into our practice reports, and into the conversations of passionate Broncos fans everywhere.

This year is no different, with a mix players from various backgrounds emerging into the orange and blue limelight that weren't thought of to be big contributors in 2014 heading into camp.

These are my six surprise stars of training camp - players who have exceeded expectations - as judged the best way I know how: with my own two eyes.

From the rookie ranks comes Louis Young, looking to follow the Broncos' undrafted legends of Rod Smith and Chris Harris.

Being part of three takeaways in two days of training camp is a quick way to get you noticed, and Louis Young - an undrafted rookie out of Georgia Tech - did it with seeming ease. Young notched two interceptions and a fumble recovery in the first days of training camp, and he didn't do too bad in the individual work I saw either. A 6'1", 196 lbs. former Maryland Defensive Player of the Year in high school, Young was looking to follow the path of Broncos cornerback Chris Harris Jr., another undrafted cornerback who took the Broncos by storm starting in his rookie year.

The buzz around Young has quieted some since his initial storm, knocking him down a few notches on this list. Furthermore, he was injured in practice Wednesday, a groin injury that may leave him limited for a few days. We're eager to see Young get healthy and practicing again, hopefully in time to participate in the Broncos-Seahawks preseason opener, because that's his best chance to regain the momentum he had early in camp and land on this roster or practice squad. 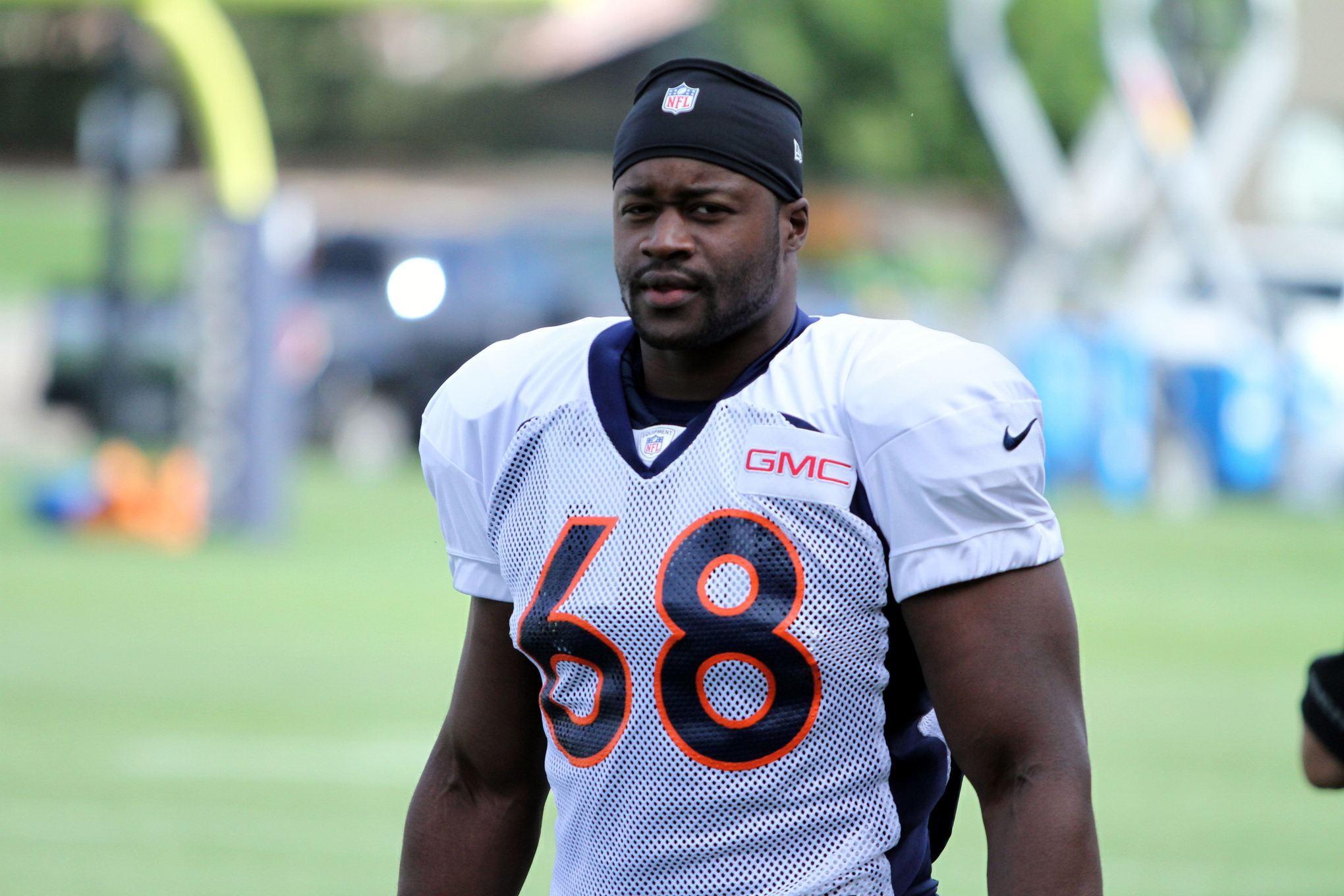 While many people have been eager to hear how Quanterus Smith has fared, it's been Kenny Anunike who has had a better camp, making him one of  the event's biggest surprises. The undrafted rookie out of Duke seems to be getting better as training camp moves along, notching at least one sack or pressure in each of the last four practices.

Kenny Anunike keeps shining. Dominated his one-on-one work, then had a sack of Osweiler set up by Marvin Austin's pressure from the inside.

Anunike totaled 148 tackles and 15 sacks in college, starting all 14 games as a redshirt senior in 2013, and is described as a "vocal leader" by the Duke athletics website. He's putting his money where his mouth is so far, getting the better of Winston Justice repeatedly and pushing Smith on the depth chart.

Kayvon Webster was teetering on this list as I was writing it last night, but a very impressive performance on Wednesday in a rainy Sports Authority Field stadium solidified his position. A pick-six of Peyton Manning will do that after a number of other decent-to-strong practices.

Webster doesn't just look better in coverage this year; his physicality is an element to be feared. He boasted one of the biggest hits of camp when he slammed Montee Ball in the middle of an attempted reception a few days ago. Right now he looks firmly entrenched as Denver's third cornerback on the depth chart.

From the dredges of the Broncos' depth chart to seeing snaps as first team defensive tackle, no one has moved so quickly up their rotations as fourth-year defensive lineman Marvin Austin. Austin has only played in 11 career games in his time with the Giants (2011-2012), Dolphins (2013), and Cowboys (2013), but he's becoming a key cog in Denver's defensive line through the first week of training camp. The Broncos' website even reported Austin broke up "four or five run plays" in one practice and beat "many different lineman" in individual pass rush drills. It's a potentially revitalizing revelation for the former second round draft pick, considering how disappointing his NFL career has been thus far.

Whether it's assisting Williams or Anunike, getting after the ballcarrier, or applying pressure to the quarterback himself, Austin has shown to be a shrewd, low-risk, high-reward signing for the Broncos. A former North Carolina Tar Heel - just like the Broncos' 2013 first round draft pick and fellow defensive tackle Sylvester Williams - Austin is someone we'll be watching extremely closely in the preseason.

On the second day of training camp, Sylvester Williams delivered a play that one teammate called "Sportscenter Top 10 material."

Expectations for the Broncos' first round pick a year ago weren't low by any means, but that doesn't mean Williams hasn't exceeded them.

In fact, he looks poised to shatter them. Williams has boasted some of the most athletic, impressive plays of camp to date, an encouraging development for a player entering his second year at a tough position to play in the NFL. Twice he has leaped to bat down a Peyton Manning pass at the line of scrimmage - once resulting in an interception a teammate called "Sportscenter Top 10 material." He has also applied pressure and gotten inside on the Broncos a handful of times. Finally, at the first stadium practice Saturday, I saw the 313-lbs. Williams run down the 215-lbs. Montee Ball over five lateral yards to tackle the running back for no gain, showing incredible speed for a man that size.

But it isn't just his physical presence that impresses. Williams is much further along mentally. "I feel a lot more comfortable this year," Williams said. "I know my plays, I know what’s going on, and I know the defense. I know what the offense is running now. I'm able to work through the kinks and able to read my keys. Pre-snap I'm able to get off the ball and I’m able to read blocks better than I did last year."

Cody Latimer shines on Day One of training camp

Cody Latimer shines on Day One of training camp

Cody Latimer has dominated training camp practice reports since Day One, when he burst onto the scene with multiple touchdowns, including a beautiful 40-plus-yard strike from Brock Osweiler. Those reports have continued throughout camp. Long, deep touchdowns from both Brock Osweiler and Peyton Manning have peppered training camp reports throughout the first week, and they didn't slow down Wednesday either, when Manning found Latimer deep between Bradley Roby and Rahim Moore.

Wide receiver is notoriously one of the most difficult positions to find success in one's rookie year, so the reports of Latimer's early gains are a big surprise. No matter who he is lined up against, Latimer seems to find the edge - and the football.

At this point he is clearly pushing Andre Caldwell for the #4 wide receiver spot on Denver's depth chart. If he impresses during the preseason, he could even steal snaps from free agent wide receiver Emmanuel Sanders. Latimer has looked that good.