Horse Tracks: The other OTHER Mile High Stadium

It's early July. Nothing Broncos related is happening and that's a good thing. No arrests. No executives crashing into police cars. All is quiet. So rather than scour for obscure articles on how Brock Osweiler spent his 4th of July, I thought now would be a good time for a little history lesson. Lots of people know about old Mile High Stadium (formerly Bears Stadium), but few know that there was another stadium that the Denver Broncos called home. Say what?! Allow me to introduce you to Hilltop Stadium.

Share All sharing options for: Horse Tracks: The other OTHER Mile High Stadium

After the University of Denver alumni raised $571,000 selling public bonds, construction of Hilltop Stadium began in 1925. Located where the Stapleton Tennis Center now stands, Hilltop Stadium was home to DU Pioneers football from 1926-1960. One of the biggest draws at the stadium was the biannual Thanksgiving Day showdown with in-state rival University of Colorado, which ended in 1948 when CU joined the Big Eight. From 1955-1961, Air Force played their games there as well.

For a time, Hilltop Stadium was the major stadium in Denver. When Broncos founder Bob Howsam built Bears Stadium (what would become 'Old' Mile High) in 1948, it sat only 18,000 while Hilltop could accommodate nearly 30,000 fans.

In 1960, the University of Denver scrapped the Pioneers football program and the stadium sat until 1971 when it's crumbling concrete structure was torn down.

So why haven't you heard of Hilltop Stadium?

The Denver Broncos only played 11 preseason and two regular season games there in the early to mid-1960s. At the time, the Broncos weren't the big sporting draw, the Denver Bears Pacific Coast baseball team was and so preference was given to them. That left the Broncos with no place to play... enter Hilltop Stadium.

Little do most people know, one of the most storied games in Broncos and NFL history took place at Hilltop. On Aug. 5, 1967, the Detroit Lions and the Denver Broncos met in the very first match-up of AFL and NFL teams in a preseason game following the merger. 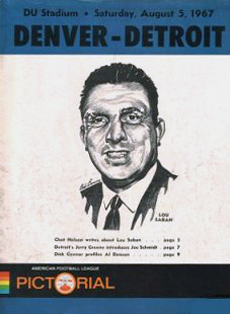 In the summer of 1967 the Broncos couldn't even get into Bears' Stadium to play the Detroit Lions because there was a minor league team scheduled for a baseball game that week.  The Broncos played in the old concrete stadium at the University of Denver.  It hadn't been used for football for years.  I wondered at the time where the players had space to dress.  In any case, the Broncos won the game and became the first AFL team to beat an NFL team. Despite the fact that it was "just" a preseason game everyone there had realized how important it was.  It was amazing that there were only about 4-5 thousand of us there to watch.  I sat behind the Lions' bench and heard the player cat calls against the Broncos.  Alex Karras kept yelling about how bad the Broncos were and finally got tossed from the game for fighting.  Floyd Little ran around and over Karras and the other Lions for the whole game.

Prior to this game, Karras had stated that if the Lions lost, he'd walk back to Detroit.  Good thing he was tossed from the game so he could get a head-start up I-25.  The Broncos won, 13-7.

Although Hilltop doesn't leap from the tongue when discussing the stadia the Denver Broncos have called home, it does deserve mentioning and not just for the Alex Karras history. 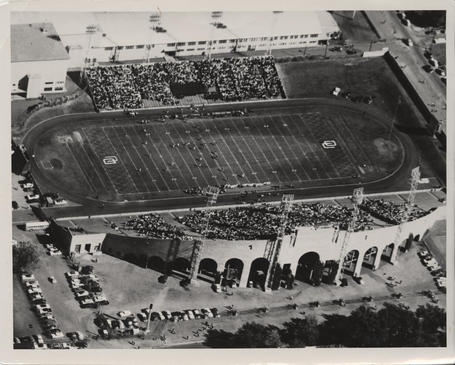 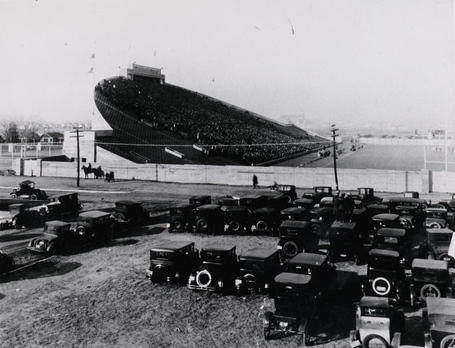 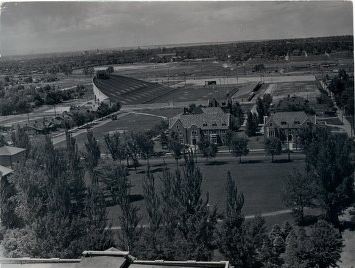 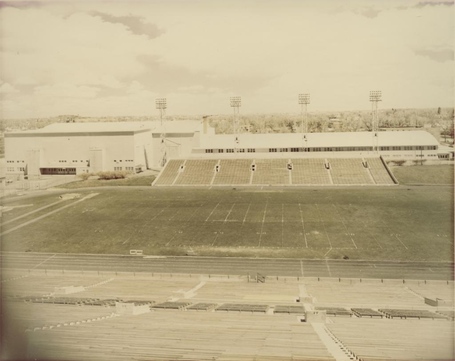 It kind of looks like a sinking ship if you ask me. Seriously though, who cares what it looked like? The Broncos called it home and that's good enough for me.

Special thanks to the University of Denver's archivist Steve Fisher and Director of Media Relations Nicole Bostel for their help writing this article and their kind permission to use the materials herein.