The shape of the Denver Broncos' good running game

We know that the front office and Peyton have talked about having a "better" running game in 2014, but what does that mean? To understand what that means we need to know how we did last season running the ball and compare that to teams that were the best running teams in the NFL last season.

Share All sharing options for: The shape of the Denver Broncos' good running game

The easiest answer to that question is "The 1998 Denver Broncos", but I hope to go deeper than that.

Even a casual football fan knows that the Broncos could not run the ball in the Super Bowl, and this (among other things) led to the blowout. Elway knows the value of a running game to an aging QB from personal experience. To that end, the Broncos are supposed to be more run-oriented in 2014 than they were in 2013. In 2013 our run/pass split (plays, not yards) was 39.9% (11th worst in the NFL). The Falcons ran the ball with the least frequency (because their running game was horrible) at 31.4% while the 49ers ran the ball most frequently at 52.6%.

First let's look at what our RBs did on an individual level (graphically) in 2013. Graphed below are the outcomes (distances) of runs by our running backs in 2013. Bear in mind that there is no weighting for runs that ended in a  first down or TD (click to expand graph). 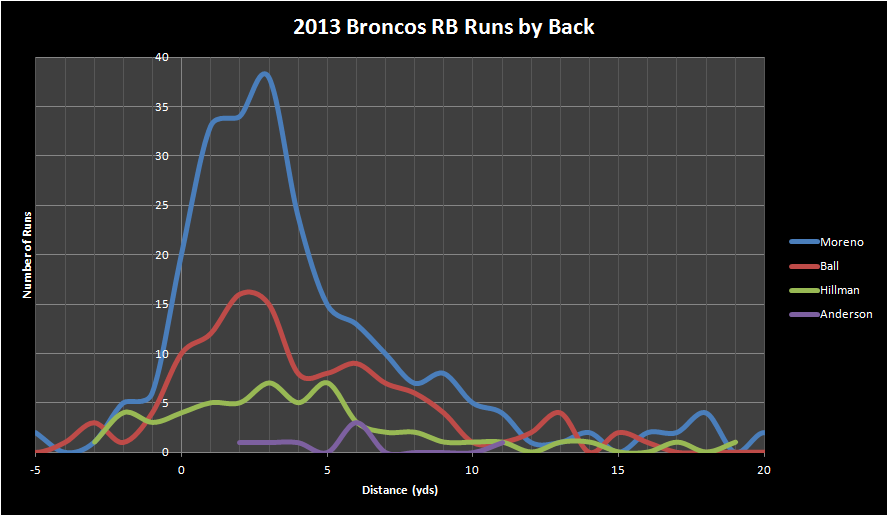 I have used a smooth curve (in the comments I can provide the tables from which I made the histograms, if you want them) to make it easier on the eyes, but there should be a few things that jump out to people when they look at this. The average run in the NFL last season was 4.17 yards. In terms of average Moreno got 4.3, Ball 4.7 and Hillman 4.0 (CJ got 5.4, in very limited carries). Obviously we want those curves to have as little as possible area on the left side of zero and we want the area on the right hand side of 4 to be as great as possible (runs that went for more than the NFL average). The Broncos were actually quite good at not getting stuffed on runs last season (a "stuff" is run for zero or negative yards). We were 7th best in the league at NOT getting stuffed (only 7.4% of runs).  Hillman had a disproportionate amount of 0 and negative yard runs. Moreno and Ball both had a lot more 1 yard runs than I would like. Ball was much better than Moreno in terms of runs in the 5-10 yard range. How would Ball's curve look if he had the same number of carries as Moreno? - see below 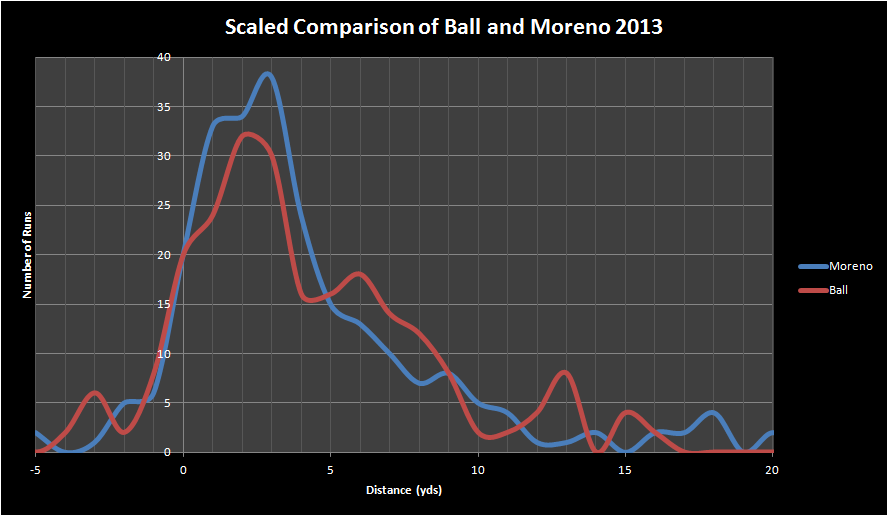 The key difference here is that Ball would have broken off many more 5-9 yard runs in the same number of carries as Moreno. I would be an interesting exercise to remove Moreno's runs against NE in Foxboro and see how his histogram compares to Ball then. Short of doing that, I will say that Moreno had 25 runs of 7 or more in 2013, 13 of them (more than half) came against NE in the regular season. So Moreno's chart would look really poor in the 7 and above range without the NE game in Foxboro.

So how did Moreno's graph compare to an elite RB? Well the best RB last season was arguably LeSean McCoy. Below is a comparison of McCoy and Moreno (again looking only at runs of 20 or less). See below 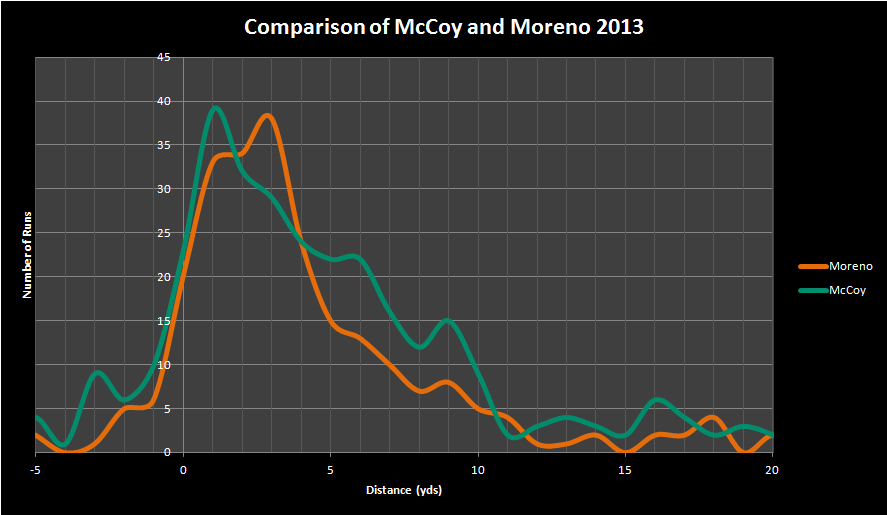 While Moreno had significantly fewer negative yardage runs and 1 yard runs, McCoy blew him away in terms of runs that went for 5-10 yards and then absolutely destroyed him in terms of 10-20 yard runs. McCoy's graph is what an elite running back looks like. McCoy definitely made the most of his runs in 2013 (averaged 5.1 ypc) while Moreno really didn't, at least not on an elite level. GM's around the league realized this and hence Moreno was only able to land a paltry contract with the Fins. Remember that Moreno and McCoy were both drafted in 2009, KnoMo was the first RB taken (12th) while McCoy was the 4th RB taken (53rd). 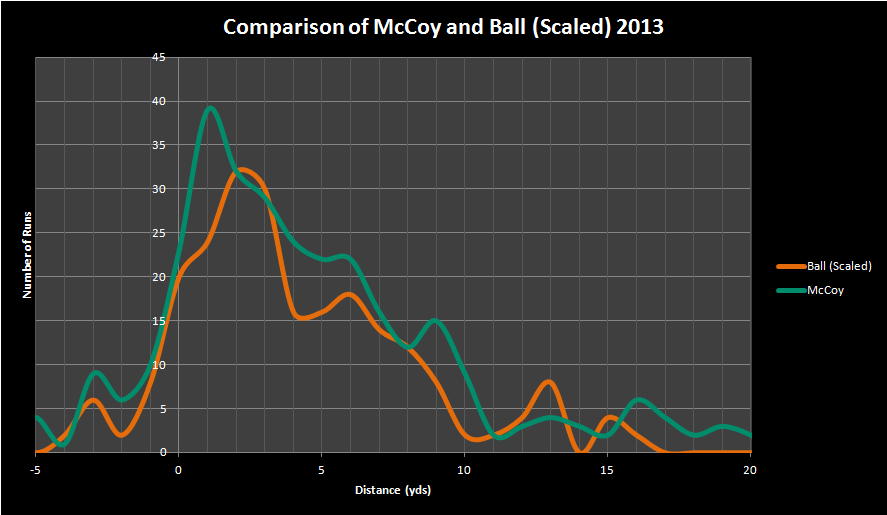 I'm going to compare the team run distance charts of the Broncos to three good running teams from 2013 (SF, SEA and PHI) and two poor running teams (BAL and ATL). SF had the highest run/pass play ratio. SEA had the second most runs (BUF was first but their ypc was 14th in the league). PHI lead the lead in ypc as a team. BAL was the worst team in the league in ypc. ATL had the fewest rushing yards and their ypc was poor as well - 24th.

Let's start with the teams that made the Broncos look good. 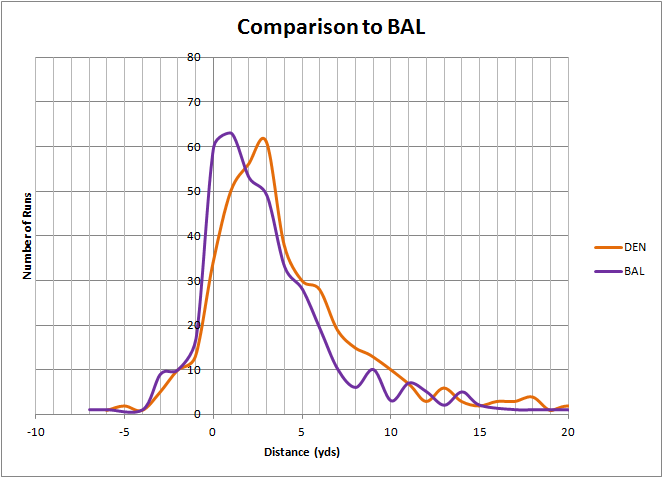 Baltimore had a huge number of 0 and 1 yard runs last season - more than double the Broncos total of 0 yards runs. The Broncos also bested them at just about every run distance. 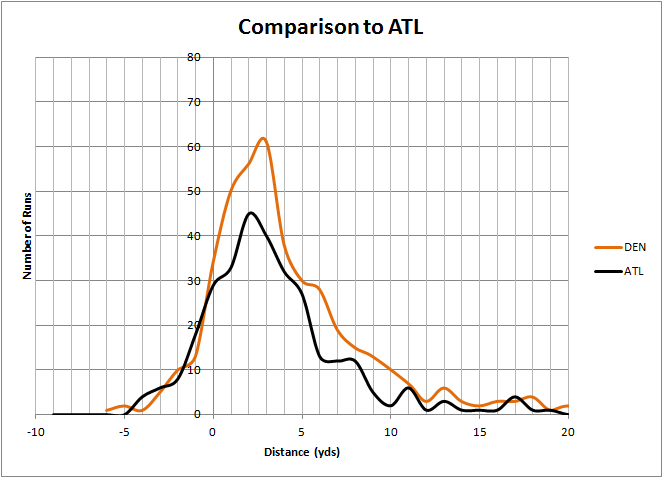 The first thing that should jump out at you here is how few runs the Falcons had. Similar to the comparison with the Ravens, the Broncos bested the Falcons at almost every run distance. So those two graphs above show us how the Broncos compared to the two worst running games in the league. Let's move on see how we compared to three of the best. 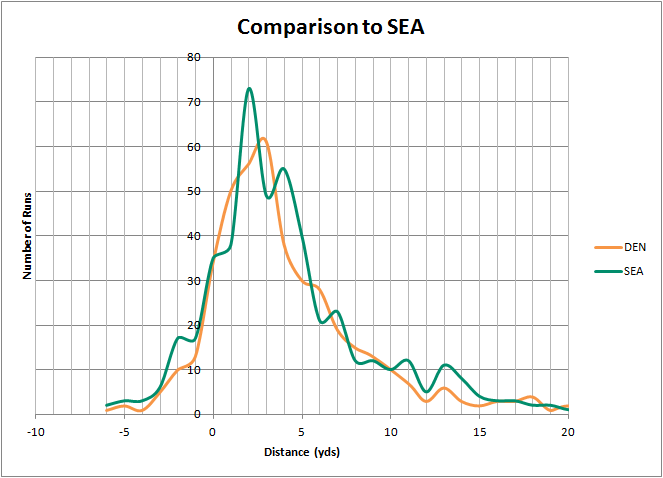 The Seahawks were good at running the ball and they ran the 509 times (2nd most in the league) to our 462. Where they really crushed our running game was the number of 4 yard runs. Just looking at the graph, you might say that where a Broncos run ended in a 1 yard gain, the Seahawks would gain 2. The same for our 3 yard runs that turned into 4 yard runs for the Seahawks. The Seahawk backs also did better once they got to the second level; we had 86 runs that went for 7 or more, while Seattle had 118. 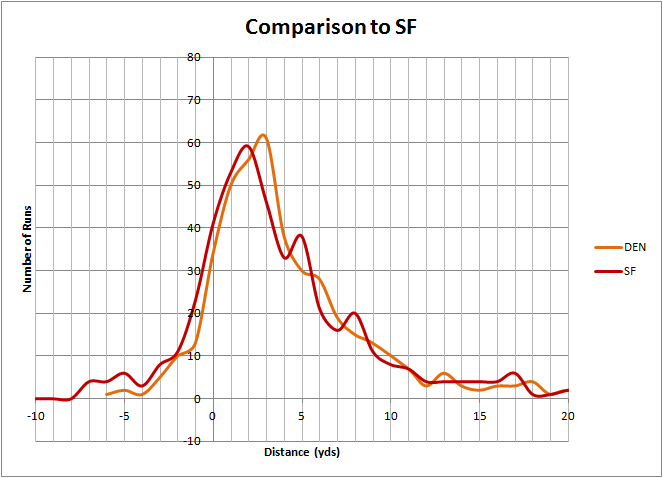 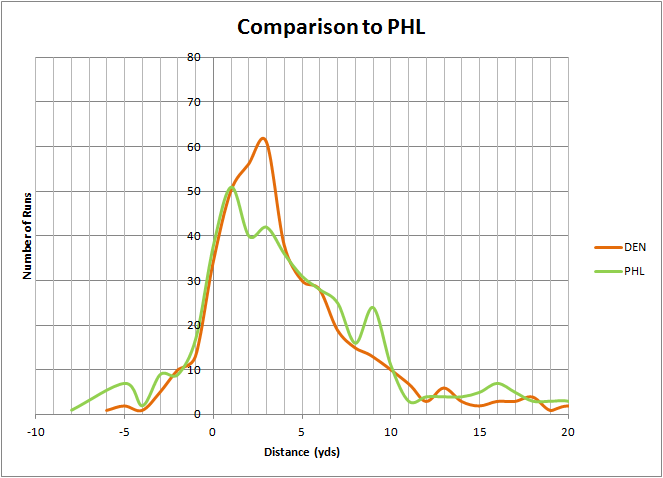 This comparison is the only one where you really need to see X-axis extended. While the Eagles had double our number of 9 yard runs and significantly more 7 yard runs, their number of runs that went for more than 20 yards really crushed ours - 11 to 5. While we had 34 runs of 10-20 yards, they had 52. If you look at "second level" runs (7 or more yards), the Broncos had 86, while the Eagles had 129.

Will we get more second level runs with Ball? I'd like to say yes based upon what he did in 2013 compared to Moreno, but we may be relying more on the #2 and/or #3 RB to get us the runs that go for 7 or more. I think the more important outcome would be the shift of our curve from last season just a little bit to the right. So that those runs we are getting an extra yard on most carries; those 2 yard carries now go for 3 and those 3 yard carries now go for 4. Ball certainly has the potential to do that relative to Moreno (Topher posted a link to average yards after contact that I can't seem to find right now). Ball was much better at gaining that extra yard or two last season than Moreno (at least in the last 6 games of the regular season) and Ball did that as a rookie. In theory has should be even better at it in his second NFL season.