Casual Friday means a shorts-and-shells practice for the Broncos, and a word from Hall of Fame defensive back Rod Woodson.

After two days of unseasonably dreary weather, the trend reverses itself into a pleasant, partly cloudy day for a change. The forecast is for mid-70's temperature and it looks like a great day for football, or at least, to watch some. As I wait for the players to come out of the locker room, I see ST's coordinator Jeff Rodgers and offensive coordinator Adam Gase chatting with Jeff Legwold. Hall of Fame DB Rod Woodson, who is interning this Camp, is talking with new friend Chip Simmons, the team's chaplain. When their conversation comes to a lull, I ask Rod if he's going to suit up. "You look good enough to play and at least you wouldn't have 2 a days."

He says, "Well that's awful kind of you to say, but no....these guys have it so easy. Do you know they're calling "afternoon ‘walkthroughs' practice?"

A fans' guide to the Broncos summer scrimmage

Who's looking good at camp? We tell you right here.

Most of the players are on the field by now and I notice that Kapri Bibbs has the blue ball. The players are in shorts and shells and at 10:25, the first HORN of the day announces the start of practice.

The special teams kick coverage unit works over at the other field, making me wonder how much visibility I will have today. The four quarterbacks are taking snaps and Peyton Manning is also handing the ball off to Montee Ball.HORN.

Walkthroughs begin with the second unit offense working on the field directly in front of me. Now Juwan Thompson is carrying the blue ball and I have a quote from after practice that will conveniently fit here.

Kapri Bibbs on the blue ball:

"There is an emphasis on ball security carrying over from last season. Different guys will have it each day."

I ask Montee Ball if the blue ball is penance and tell him I haven't seen anyone put the ball on the ground. He said:

HORN. The team stretch session starts and I couldn't even tell you what the music is today. Mark Jackson is here and comes by to say hello. After the post stretch team huddle, 7 on 7's begin on the other field and my view is impeded. Each offensive unit runs a play and then lines up where the play is finished before running the next play. I think about moving over to the south end zone, but I am hoping the team drills will move over to this field and they are working at the north end anyway. Five minutes later the next HORN blows. 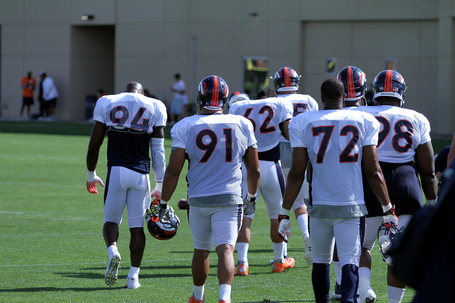 Individual position drills begin at this time. I see the linebackers running the curb hurdles sideways and a few feet away from them, the running backs are doing their version of the hurdle drill. The safeties are in front of my vantage point working on their ‘heads up' wrap up and tackling technique. The cornerbacks are doing a backpedal swivel drill and the linebackers move over and do a coverage drill while the defensive line hits the ‘shiver sled.' On the other side, the quarterbacks are doing their post-snap footwork drills, the wideouts run route trees and the offensive line manhandles each other. Somebody has to do the grunt work after all. Now the quarterbacks are working with the running backs doing handoff drills with the ‘running lane' mat.

The quarterbacks supply the arm for the wide receiver/cornerback 1 on 1 battle at the southern part of the far field. As I make my way over there, I watch the offense get the better of the defense for 5 straight plays. Cody Latimer beats Bradley Roby, Greg Wilson beats Jordan Sullen, Isaiah Burse beats John Boyett, Nathan Palmer beats Tony Carter. Kayvon Webster blankets Emmanuel Sanders and Sanders makes the catch and there was a flag on the play After Andre Caldwell gets the best of Aqib Talib, finally goes over and has a polite discussion to clarify what is going on. And I do mean polite.

There are some NFL referees out here to show how the new (old) contact rules will be enforced and the DB's are having a hard time with it. In fact almost every play in this 1 on 1 match up has drawn a flag. I'm sure this is happening all across the league and even the Seahawks will have to adjust. Jordan Sullen breaks up an attempt for Cody Latimer. Peyton Manning makes a nice sideline throw just past Kayvon Webster that Emmanuel Sanders makes a great catch on. Bradley Roby breaks up a throw intended for Bubba Caldwell and then Wes Welkermakes a catch on Omar Bolden, who had very good coverage on the play. HORN.

The team moves down to the north end to do some 11 on 11 red zone work. Since it's so far away, I don't get to see much. It looks like Brock Osweiler threw touchdown passes to Cody Latimer and Cam Morrah (or maybe Gerell Robinson). Brandon Marshall gets an interception and then Zac Dysert throws back to back touchdown passes to Greg Hardin and a third completion falls just short of the end zone. I believe Jamar Chaney had a pick also during this segment.

The next portion of practice has the special teams working on rushing the punter from the line of scrimmage. The gunners work on their final approach to the returner and shedding/evading the blocker. After a bit the kickoff team assembles to drill on their ‘get off' and into their coverage lanes. They do three or four reps before the next HORN. 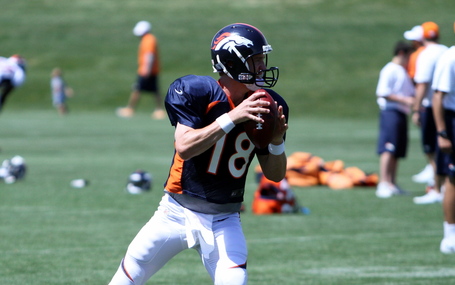 A second helping of 11 on 11 red zone action starts with Peyton Manning's first throw falling incomplete. After a quick out to Wes Welker, Manning throws a fade into the endzone for Emmanuel Sanders, but Bradley Roby is there to break up the pass. Brock Osweiler holds on to the ball too long for a coverage sack on his first snap and throws a side out for C.J. Anderson. C.J. gets around the corner and picks up 3 or 4 yards. The next attempt by Osweiler is out of bounds intended for Greg Wilson with Omar Bolden in coverage. Brock fires a bullet on a crossing route for Bennie Fowler for a touchdown. Dysert comes in and hands the ball off to Brennan Clay for a pic up of a couple yards. After a completion to Isaiah Burse with  Jerome Murphy in coverage, Dysert throws an incomplete pass out of bounds. Zac throws complete to Greg Hardin. HORN.

11 on 11's with the offense working back towards me. Razorback! Louisiana! Illinois! Omaha! Manning dumps off a pass to Montee Ball. A pass for Julius Thomas is broken up by David Bruton and then Emmanuel Sanders makes a catch on Bradley Roby. Wes Welker gets the best of Rahim Moore, even though the safety had good coverage on him. A jump ball inside the 5 at the sideline for Julius Thomas is broken up mostly by Bruton who leaps high. He was joined in coverage by Aqib Talib. Brock Osweiler has his first pass broken up by Tony Carter and then Juwan Thompson runs for 5 yards. Brock throws a long ball that Cody Latimer grabs for a completion. Kapri Bibbs picks up 4 to 5 yards after initiating contact. A small spat commences between a couple of the guys, I can't see who, but it's quickly dispersed. After all, they aren't in pads today. The next pass attempt is bobbled by 3 or 4 players and I'm not sure, but I think Duke Ihenacho comes up with the pick. The last play of the segment goes way out of my visible view. HORN.

Special teams kick coverage against the ‘red hats' with Jordan Norwood, Ronnie Hillman, Isaiah Burse and Brennan Clay taking reps as the kick returner. I also see Jacob Tamme doing some long snapping to Britton Colquitt as Aaron Brewer looks on. ST's coordinator Jeff Rodgers gives Lerentee McCray some ‘scenario' pointers about not getting caught inside on the coverage and instructs him ‘in case of this, do that." HORN.

11 on 11's make up the last practice segment. Peyton Manning dumps the ball off short to Montee Ball and then hits the running back in stride down the field on the ensuing snap. Ronnie Hillman carries for a couple of yards and Bradley Roby breaks up a pass intended for Emmanuel Sanders. Osweiler comes in and hands off to Juwan Thompson, who gets to the 2nd level for 5-6 yards. Three fighter jets fly by in formation, making it difficult to hear. Brock uses hand signals to get the next play called and ran. Omar Bolden misses an interception when the ball slips through his hands. Zac Dysert throws a jump ball for Isaiah Burse, but Jordan Sullen breaks it up. Brennan Clay picks up 4 yards on the ground. Dysert's next pass is high and hard, overthrowing his receiver incomplete and out of bounds. The last play has Zac completing a pass to Bennie Fowler. HORN.

David Bruton on if there is a mindset to be aggressive in the secondary:

"Yeah. We're trying to establish a new mentality. Go out there and make the big plays, the big hits. That's what we emphasize. Just trying to get better, be aggressive, be a feared defensive secondary."

Rahim Moore on if he is excited for the Summer Scrimmage tomorrow:

"I'm very excited. Me personally, I want to see where our defense is, see how much we've developed. I also want to see how much better I became and see if I've improved from last year's [scrimmage]. I think it's going to be a great time for out team to be able to showcase our talent and be able to go out there and have fun and make plays and get ready for Seattle next week."

I'd say Bradley Roby had a pretty good practice. More positives than negatives. Jordan Sullen and David Bruton were noticeable too.