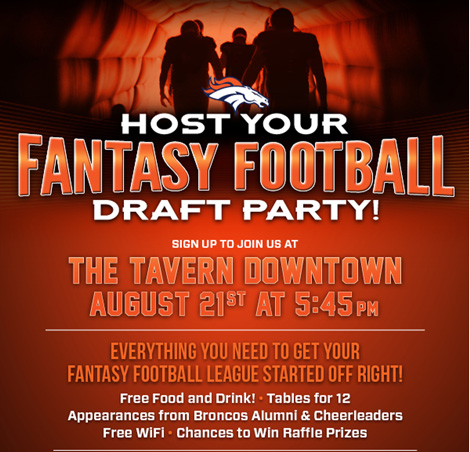 The Denver Broncos will be hosting a fantasy football draft party in cooperation with DirecTV this Thursday, August 21, which will allow over 20 fantasy leagues to draft simultaneously. The party will take place in Denver at the Tavern Downtown at 6 P.M. MT, and will include appearances from Broncos receiving legend Ed McCaffrey, as well as Broncos cheerleader and alumni.

For Broncos fans who play fantasy football in the Denver area and wish to participate in the event, there are still spots available for leagues to sign up, which can be accessed here.

Did you know?: In Ed McCaffrey's best season of his career (2000), he logged 101 receptions, 1317 receiving yards, and 9 receiving touchdowns. These numbers would have tallied 185.7 fantasy points in a standard scoring league, which would have been good enough for 10th in the NFL in 2013.

Editor's Note: SB Nation's partner FanDuel is hosting a $1,000,000 Fantasy Football Contest for Week 1's NFL games. It's only $25 to join and first place wins $100,000. Starts Sunday, September 7th at 1pm ET. Here's the link. FYI: These are just my opinions and Fanduel gave me money to play.