Brock continued his steady progression of improvement against San Francisco.

Last time I broke down Brock Osweiler's play, I grouped things by category.  We were looking to identify how Brock did with his footwork, mechanics, accuracy, and decision making.  This time around I will evaluate things the same way but instead format the layout so the information is presented chronologically by drive.

On 1st and 10 we have a quick three step drop.  Concept is pretty easy, at the bottom of the screen you have a flat route combined with a curl by Robinson.  Brock hits the back of his drop and releases the ball on time, placing it slightly to the outside shoulder.  Quick rhythm throw that Brock has shown he is comfortable with.

A false start and a CJ Anderson -2 yard gain puts the Broncos in 3rd and 11 for the next throw.

The 3-tech beats Ben Garland cleanly off the snap and makes it to Brock in about 2.4 seconds.  Remember coverage sacks occur at about the 3 second mark or later.  He muscles his way to stay upright and throws an accurate ball to CJ Anderson in the flat.  This was never going to convert, but Brock made a pretty good play just to get some positive yardage out of it.

Brock and the #2 offense got the ball back just before the 2-minute warning giving them an opportunity to practice the two minute drill in live game action.

Niners bring a double A-gap blitz that is picked up nicely by CJ Anderson.  Brock knows the heat is coming and identifies his hot read Gerell Robinson.  The ball is out at the top of his drop accurately and slightly to the inside away from the charging nickel back.

From here Brock does something curious.  Out of shotgun, he hands the ball off four straight times.  Why?  Box count.  The young QB is making the appropriate checks. 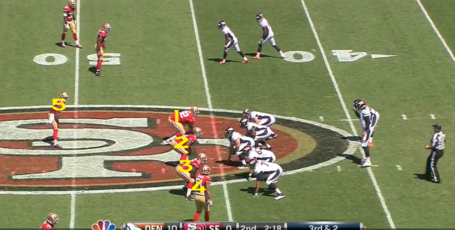 I see five in the box here.  Gonna have a blocker for each defender in theory.  CJ picks up the 1st on 3rd and 2. 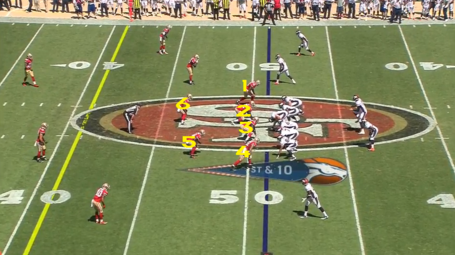 Six in the box here. 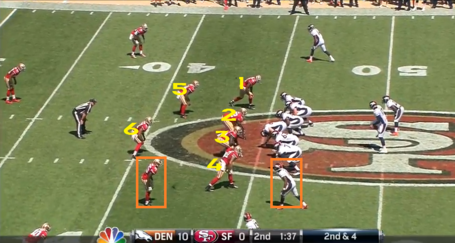 Six in the box after a five-yard gain on the previous run.  The slot defender is also close to the box but his responsibility is Jordan Norwood.

The Niners put a fifth defender on the line with a 6th linebacker in the middle.  The slot defender is now cheating to the inside closer to the box.  This is one area where Brock can take the next step.  Both corners at the bottom of the screen are showing off coverage.  Since the slot defender is cheating to the inside, this would be a perfect call for a Go/Out combo where the outside receiver clears out the boundary.  No way that slot defender makes a play on an out with his inside leverage.  Something to think about.

Jacob Tamme bends his seam route back to the inside from an outside stem.  Brock throws the ball on time and in a tight window over the linebacker, hitting Tamme in stride.  Something I'm most impressed with at this point is Brock's ability to lead receivers and give them opportunities for YAC.

This is the first pass of the day where Brock failed to hit his receiver accurately.  He does everything else well.  He knows the blitz is coming, he knows where his hot read is, and he shuffles his feet quickly to buy a split second more to pass.  The ball comes out hot but behind Jordan Norwood.  At first I thought there might have been a mis-communication and Brock expected something differently, but from another angle you could clearly tell he was throwing the route Norwood ran, he just didn't place the ball well. 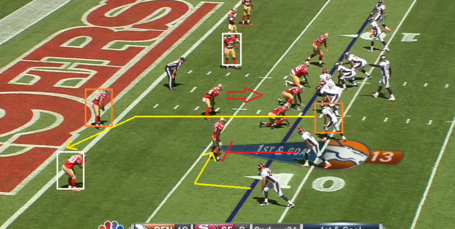 The Broncos do a lot of two-man route combinations in the redzone, this one utilizes Jacob Tamme and Cody Latimer. Looking at the read, Brock identifies the Mike and knows he will be blitzing.  The next thing you realize is that the Safety is far off the slot receiver who will be running a corner route.  This sets up perfectly for a 2 on 1 with Cody Latimer clearing the corner out on a pick (he sells an outside/in pivot but jams the corner in the chest, hesitating before re-engaging his route).  The blitz coupled with the route combination give Brock the perfect target in Tamme who looks like he actually scores.  Replay never took a look at the play.

Tamme bends inside at precisely the right distance and Brock hits him on time with an accurate ball.  He stands strong and takes a big hit on his follow-through.

Remember the clock is ticking.  So does Brock panic?  No.  They have one timeout left but he runs down the time giving CJ Anderson the opportunity to punch the ball in from the 1.  This seemed uncomfortable watching live, but Brock did the right thing. Had CJ failed to punch it in, they still could have called a timeout with 2-seconds left and kicked a chip shot heading into halftime.  As it stands, the Broncos used almost all the clock and converted for 7.

The interior of the OL does a great job pushing bodies back.  Perhaps the most impressive block was rookie Michael Schofield aggressively sealing off the playside linebacker.  He keeps his legs driving through contact.

Couldn't have asked for a better drive.  Brock utilized the running game with light box counts, successfully identified blitzers and set the protection, knew where his hot routes were, and delivered almost a perfect drive passing.  Save for one bad throw, this was a successful two minute drill.

Nothing more than a WR screen.  The corner is about 8 yards off the LOS, and this is an automatic decision anytime you have that off-coverage with a one on one.

The read is good.  You have a single high safety with off man coverage to the outside. The corner is even shading to the outside giving optimal circumstances to throw the post.  Brock just lets loose and overthrows his receiver.  His footwork looks ok, and he throws with a good foundation, but the throw comes out too hot. This is his 2nd bad throw of the game.  One final thing I noticed, Brock is pretty good at not giving away his intentions.  He keeps his eyes right before snapping back to throw to his left.

One thing that you don't see a lot of young quarterbacks do is scan through their progressions.  Osweiler scans the field right to left, and when the edge pressure is starting to pinch the pocket, he hangs in there and hits his checkdown. For those that think Brock has the tendency to break the pocket too quickly, this is a good example of the opposite.  In fact to this point, only once has Osweiler had to shuffle out of the pocket and that was due to quick pressure.

A repeat of the previous screen.  Off coverage, one on one.  Easy read and nice crisp throw.

On a 3rd and long, the protection holds and gives Osweiler the opportunity to hit Greg Wilson on a deep comeback. Notice the ball placement.  Yes it's low.  You want to know way?  The charging safety behind the receiver.  Brock is not throwing balls that are going to get his receivers killed.  He leads them when necessary, but keeps them safe over the middle.

The next two plays Brennan Clay runs for a net gain of 1 yard leaving the Broncos offense with a 3rd and 9.

There are a lot of bad things here.  Brennan Clay misses the blitz pickup.  The receivers can't get open against a deep zone.  Not only does Brock deliver a bad ball to the flat, he's throwing to an outlet 5-yards short of the marker. Brock either needs to target someone that has a shot at picking up the first, or he needs to side-step the pressure and buy more time.  This is the first bad decision he has made in this game.

Another thing the Broncos like to do is load one side of the formation and target the lone receiver on the opposite side of the field who will usually be left with a 1 on 1. Here the Broncos have four receivers to the left and Cody Latimer split to the right. Cody runs a great double move that buys him separation.  Brock holds the safety with his eyes and snaps back at the very top of his drop unleashing a beautifully placed ball that Cody Latimer hauls in for the TD.  This play exhibits all the positive progress Brock has made as a quarterback.  He reads the situation, knows where he his going, conceals his intentions, and unleashes a perfect ball after a perfect drop.

Excluding the dropback where the 3-tech reached Brock on a five step drop at approximately 2.4 seconds, Brock Osweiler's time to throw this game was 2.1 seconds.  Against Seattle it was about 2.6 seconds.  Some shorter drops and reads coupled with good timing on deeper routes gives him this sterling average.  This mark would have put him #1 in the NFL last season.

To date the Brock Osweiler and the 2nd team Broncos offense have converted 7 out of 10 3rd down opportunities. This unit has shown the ability to keep the chains moving.

When looking at drives (not counting kneel-downs), they have scored 4 TD's, missed 1 FG, thrown 1 INT, and punted 3 times in 9 opportunities.  For reference, the Broncos record breaking offense last season averaged 3.0 points per drive.  Though the sample-size is small, Oz has led the 2nd team offense to a 3.11 points per drive average.

Cody Latimer knocks out Bethea with a block

We have two very different games that are starting to give us a clearer image on what Brock Osweiler can do as a quarterback in this league.  His fundamentals are fine.  Footwork, drops, release, all of those things are vastly improved from his rookie season. Against Seattle, he faced more pressure from the front 4 and showed the ability to scramble and make lemonade out of lemons.

Against San Francisco, the Niners dropped in coverage more giving us the opportunity to see Brock read through his progressions and make good decisions.  Outside of one play, he passed the test.  The blitz does not phase Brock. Each time against the San Francisco defense he knew where it was coming from and where his read would be.

Brock is starting to do the little things that make Peyton Manning such a weapon.  He isn't afraid to check into a run with a light box count.  He is identifying his coverages, taking shots downfield when he has one on one's, and looking for the quick YAC on a WR screen when the corner is off the LOS.  We saw him read leverage on the post to Wilson (even though he threw a bad ball).

As far as ball placement, he can thread the needle over a dropping linebacker to hit his TE on a seam route.  On short rhythm passes he is leading his receivers, giving them the opportunity to get some YAC.  Deep down the field he picks spots to throw to that the defender can't get to.

When it comes to progress, I see a lot of good.  The negatives are few and seem to be things that can be corrected with more experience.  Every once in a while he will have a bad throw or make a bad decision, but that is the exception, not the rule.

Overall, I see a player that can face pressure, extend plays, hit receivers accurately at all levels of the field, and make the right reads at the LOS.

Not sure how much Brock Osweiler will play in the 3rd preseason game, but I'm looking to see him continue to build upon his impressive and consistent showings thus far in preseason.