It's up to you Broncos Country, which catch was more impressive?

This past week in practice Cody Latimer flashed some more of that big-play ability that reporters and beat writers have been raving about.  He recently released the video from his catch and I went ahead and created a gif from it.  The pass is from Brock Osweiler to the back of the endzone.

A couple of seasons ago, Demaryius Thomas showed why he has become Peyton Manning's most trusted receiver with this amazing grab against the Chiefs.

How about seeing them back to back? 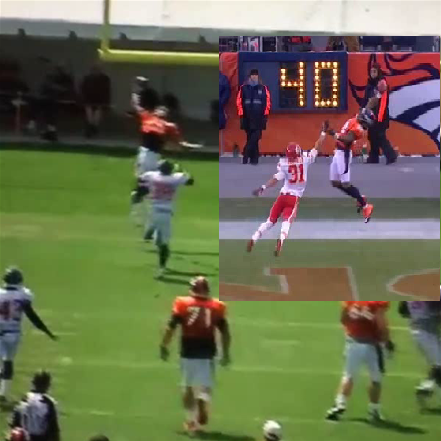 Both sky about as high as a receiver can reach, Both have to reach and extend their arms the opposite way of the way their body is moving.  Both pull in the ball and get both feet down in bounds, securing possession.  So it's up to you Broncos Country, you have the vote.

Who is the most impressive One-Armed Bandit?