After suffering a torn ACL in a 37-13 win over Houston in 2013, the Broncos defensive star made a return to game action against the Texans on Saturday night.

Peyton Manning set the single-season record for touchdown passes in a 37-13 win over the Houston Texans in Week 16 of the 2013 regular season. The victory gave the Broncos a 12-3 record, well on their way to clinching the AFC's number one playoff seed. The day should have been a day to celebrate; however, it was marred by a major injury to a major game-changer on Denver's roster. In the fourth quarter of the game, the Broncos' young, talented pass rusher Von Miller went down with an injury that would later be identified as a torn ACL, knocking him out for the remainder of the regular season and playoffs.

The Broncos wide receiver suffered his third concussion in under a calendar Saturday, leaving the Broncos' game early.

Miller watched as his team closed out the regular season with a victory over division rival Oakland Raiders, followed by playoff victories over the Chargers and Patriots, two more rival teams. He then was forced to spend the Super Bowl week and weekend on crutches, watching as the Broncos fell to the Seahawks in East Rutherford, New Jersey, unable to do anything about it.

Eight months later, full of recovering and training to be ready to play in the 2014 season, Miller made his return to Denver's lineup against the team he suffered his injury against. The Broncos' single-season sack leader participated in just the first defensive series of the game before being removed, but it was a welcome sight for Broncos fans to see the Pro-Bowler back on the field.

On the first offensive drive for the Texans, Miller played nine total snaps; on two of those Miller dropped into coverage, two plays were run plays, and five were spent rushing the quarterback. Miller did not record any tackles in his 2014 debut, but he quite nearly intercepted a pass that would have undoubtedly been returned for a touchdown. The play, which took place with 3:58 remaining in the first quarter, was a designed screen play to Texans receiver DeAndre Hopkins; Miller was, by design, unblocked on the play and had a direct lane to Texans quarterback Ryan Fitzpatrick. In the midst of rushing the quarterback, Miller made an exceptionally athletic play to tip Fitzpatrick's pass, nearly snagging it himself and returning it to the Texans end-zone for six points.

When asked how he felt playing in his first game since December of 2013, Miller told reporters that he's been feeling like himself, "but being in a game is totally different. It felt great." Mentioning that he would have liked to play more snaps, the third-year linebacker was happy and confident with the work he put in on Thursday night.

There was one play in particular where the previously-injured knee was put to the test, but Miller did not break stride on the play, continuing to put pressure on Houston's RT Derek Newton in an attempt to reach Ryan Fitzpatrick. 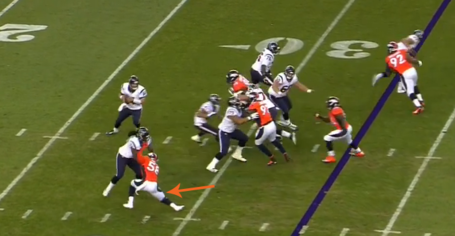 When asked if the knee in question was on his mind during the game, Miller was quick to explain that it no longer troubles him while playing, "No, I don't, not at all. I wasn't thinking about my knee at all."

With Miller on the mend and back at his 2012 playing weight, looking like he's ready for the regular season, and Demarcus Ware making plays on the other side of the defensive line, the Broncos defense could be a formidable foe for opposing offenses in 2014. The two have developed a great deal of chemistry from each other during training camp, learning from each other; Ware learning the Broncos' schemes, Miller learning the tricks of the trade from one of the all-time great pass rushers. Von knows just as well as anyone else that the sky is the limit for him and Demarcus Ware in the upcoming season, but he knows that they've also only scratched the surface at this point.

Peyton Manning gets flagged for taunting

A play after Wes Welker left with a concussion, Peyton Manning had a message for the Texans' D.J. Swearinger, who knocked Welker out of the game.

Peyton Manning gets flagged for taunting

"You don't really get that chemistry until it's like third-and-7 at the beginning of the fourth quarter and you're down like three points, or you're up by three points and you need a sack or a big play...When we get to that point, I'm confident that we'll be able to perform to the best of our abilities and I'm looking forward to getting in those situations with him."

On Saturday night, though, Miller and Ware showed that the chemistry may not be so far off. The Broncos' first-team defense came up with a stop on a third-and-six situation on Von's last play of the game. Coincidentally, Miller had the pressure on Fitzpatrick on the play, while Ware wrapped up the receiver who caught the Texans quarterback's pass before he could move the chains.

Saturday night was a big step for both Miller and the Broncos; Von has the ability to do things that very few players in the NFL can, and his return makes Denver's defense just as much of a force as their offense. If all goes according to plan, Miller and the Broncos' fully-revamped defensive line will be fully unleashed two weeks from now, and Andrew Luck better be ready to run.