Nate Irving to be used as a 3-down MLB

This has been a point of endless debate and questioning in Broncos Country. But after looking back at how the Broncos used their defensive personnel against the Texans, I am comfortable penciling in Nate Irving as a 3-down MLB. Let's take a look at how the Broncos approached some specific situations on the first drive of the game.

Share All sharing options for: Nate Irving to be used as a 3-down MLB

First of all, notice how quick Ware is off the snap.  Beat everyone on offense and defense.  Next notice Von Miller slot left over the TE.  He will check the TE and release, dropping into a short zone.  Textbook press-man on the outside with a single high safety over the top.  (Ward is responsible for the slot WR, Nate Irving passes him through his zone). 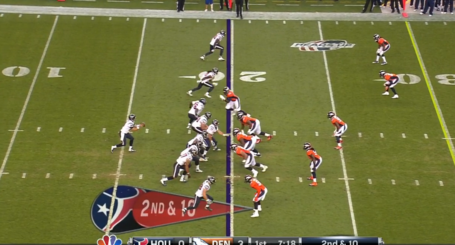 Ware once again jumps the snap and is quicker than anyone.  Nate is going to have short zone coverage on the TE. Coverage on the backside changes.  We have off zone up top. 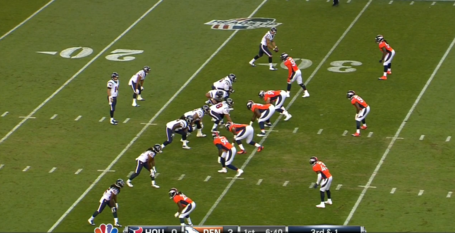 Short yardage situation, Broncos break out some trickery.  They meld their under front with nickel personnel in the secondary.  You get five-down lineman with Von Miller and DeMarcus Ware rushing from the edge to go along with run pluggers Sylvester Williams, Terrance Knighton, and Derek Wolfe.  Brandon Marshall is your single LB, Rahim Moore is playing over the top, and TJ Ward has man coverage on the slot receiver.  Talib, Roby, and Bolden are your three corners with Bolden taking coverage responsibility on the TE.

Before you point out that Nate Irving is not on the field despite the claim that he is a 3-down Mike, just know that the Broncos will have specific variations to combat specialized situations.  What sold this idea to me was seeing Nate stick around to play some nickel.

After another 1st down in their "Under" personnel, the Broncos face a 2nd and 7 against a 2-TE set with "under" personnel again.  That brings up the following play.

This is your pass rushing nickel set up or standard 4-2-5.  Von and Ware as ends, Jackson and Vickerson in the middle.  You have Talib, Roby, and Bolden as your corners TJ Ward as your match-up safety on the TE, Rahim Moore over the top, with Brandon Marshall on the outlet (RB) and Nate Irving playing a short zone in the middle.

Trusting Nate to stay on the field in nickel situations gives the Broncos a lot of flexibility, and as you can see still gives them quality matchups across the board against 11 personnel.

After another variation on the "under" front on 1st and 10, Broncos go back to nickel 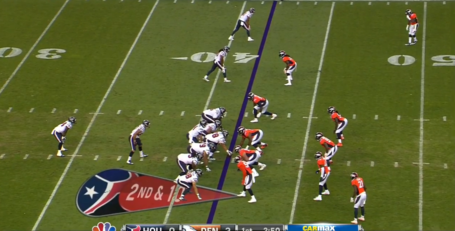 Wolfe and Williams inside, Ware and Miller outside.  Irving and Marshall your linebackers, Rahim over the top with TJ on the TE who lines up as a FB.  Bolden in the slot, Roby and Talib outside.  Texans end up running the ball for 3 yards.

We have repeated evidence on just the first defensive drive of Nate Irving as the MIKE in nickel situations. 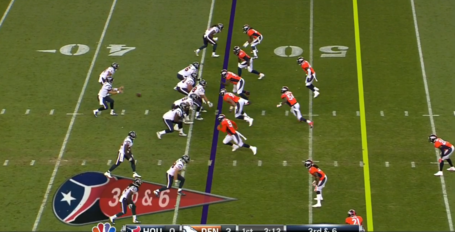 Here the Broncos take Irving out of the game and use their dime package.  Marshall remains on the field as the only LB with Ward right next to him.  Talib, Bolden, and Moore are in your trips coverage cluster at the bottom.  Roby is at the top of your screen, Quinton Carter is now playing centerfield.  On this play Ware drops into coverage while Marshall and Ward blitz.  These are some of the zone blitzing principles I've mentioned in the past.

For just a preseason game the Broncos showed quite a bit of creativity with their personnel.  We'll track it during the season, but I would safely pencil in Nate Irving as a 3-down player until further notice.  The Broncos only took him out of the game when they played a funky variation of their bass + nickel hybrid (5-1-5), and when they played Dime.

The Broncos still have tons of flexibility with the nickel, but when they play their standard 4-2-5, Irving is your man. He should even stick when they go 3-3-5, though we won't see that extensively until the San Francisco game.

That Dime defense will be their go to formation on most 3rd downs (say 3rd and 4 or longer, depending on personnel).  It gives them the ultimate flexibility with personnel to bring pressure from just about anywhere.  Be excited folks, the defense is going to be every bit as fun to watch as the offense!