What Peyton Manning did for this fallen Broncos fan will touch your heart.

You probably didn't notice the unfamiliar name written on Peyton Manning's hand towel during training camp practice last week. We didn't. Such subtle acts sometimes need to be pointed out.

"Chris Crowson," the hand towel read, and thanks to a curious Redditer, we now know the story behind Crowson, Manning, and the hand towel.

Chris Crowson is the name of a young man in North Carolina who passed away unexpectedly on June 13th, due to complications from surgery. At age 28, Crowson was a huge Broncos fan, despite his and his family's moving from Colorado roughly 20 years earlier; that fandom continued from his trips to Broncos training camp.

"Everybody who knew Chris knew of his love for the Broncos," Chris' father, Dan, said on The David Glenn Show in North Carolina. Just reading Chris' obituary punctuates this love.

Chris is fondly revered as a goofy teddy bear with a heart of gold. He brought an abundance of joy to all who knew him and loved him. He loved almost every sport, but his true passion was the Denver Broncos, a handed down tradition for three generations. ...

In honor of Chris' love for the Denver Broncos, the dress is casual and you're encouraged to wear your most favorite professional football team jersey or team colors as long as it's not the Seattle Seahawks (yea, we're sore losers...).

So how did Peyton come to know of Chris?

Chris' uncle wrote Peyton shortly after he passed away, Chris' father said, "to let him know Chris' love for the Broncos, and his respect for Peyton, and what he brings to the Broncos."  Then, days into training camp, Chris' uncle received a package from Manning containing the towel, autographed by Manning, along with a picture of the Broncos quarterback holding the towel. 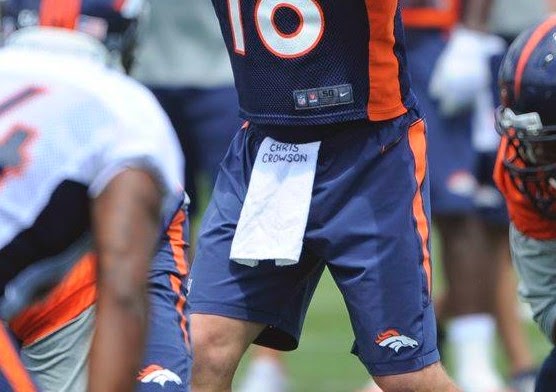 "We didn't know anything was going to happen," Chris' father said. Peyton had made sure this family's loss didn't go unnoticed.

Manning is known for his personal touch when corresponding with fans - for taking the extra time after practice to sign autographs, each and every session, or for his handwritten letters to fans and colleagues. But something tells me this simple gesture will ripple through the Crowson family - and Broncos Country - in enduring fashion. I certainly won't forget it.

What will become of the towel?

"It is in Denver," said Chris' father. "I think, because Chris loved his sister as much as he did, I think we'll probably frame it and give it to her."

"We're just amazed at the number of people that are responding to us via email. Our house is open to the Broncos, to the friends of Chris," Chris' father continued. "It's just one big happy family - saddened by the event that happened. but this also gives us another very fond, fond memory. At times like this, you want to make sure you surround yourself with every positive influence you can.

"And I just have to say, and I don't know that he will ever hear this, but I have to thank Peyton Manning, because he has given us an absolutely wonderful memory."