Next man up. With Montee Ball out with an appendectomy (we wish him well) and Emmanuel Sanders out with a right quad strain, it was time for Ronnie Hillman, Andre Caldwell, and Cody Latimer to step up in Broncos training camp.

I just know it's going to be a good day when one of the first faces I see at Dove Valley this morning is Broncos legend Rick Upchurch. Today's session will be in shoulder pads and shorts. The JUGG's machine is sitting at the south side 25 yard line on the far field and set up to launch kickoffs towards the north end zone. Most of the players are already on the field, including one returnee from the walking wounded, Louis Young. At 8:50 am, the HORN announces the commencement of practice.

The special teams work on their get off and into their coverage lanes and I see the quarterbacks taking snaps from Manny Ramirez, Will Montgomery and Matt Paradis. Another set of players are doing a fumble recovery drill near the sideline. The up men on the kick return unit are also fielding missiles from the JUGG's machine. HORN.

Everything you need to know for the Denver Broncos' August 7th preseason opener against the Seattle Seahawks.

The defense goes to work on the field in front of me and the offense works on the opposite field. The offense is doing walkthroughs against a scout team while the defense does the same in front of my position. The base linebackers are Von Miller, Nate Irving and Danny Trevathan. When they move to a nickel formation, T.J. Ward and Trevathan fill the linebacker spots. Jack Del Rio is calling plays for different situations in preparation for Thursday's game. A mix of 1st and 2nd teams are also being employed during this time. HORN.

It's time for the individual position drills to begin as the music continues. The running backs run their hurdles, the receivers run route trees and the quarterbacks use the same type of hurdles as the RB's and slalom up and back in a footwork drill. The Foo Fighters "Everlong" strains through the giant speaker at the northeast corner of the facility as the defense does wrap up tackle drills at quarter-speed, with each position working with their own positional teammates one on one.

Steve Miller cranks out "Jet Airliner" as the defensive backs do a back pedal-pivot and catch a ball thrown at them by a coach. This turns into a back pedal and break on the ball drill as the coach keeps firing passes at them. Van Halen's "Ain't talkin bout love" is the next tune as this segment looks to be as lengthy as yesterday's. As Eddie Van Halen's guitar riffs fade into the air, the HORN awakens me out of a melodic daydream.

It's time to work.

11 on 11's at the 2 yard line and moving toward midfield. I run around to the northside endzone at the far field for a decent viewpoint in time to see a quick Peyton Manning pass intended for Cody Latimer is broken up. Ronnie Hillman gets 5 yards up the middle. Brock Osweiler fires a sideline pass to Gerell Robinson. Juwan Thompson runs for 3 yards. and a scrum tries to start, but is quickly stifled. The next play is beset by a false start penalty. Another pass to Gerell Robinson and Zac Dysert steps in.

On Dysert's first snap, he ends up taking a safety which brings an encouraging comment from coach Fox about play execution. Kapri Bibbs runs up the middle for 10 yards. Zac completes a pass to Brennan Clay and then Clay picks up a couple of yards on the final snap. HORN. 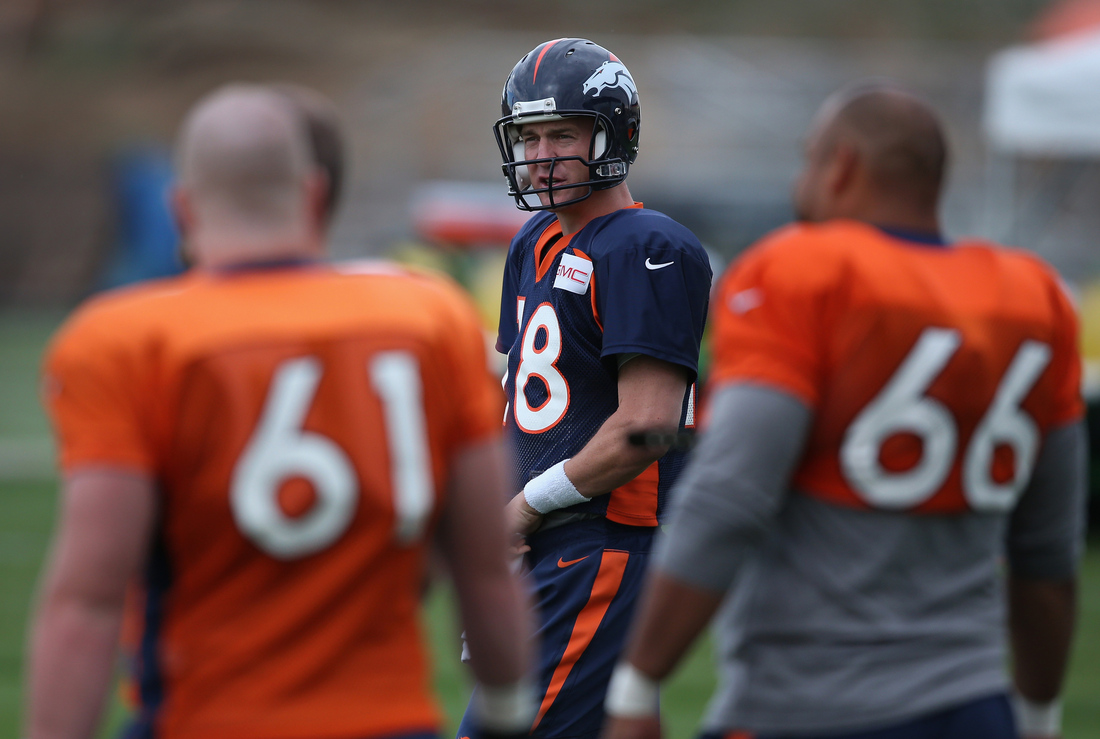 7 on 7's make up the next segment. Peyton Manning completes a pass to Julius Thomas, who is popped by Nate Irving. Julius then makes a catch on a crossing route in front of Quinton Carter. C.J.Anderson grabs a swing pass and turns ot upfield. After a completion to Demaryius Thomas, Julius Thomas drops a pass.

Brock Osweiler throws a pass to Kapri Bibbs, who is immediately popped by Lamin Barrow. As a side note, when I say popped, I mean the linebacker hits them with a wrap up, but doesn't lay the ball carrier out or anything. It's like an impact at half strength. Juwan Thompson runs for 4 yards with Brandon Marshall on the tackle. Gerell Robinson drops a pass and then Brock hits Isaiah Burse. Zac Dysert's first attempt is intended for Jameson Konz and broken up by Charles Mitchell (who by the way, left practice early with a tweaked hamstring).  Dysert's last attempt bounces short of his intended receiver. HORN.

The next portion consists of the wide receiver/cornerback one on one drills in the southern red zone area while 9 on 7's work at the north end. Peyton Manning hands off to Ronnie Hillman for 4 yards and then hits Julius Thomas on the next play. They run Hillman to the right, but Virgil Green can't complete his seal block and the play fizzles.C.J. Anderson runs left for a short gain and then Manning completes a pass to Julius Thomas.

I make my way to the south side and see Wes Welker make a catch. Bubba Caldwell has his chance broken up by Kayvon Webster. Jordan Norwood makes a catch on T.J.Ward and the next pass is just long for Demaryius Thomas, who is guarded by Omar Bolden. Andre Caldwell beats Bradley Roby and Demaryius Thomas beats Aqib Talib. Then Peyton Manning and Julius Thomas turn Rahim Moore completely around as the tight end makes the catch. Wes Welker pushes off Jerome Murphy in the end zone. HORN.

After a short water break, the special teams kickoff unit spars with the red hats. I'm still at the south end zone and I see the quarterbacks come over to the near field and perform rollout passes to the ball boys and Chris Harris, who has removed his helmet. I don't see any limitations in the Harris' movements, so I am assuming they are still holding him out of the full team drills. No matter, I can see him smiling just to be on the field. Behind them and working towards the other end of the field, Britton Colquitt is punting to a ball boy in the northern end zone. HORN.

Ronnie Hillman runs for 5 yards and the clock runs down to the 2 minute warning. They are even simulating the actual routine, with the waterboys going out to the huddle and hydrating the players as the quarterback and offensive coordinator discuss strategy. Peyton gets the defense to commit a neutral zone infraction and the result is a 1st down. Kneel down to end the game.

The second unit has the same objective. Brock Osweiler's first attempt for Cody Latimer ends up as a pass interference called on Omar Bolden. Kapri Bibbs picks up six on the next play. Osweiler tries to lure the defese into a penalty. Kapri Bibbs picks up the 1st down. After the 2 minute warning, he kneels down (They don't waste actual practice time going through 3 or 4 kneel downs).

Zac Dysert and the 3's get their opportunity as the young quarterback completes his first pass to Brennan Clay for 8 yards and another shoving match takes place. Clay gets the handoff again and gets a 1st down. Dysert scrambles on a naked bootleg to the backside of the play and runs a good 20 yards before going out of bounds. HORN.

The special teams kickoff coverage unit works against the red hats for 10 minutes before the next HORN.

11 on 11's begin the last practice segment. Ronnie Hillman runs up the middle for 6-7 yards and picks up a couple more on the next snap. Ronnie runs around the left side for about 5 yards and then C.J.Anderson runs for 3 yards and 5 yards on consecutive carries. Zac Dysert is picked off by T.J. Ward on his first snap and Nate Irving gets out and blocks for his teammate on the return, which isn't finished off. Zac hits Bubba Caldwell and then Kapri Bibbs rushes for 3 yards. After a swing pass is complete to Juwan Thompson, Bryn Renner gets the last 2 snaps of the day. He passes complete to Jordan Norwood on the first play and Jerodis Williams gets the last carry. HORN.

Demaryius Thomas and Andre Caldwell do some post practice work with Peyton Manning.

Sylvester Williams on how much you can learn from the first preseason game:

"You can learn a lot. You can also see what type of depth you have on the defense and offensive side of the ball. Everybody's not going to get a lot of reps and they're going to try to roll in as many people as they can. It's a good opportunity to see how you look in backups and second team groups too."

"If I could give him a grade right now it would be an A. He's been doing excellent. He came in and did pretty much what I thought he was going to do and that was just ball out and give himself a chance to make the team and help us win this year. I'm really looking forward to playing with him this year and he's getting better everyday."

Bradley Roby on his first game:

"I'm just excited. I love games. Practice is cool, but I just love to play games, so I'll be ready."

On facing Peyton Manning in practice:

"It can be frustrating because you can be in great coverage and he'll stick it [the ball] in there where only the receiver can get it. But it only helps because in the season, those guys aren't going to put it in there like he does. He's a Hall of Famer, one of the greats of all time. So going against him, making plays against him is giving me more confidence to go against other guys."