Thankfully, the refs removed all of the happy feelings to give the Seahawks some false confidence going into Week 3. Should be fun!
New to Mile High Report? Sign up here and join the discussion!

With the first half in the books, I am fairly pleased with how well the Denver Broncos played in all phases of the game. The only anger comes from the referees as the Seattle Seahawks could only muster points by the grave of the zebra's. Sure some of the calls were legit, but those legit calls wouldn't have happened had the phantom ones ended those drives as they should have. 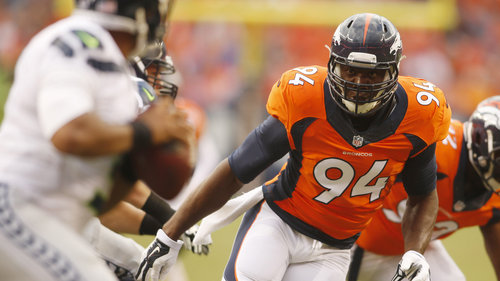 That said, the questions left us after the 40-10 preseason beat down won't be in question this year and Week 3 cannot get here soon enough for me. Without Von Miller, Chris Harris Jr, Kevin Vickerson and Montee Ball, the Broncos came out and punched the defending champions right in the mouth. As much as the Super Bowl sucked, its a new season and so far I am loving what I am seeing.

One last note on the first half. Demaryius Thomas is continuously open yet again against this so-called "Legion of Boom", so allow me to offer up a plea to John Elway to lock him down for the next half decade.