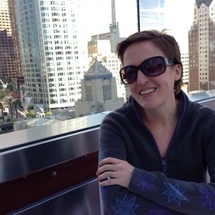 Bio: I grew up in Montana so I should have been a Broncos fan early on, but sadly I was not. I was however born half Buckeye and spent every other Christmas in a tiny town outside Columbus, Ohio opening presents under a scarlet and grey Christmas tree, learning about how awful everyone and everything was from the state of Michigan.

I was much more a film person than a sports person growing up. I spent most of my 20's and early 30's in Los Angeles preserving and restoring classic films. I'll watch a silent film or a Marvel film - I love it all. I adore Star Wars so much I took a contract job at Skywalker Ranch even though I lived so far away at the time I think I paid more in gas and tolls than I made in salary (it was totally awesome and worth it).

Confession time: I have really only been a Broncos fan since 2010. (gasp!) That was the year my husband and I got our Broncos season tickets. Even though one of my first Broncos games was the 14-59 loss to the Raiders I immediately felt like the Broncos were "my team". I fell in love with the Broncos when they were down, devoured everything I could read about the team during the crazy, fun Tebow year, and my interest in the game and the Broncos in particular just snowballed from there.

My daughter grew so tired of me watching football last year that I somehow ended up telling her she could be a Jr. Bronco Cheerleader this season.  And yes, that means I do spend a bit of time around the Broncos Cheerleaders - her squad leader is Kate :) I've only seen the Broncos play once outside of Mile High Stadium. It was earlier this year. In NJ. Blah.

I decided if I was going to spend so much time reading about the Broncos I should start writing about them. So I created Denver Sports Community Events, which tracks the community and charity events of the Broncos, Avalanche, Rockies, and Nuggets (I have been neglecting it but plan on spending more time on it soon). From there I wrote for two FanSided sites, Mile High Maniac and Predominantly Orange, before joining Mile High Report. I hope to be here for a long time.

When I'm not writing about the Broncos I'm having fun with my husband, 2 kids, and 3 cats (I know, 3 is too many). In addition to regretting not being a Montana Broncos fan early in life I also regret not learning how to ski as a child because it's pretty much illegal to not ski here and learning as an adult has been an adventure in itself.

Favorite Post: Probably my favorite post about the Broncos was something I wrote at PO - 5 Reasons You Should See the Broncos Play at Mile High Stadium - because it focuses on the amazing Broncos fans.

Favorite MHR post: That would have to be my only MHR post asking if Ewald would be the next man up for the Broncos. I really appreciated how quickly Elway answered my question!