Can the Denver Broncos beat the Indianapolis Colts to move to 8-0?

Each week we ask you all for score predictions and until last week Mile High Report was the best score predictions across all of SB Nation, but no one expected the 19 point drubbing last week and this blog fell to second place after that blowout win. And I'm okay with that - because "blow out win".

Share All sharing options for: Can the Denver Broncos beat the Indianapolis Colts to move to 8-0?

After the most impressive win of the year, the Denver Broncos are 7-0 and on a collision course with both the undefeated New England Patriots and Cincinnati Bengals later in the year. Both games will likely determine homefield advantage within the AFC.

Given that fact, this road test against the struggling Indianapolis Colts is a very important game for the Broncos as they must maintain solid position for those two later matchups.

With Peyton Manning returning to Indianapolis with two big-time quarterback records within reach, I think he comes out and simply has his best game of the year. By best game of the year, I mean he leads the Broncos to scores on nearly every possession and the Colts will leave the game shell shocked by what they just went through.

Andrew Luck will battle hard to try and make a game of it, putting up the most points against the Broncos defense (when excluding pick sixes) all season. To no avail as that same Broncos defense is going to get some turnovers and keep this game just out of reach for Luck and the Colts all game long.

What grade would you give Gary Kubiak? Week 8 was great; make Week 9 another fantasy win

I can't discount the Colts. I did it back in January, and, well, that brutally sucked. In that game, the Broncos were at home, and I believe they were eight-point favorites. This week, they're on the road, and they're five-point favorites. And even though everything is trending in the Broncos' direction when looking at both teams, maybe the Colts offense finds a spark with their new offensive coordinator. Maybe welcoming Peyton Manning back to Indianapolis lights a fire under these Indy players. Maybe Manning feels some pressure in his old dome and has a bad game.

All of that being considered, there's the Broncos defense, which I can't discount either. They've been historically great all season, and they're trending up to boot. I don't expect them to have another utterly dominating performance, because those things don't generally happen two weeks in a row. But I do expect them to perform to the level they have all season, which is enough to overcome any random bounces of the ball or a bad day from Peyton.

This is going to be David vs Goliath, except the proverbial David in this case is going to get stepped on like a bug. Indy's offense is a mess of washed-up players and derpy QB play while their defense outside of Vontae Davis is pretty mediocre. I expect this game to steadily go sideways for the Colts much like what happened to Green Bay while Denver brings a revitalized rushing attack to Indy and churns its way to a solid offensive performance.

This feels like a trap game, but Denver will walk away with another win. One of these weeks, Peyton Manning is going to put up Peyton Manning numbers. This may be that week. 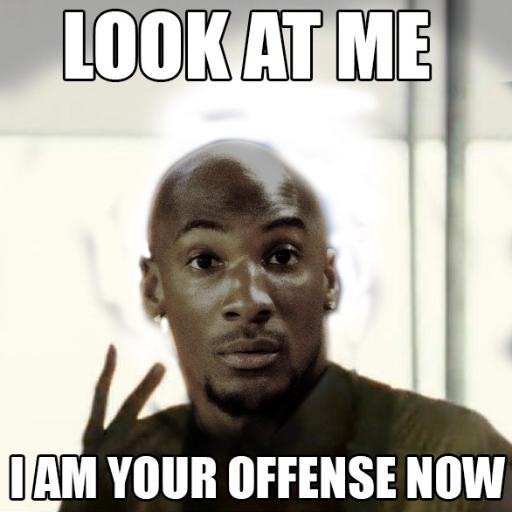 My prediction is an unadulterated, unashamed, and thorough beatdown of the Colts. There's one QB in the NFL who throws more INTs than Manning, and that's Andrew Luck. The Colts are turning into a dumpster fire, so how anyone, including their fan base, can claim that they will lose by only 14 points is laughable. Simply put, our defense will smother their offense. They probably won't have TY Hilton, so even Jack Del Rio can scheme to beat them this time around.

All joking aside, our pass rush will get to Luck and make his already hurting ribs and ankle even worse. Our linemen and linebackers will lock down their running game, our corners and secondary will destroy their passing game, and Von Miller and DeMarcus Ware will eat greedy. Not only will our offense continue to gel, but I can see at a minimum of one if not two defensive scores. This game won't even be close. But with that being said, I'm sure Luck will pull out a bit of garbage time scoring like he always seems to do in order to not be considered a joke of a quarterback because his stats will look pretty even though it is in prevent defense garbage time.

For anyone predicting this to be a trap game, remember this: You can't have this be a trap game when almost every starter on this team was playing last January when the Colts embarrassed us in Denver. They have revenge in their eyes, and believe you me, they will extract every last ounce of it on the hapless dumpster fire we know as the Indianapolis Colts! Prediction? PAIN!

Broncos' D has chip on its shoulder against Colts Scouting the enemy: Indianapolis Colts

The Broncos offensive mojo has returned! Peyton throws for two touchdowns, one to new arrival, Vernon Davis. Ronnie Hillman finds his way into the endzone for another touchdown. The Denver D harasses a battered Andrew Luck and returns a sack/fumble for yet another TD to ice the game early in the 4th quarter. I'm also saying McManus gets in on the action too, because, why not?

With the instability the Colts have offensively and defensively, I don't see them putting up much of a fight against the Broncos. Even though they will have the advantage of a home field crowd, I believe the tenacity of Denver's defense will silence Lucas Oil Stadium early in the first half. Much to the chagrin of Colts fans across the country, they aren't going to fair well against Denver which could ignite a second half of the season downward spiral that will have negative ramifications for their coaching staff.

I fully expect the Broncos to come out firing on all cylinders to continue their streak of success this season and remain undefeated. Denver's offense will put up another great performance and the running game will be strong once more. Manning will be able to make some big plays down the field to give the Broncos a lead the Colts won't be able to overcome.

Give us your score predictions, Broncos Country!