There's not much Joe Don Duncan can't do. He can catch, block, and snap. Can he make the team this summer?

Joe Don Duncan's journey has been anything but predictable.

Duncan spent two years at El Camino, a junior college, as a blocking tight end before going to Dixie State in 2011. In one year, Duncan went from lining up with his hand on the ground at ECC to being featured as a slot tight end in DSU's offense.

"I probably caught 15-20 balls in the two years I was there," Duncan said of his time at El Camino. "To put that in perspective, I had 14 catches in one game at Dixie State."

He set school records for catches (64), receiving yards (949), and touchdowns (9) in his first season with the Red Storm. Injuries prevented him from playing in 2012, but he continued breaking DSU records in 2013.

As a senior, Duncan broke his own single-season records for receptions (71), yards (1,045), and touchdowns (11). His gaudy numbers caught the attention of NFL scouts, and he was invited to play in the Senior Bowl and East-West Shrine Game.

Again, injuries slowed him down.

Duncan underwent foot surgery in 2014 that prevented him from playing in any bowl games. The surgery also prevented him from participating in most of the drills at the NFL combine. He did bench press 225 pounds 35 times, more than any other tight end at the event (for the sake of comparison, consider that New England's Rob Gronkowski — arguably the best tight end in the NFL — benched the same weight 23 times in 2010).

Duncan met with several teams at the combine, including the Ravens. At the time, Gary Kubiak was Baltimore's offensive coordinator and Brian Pariani was the team's tight ends coach.

"We sat down and we had a really good meeting and we were in contact after that," Duncan said. "I was hoping I would end up going to Baltimore (in the draft), but because of medical issues, I didn't."

Duncan knew that coming from a Division II school did not help his chances of being drafted. His recent foot surgery made his chances even slimmer. But he was still hopeful.

"There was a hope. I thought I'd go in the later rounds — five through seven. I knew being injured throughout the whole draft process didn't help anything. But I was optimistic." 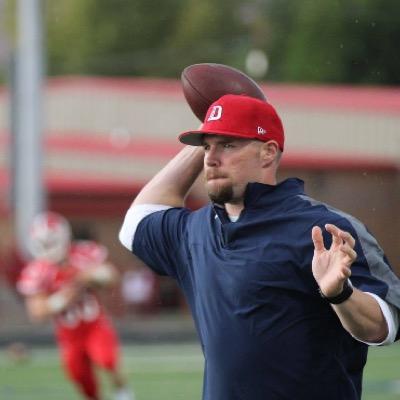 Duncan coached for a year at Dixie University.

The Ravens presented Duncan's best shot of being drafted. They chose to pass on him, and he went undrafted. No teams singed him as a college free agent.

After the draft process concluded, Duncan returned to DSU to coach the school's receivers during the 2014 season. While coaching, he continued working with the team's strength and conditioning coach.

Fast forward a few months later and Kubiak had become the Broncos' new head coach. Pariani had followed him to Denver to coach the team's tight ends. Shortly after Denver hired Kubiak, Duncan's manager and agent sent out feelers to teams. The Broncos were interested.

The team flew Duncan to Denver last Tuesday to try out.

"They put me through a bunch of drills — forty's and all that stuff. They just wanted to make sure I could still run around."

Duncan went through numerous drills similar to those seen in the video below:

Denver was intrigued by Duncan's versatility, and they had him work at various positions, including fullback.

"Pretty much the whole coaching staff was out there," he said. "I was put through a bunch of drills — tight end, H-back, and fullback stuff."

Kubiak and general manager John Elway were both present for his workout. His ability to play fullback is notable because Denver does not currently have a fullback listed on the roster. They plan to use one this season, but it is not clear who it will be. Duncan is one of several options.

"I can see myself having my hand on the ground and moving a guy in the backfield and helping the run game out," Duncan said. "Pass blocking, getting out in the flats, all that stuff. I think it's something I can do in the future."

One of the primary roles for fullbacks in Kubiak's offense is lead-blocking for running backs.

The team also had Duncan practice snapping for punts and field goals (he did both at DSU). In college, Duncan spent time on all of the special team's units. His versatility as a tight end, fullback, and special team's player is his greatest asset. Teams are only allowed to dress 46 players on game days, so players that can fill (or backup) more than one position are invaluable.

"I ended up signing, so I think they liked what they saw."

Duncan is required to report back to the team's Dove Valley headquarters on April 13. He plans to return a week early.

"I want to get acclimated, not only to the elevation and weather, but also meeting everybody that's there right now. I'll be out there a little early so I won't be the new guy on campus when Day 1 rolls around."

When practices do start, Duncan will likely spend most of his time with the tight ends. He has a prototypical tight end body — he stands 6 foot, 4 inches tall and weighs in at 270 pounds — and he showed at DSU that he has the ability to wreak havoc on defenses as a receiving tight end.

"I modeled my game after Jason Witten," he said. "As I've gotten older and more mature, I'm trying to model my game after him as much as possible."

Witten is 6 foot, 6 inches tall and weighs 261 pounds. Since being drafted by the Cowboys in 2003, Witten has been to ten Pro Bowls. He holds the team's all-time record for receptions with 943.

Some have compared Duncan's style of play to Gronkowski's.

They do have similar traits, but Gronkowski is a Super Bowl champion. Duncan is an undrafted rookie trying to make the team any way he can.

"There's a reason he's Rob Gronkowski, 6-6, a three-time Pro Bowler, and all that stuff. I've got a ways to go, but it's a fair comparison I think."

"I'm just going to go in and bust my ass on and off the field." -Duncan

Gronkowski also shares a similar injury history with Duncan. Gronk missed five games in 2011 and nine games in 2013 because of injuries. He returned to form last season, catching 82 passes for 1,124 yards and 12 touchdowns.

Duncan is also healthy now, and he's looking to prove his reliability.

"I think that was one of the biggest things that held me back last year," he said. "It's been something I've been focusing on the past year, making sure that I'm healthy. Because I knew a lot of teams were worried about the medical thing. Going into the workout with the Broncos, I knew that I was finally healthy. I can perform like I did last year and I got all the checkmarks that I need through the physical process. So I'm good to go."

Now that he's healthy, Duncan's potential is off the charts.

Matt Waldman of Football Outsiders ranked Duncan as the No. 3 tight end prospect going into last year's draft. Denver has seen the film, and they have seen him drilled at multiple positons. They're giving him a shot, now he has to take advantage of it.

"I'm just going to go in and bust my ass on and off the field," he said. "I'm going to take care of everything on my end and let everything else settle in. There's only a couple things you can control, and one of them is effort. I'm going to make sure that I know as much as possible. Every opportunity that I get I'm going to take advantage of it.

"With the position they will have me playing, I think I'll be very successful in this offense."

Will Duncan make the team?