*Editor's note: All the credit for this goes to FrenchFred as he wrote it...and no stat-calculating devices were harmed in docllv's help to publish :)

As some may know me a bit, I am a stat kind of man, and I love them. I understand that stats don't tell the whole story, but they are fun to play with.

As such I wanted to see how the trend is for Trevor Siemian (TS), and a bit more at the end... Yes you better read this article to the end ;-)

(*note: all stats were based on those available on NFL.com or ESPN.com for the QBR stat only).

This trend is quite easy to see by using the NFL.com QB rating and ESPN QBR:

The fun part is that the raw lines are somewhat different as the best QB rating of TS is noted as one of his worst from a QBR point of view...

The not-so-funny part is that the trend lines for both are very similar and not going in the right direction. 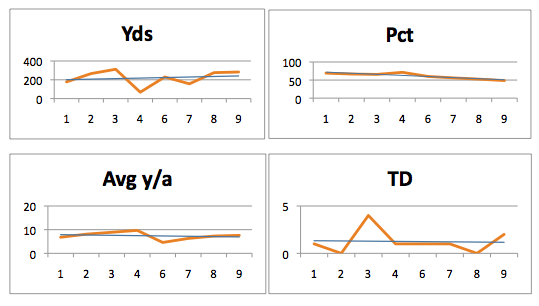 However, if there are fewer negative trends, one is still critical and needs to be corrected ASAP:

Interestingly, the trend for sacks is pretty good (would have loved to find a hurry stat per week, but couldn't), which could lead to 2 possible conclusions:

Before you all scream that the O-line is the worst of the league and it's all thanks to TS, you need to know that NFL.com keeps track of the o-line hurries allowed; and Denver O-line is just 12th (not good but far from bad) with 50 pressures allowed (73 for the Browns and 68 for the Colts)...

So the sack rate is pretty good, but there is a bad trend that began last week: TS is now fumbling (even just a bit), and unfortunately they aren't bouncing our way much...

I know the title of the article says "and more," but don't worry, it comes right now: 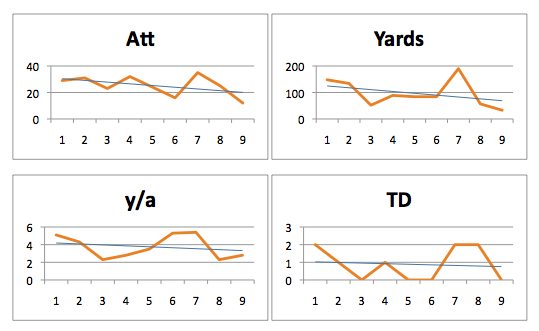 There is clearly an issue with our early play calling, and it is killing us right now. The coaches try to ignite the passing game to open the run (in theory, it's good for the WCO), but it's not working and it obliges us to go 1 dimensional because we are always 1 or more scores behind...

When we are running a lot, we are getting more yards/attempts, and every time we run a lot, we are winning: The coaches have an easy solution in front of them to be successful in the short term and in the playoffs: RUN THE DAMN BALL A LOT!!!

It's time to begin the game with a "Run, Run, Pass on third down" strategy. Establish the run to set up the pass as the opposite is clearly not working (our only first quarter TD came from an 11-yard drive, which is pathetic)...